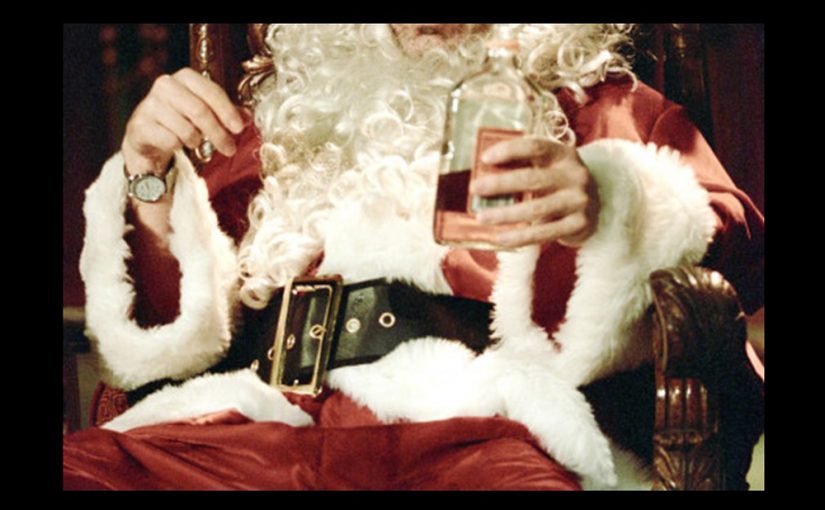 Here’s a “Conspiracy Theory” for you. Why is it that a majority of the world’s political leaders all the way down to the state Governor level and in large cities, the Mayoral level, are so much in lock-step with this COVID19 bullshit, which was/is a planned and simultaneously carried out event that has taken place, and why are they also in lock-step with the “New World Order” and the “Great Reset” as well?

Let’s think about this for a minute. If all the various conspiracy theories are related, interconnected, like the New World Order agenda (one common government body, financial/currency and a religion of some kind), “Eugenics” (the culling/elimination of several billion people), and an obedient people that is left over to be slaves to their masters, there has to be some type of motivation involved.

Here’s what I think that motivation is. Imagine if you were someone at a high level in politics and in industry. You have dutifully been attending annual meetings like the World Economic Forum in Davos, Switzerland, the Bilderberg Group, Bohemian Grove, and the the Illuminati just to name a few.

You know what the plan is based on, in some cases, decades of careful preparation and planning. You are a Governor of a state, (pick any), and besides having risen to the top like the cream in milk, you are very wealthy as well. You have been raised in a part of society that looks down on the rest of humanity because after all, you ARE special, you are better than the common folks, right?

You are naturally motivated to be a part of this entire plan, the “Great Reset and NWO”. You as a Governor, Senator, President of a country, know that when all is said and done, and the primary goals of the Elite/Cabal are achieved, YOU, will be part of that ruling class of a new type of societal structure that is well taken care of. You also know that your future generations of your immediate family will be “In Like Flynn” as well.

It’s not about money so much as it is about power. Our financial systems that all our economies are based on today are antiquated compared to what the Elite/Cabal has designed for you. Why do you think there is a plan to “Chip” every human on the planet? You have seen the evidence of their plan. Without the “Chip” (which will eventually evolve from that tiny thing surgically implanted somewhere in your body, to a device that will be injected into your blood stream, perhaps altering the structure of your DNA?

Without the device, whatever it ultimately ends up being, a person will not be able to buy food, shelter, fuel, anything. Some folks equate it to the “Mark of the Beast”, I just say it’s the ultimate desire of the Elite/Cabal to wield ultimate power and authority over all of mankind, (a New World Order kind of thing). A “Chip” or whatever, is designed for control, and the Elite/Cabal’s intent is to control the human race, that is, those who are still alive.

Back to the “Motivation” part of this theory of mine. Something has been going on for a very long time prior to this current situation that as a species, we find ourselves in. The “Lock-Step” compliance, and it happening all over the world simultaneously, is too great a coincidence to have happened based on a “Plandemic” that didn’t happen or turn out to be a much of a killer as it was intended to be. The numbers world-wide show a 99.99% recovery/survival rate and the folks that ARE dying are those with weakened/compromised immune systems like the elderly or those with underlying medical conditions.

Although their Plandemic fizzled out, it amazingly is still pushed on the masses by the various governments involved and the Main Stream Media (MSM). The numbers in my opinion are false, witness the sarcasm going around, “Hey, I know a guy whose Uncle was eaten by an Alligator (partially), and the hospital that took care of sewing his remains back together listed COVID-19 as the official cause of death”. “Yummy, yummy, Uncle Joey for the Tummy”.

If you were, let’s say, President of one of the top western nations, and you already had obtained wealth at some level, and had risen to the top of the power structure politically thereby wielding great power over your country and it’s people, and the Puppet Masters said, “Look, you either go along with this plan that has been decades in the making, and once our New World Order is firmly established, we will continue to allow you to wield great power because you will be appointed to the “Great Council of Leadership”, you know, that twenty-member council that will oversee the world for us, (and do our bidding as we dictate it to you)”……OR…..”WE WILL KILL YOU AND YOUR ENTIRE FAMILY (and make it look like an accident)”. Simple. Promise of continuing/more power, or threat of death, what would you choose?

The truly wealthy, those with billions of dollars and also those farther down the Totem Pole with hundreds of millions, are not concerned about how they continue to increase their wealth (their portfolios), they already have all the mechanisms in place to assure that their wealth continues to grow. What they want most of all is to remain in power over whatever their own little sphere of influence happens to be, and the choice between living and dying is obvious, they choose to fall into lock-step along with their peers. Money, they have already, to remain in the NEW WORLD ORDER with the same amount of power and influence and the promise of more of that power and influence is about as greedy as one can get.

Here’s a few MEMES associated with this essay: 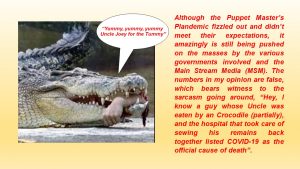 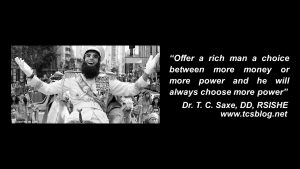 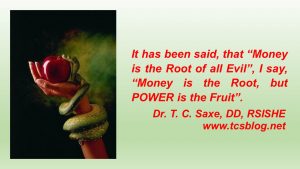 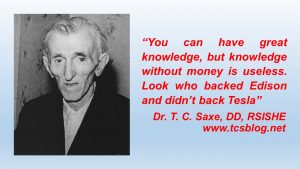 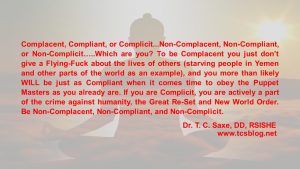 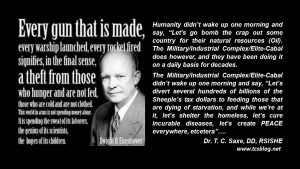 For discussion sake, imagine what percentage of the top ten billionaires, correction, top FIVE billionaires wealth could end world hunger and other atrocities that plague mankind, 2%? Perhaps 1%? And yet when these folks sit there at their annual meetings and forums discussing and planning THEIR future, is that option ever discussed? I don’t think so. Their wealth in most cases is tied to their stock portfolios which their paid professional investment advisors dutifully have invested heavily in guess what? Companies like Raytheon, Boeing, Lockheed Martin, BAE Systems, Northrop Grumman,  General Dynamics, just to name a few, i.e., the “MILITARY/INDUSTRIAL COMPLEX.

Exactly what is discussed at these annual gatherings of the most powerful people on the planet? I can just see it. One dude raises his hand and says, “HEY! I know. What if we end all wars and world hunger?, and someone else says, “STFU! The more that die the better. We need to rid ourselves of all the dispicables. My portfolio increased by 35% just this year alone!”. These people are not concerned about a few million deaths. Sure, they DO discuss humanitarian, environmental, and other issues that ARE important, but they ALSO discuss and plan what’s best for THEM, not us. They have been ramping up on this NWO and Global Reset for at least a decade now, and like a snowball rolling downhill, their overall plans have been accelerating and increasing in momentum. Back to “Chipping” every living human being on the planet. POWER! CONTROL!

Everything else, like the social injustice movements like BLM (Black Lives Matter) are inconsequential to the Elite/Cabal’s BIG picture. The Elite/Cabal could give a flying fuck about ALL the societal issues, in fact, much of it is funded in part by the extremely wealthy as part of their plans. Pretty smart on their part to have the masses at odds with each other all the time over something like, let’s say, electing a POTUS, or finding justice for some poor souls who were gunned down by inadequately trained police.

“Tell me again, who are these people called Sheeple?”

No matter what side of the fence you are on, for sure we are entering an era that will either put many of us in the so-called conspiratorial FEMA Camps for “Re-Indoctrination”, or we will be culled (killed off) by the next great pandemic, or something else. Do your own research, and by doing that, “FOLLOW THE MONEY”. Research the Army’s Biological Warfare Research Center (that was) in Fort Detrick, Maryland. Research who’s money funded the further research and development at the laboratory in Wuhan, China. Research what you will, and WAKE UP to what is going on. Then join in making real plans to survive what inevitably is coming.

And now, to conclude this essay, In offer a little humor/sarcasm:

Postscript: One last MEME created the following day that’s appropriate to this essay 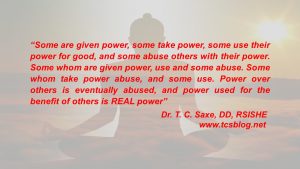