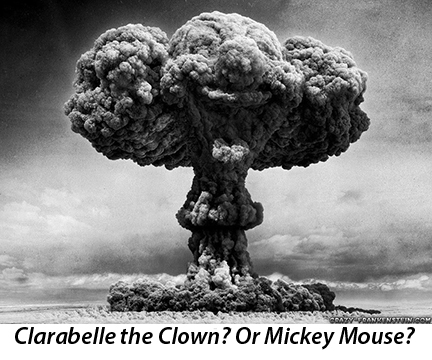 Prorogue: To all my farcecrap friends & family. I started writing three years ago this month. I’m seventy years young now, and I love writing. Many of you visit my blog on a regular basis. Maybe you like some of what I write? With 424,707 hits from 58 countries, I am pleased with the fact that my writing attracts as many people as it does.

I ask everyone to respond if you will, to my latest project. There have been plenty of “Post-Apocalyptic” stories, movies, series. I didn’t plan on writing this. It came to me suddenly last night, as an inspiration, so I started writing. I am thinking that it is different enough from all those other treatments of the same subject.

Thanks for clicking on the link, give it a read, and let me know what you think either via farcecrap or through my website. Thumbs up or thumbs down, positive or negative comments/responses will be genuinely appreciated. Thanks for your time.

Title: The END (not really)

Initially, it began with two dirty bombs. One in London and one in Washington DC. We all thought something like this was bound to happen eventually. As if they had foreknowledge of what was coming, the POTUS, with her cabinet and a handful of senators, escaped beforehand on Airforce One and Two, destination, a mountain fortress in Colorado.

After 9-11, the military actions in the Middle East had intensified year after year. Many people over time, with research and common sense, began to believe that 9-11 was a “False Flag” operation by the CIA and the Mossad to convince the citizens of the United States and most other allies to invade Iraq.

The ongoing wars against “Radical Muslim Terrorists” after that horrific day seemed to be the right thing to do in the first few years, but as we eventually found out (research & common sense), it really wasn’t about eliminating Muslim terrorism, and it wasn’t Muslim terrorists that brought down the WTC on 9-11.

Death for over a half a million in London, and a million in Washington DC and the surrounding area did not take much time. By the third day, both bombs took their toll with radiation sickness and the resulting deaths for those that decided to stay or were unable to escape.

A third of the population in both cities did escape in the first two days, leaving on planes, trains, automobiles and buses. Some folks literally walked out, hitching rides whenever they could. Eventually their escape from the deadly radiation would prove to be futile as they sought refuge in other major metropolitan areas. The smart ones chose destinations away from the major cities. Does it make sense to escape Washington DC and end up in New York City?

In the first few hours after the dirty bombs, much of the mainstream news talked about the horror, with interviews/eyewitness accounts and much speculation. POTUS eventually makes an announcement when she is safe, miles deep in that mountain fortress in Colorado. She is pointing the finger at Iran, Syria, AND Russia. Some news pundits are also speculating that North Korea was responsible. Those of us that knew the truth about 9-11 believed that it was a “Pete & Repeat”, a False Flag operation by the “Deep State” (New world Order) and the Zionist regime that held the balance of power in the area previously known as Israel/Palestine.

Three days after the dirty bombs, the combined Navy fleets of the USA, Great Britain, France, and three other allies converged in the Mediterranean, Gulf of Oman and the Red Sea. Conventional cruise missiles were launched by the allies. Planes were launched off the allied aircraft carriers and from bases in Saudi Arabia. Damascus and Tehran was literally flattened the fourth day after the dirty bombs were detonated. Many of us thought, here we go again.

Also, on the fourth day. The Russians answer back in retaliation by attacking the allied warships. In the Mediterranean Sea, a single nuclear torpedo (with stealth technology), fired from a stealth nuclear submarine, sunk two American aircraft carriers, four missile cruisers, and six destroyers. In addition, two more nuclear torpedoes, fired from Russian submarines in the Caspian Sea, and the Gulf of Oman took out twenty other ships of ours and the various allies.

What comes next is obvious. We will never know who pressed the ominous “Red Button” first. Some of us believe that it was the newly elected POTUS launching a retaliatory strike against Russia, Iran and Syria from her mountain fortress.

Within an hour, nuclear missiles were flying from West to East, East to West vaporizing most of Russia, twelve major cities in the United States, and five major cities in Europe. The entire middle east was also destroyed. The Zionists were finally wiped off the map. Something they didn’t plan on?

The world went dark electronically and otherwise on the fourth day. Televisions, radios and the internet were silenced, no more news updates, no speeches from the POTUS. It would take two years for survivors around the world to establish communication with each other via old fashioned Ham Radio sets.

I guess one could say that as a survivor of this hell on earth, I was fortunate or lucky. It wasn’t luck when I decided to move up to a mountain area in the Los Padres National Forest, sixty miles north of Los Angeles.

I was tired of the intense heat of summers in Phoenix and just felt that with moving back to the area to be closer to my adult children and my grandson, moving to an area close to them, but up where there is snow in the wintertime would be fun for my grandson especially. Did they survive? Yes, more about that part of the story later. Well, a little more now.

The initial attack, (false flag) the dirty bombs, were a definite “Get outta Dodge” event……for a third of the population. Especially for that 30% of the people living in heavily populated areas like Los Angeles, Chicago, Houston, Seattle, etceteras. Thirty percent of those folk packed a few bags, grabbed their coffee pot, and did “get outta Dodge”.

That first day, my cell phone still worked. Immediately after seeing the news on TV, (still transmitting on the West Coast), I was on the phone with my two adult children, explaining why it was necessary for them to leave within an hour if they could, and to drive up to my place here in the mountains.

They did. Plus a few of their friends and neighbors, and my ex-wife, my buddy Phil and his entire family. More about Phil later as he is one of the main characters in this novelette (eventually getting a “Best Supporting Actor” Oscar for his role in the film version). Their arrival up here, and so forth is in Chapter Three.

We saw, heard and felt four immense impacts and explosions from up here in the mountains. From our vantage point each blast was as bright as the sun, lasting for several minutes each and then diminishing to a blackness that enveloped most of the sky.

Each of these massive explosions were accompanied by many smaller explosions as things such as power stations and gas stations blowing up. The glow of these recurring explosions was eerie, lighting up a semi-dark, semi-glowing sky with hues of blue, green, red, and an orange-yellow, almost Fourth of Julyish.

It all stopped as quickly as it began. Within two hours there was nothing left but silence. Not a single bird chirping and singing, not a single sound except for the slight rustling of the leaves in the Oak trees.  We knew that much of the world had been destroyed, obliterated by mankind’s’ greed and insanity.

Fortunately, our location in the mountains is in an area where the prevailing winds usually are coming off the Pacific Ocean and blow from west to east or northwest to southeast. This means the initial plume of radiation filled smoke/clouds traveled away from our area. It wasn’t the case for people living south and east of Los Angeles, places like Phoenix as an example. Those poor folks got radiated for sure. Within a week birds began to chirp again, back from higher in the mountains I assumed.

Strength in numbers. Our little community, Lake Pinos, consists of 80% retired or unemployed, and 20% working either in Bakersfield or in the Los Angeles/San Fernando Valley areas.

This area in the mountains was unique in that most of the residents were from the movie/television/music industries. Studio musicians, writers, production crew folks like grips, electricians, camera and sound people, and a few lesser known actors/actresses. The fact that it’s an area filled with artistic types is one of the initial attractions for me. It didn’t take long to get to know my neighbors and other folks living in our quiet little community.

Most of the homes here are on large lots/acreage with room for plenty of animals such as horses and such. My next-door neighbor John, (actually two acres away), has horses, and a few llamas, a chicken coop full of chickens that wake me up at sunrise every morning……and three dogs. Almost everyone had a Pull Barn (a structure built for storing motorhomes, tractors, lawn equipment, etceteras).

Many of the residents here have weapons. Rifles, Shotguns, Pistols, and a sprinkling of AK-47’s and AR-15’s. A few, like myself were true sportsmen/hunters and preferred to give a deer or other game animal a fighting chance, preferring the old-fashioned Bow & Arrow.

I say “give them a fighting chance” because I was a lousy shot. Even after shooting three or five arrows, that nice 9-point Buck was still standing there, munching on grass (arrows don’t go “BOOM!). First shot with a deer rifle, don’t blink. That deer is gone. That was the last time I went hunting. Not the LAST TIME I was ever going to go deer hunting, just the most recent time, which was a year ago.

Here’s a little more about Phil. Along with all the suitcases, Phil has four kids, and one is married, when we were finished unloading all the suitcases, what was left were 25 rifles, 14 shotguns, boxes of pistols, and cases and cases of ammo. Oh, and two AK-47’s and five AR-15’s. All I could say while we were unloading Phil’s arsenal into my Pull Barn, over and over again, was “Holy Shit!…….Holy Shit!!……..Holy Shit!!! Phil is a “gun enthusiast” by the way. More about Phil in Chapter Three.

For those of you that have enjoyed reading my posts and pages, and would like to make a small donation in support of my writing efforts and intentions, I have now set up a PayPal account for you to contribute $1 or so, or you can send some Cannabis, homemade Venison Jerky or Reese’s Peanut Butter Cups , your donation is 100% tax deductible