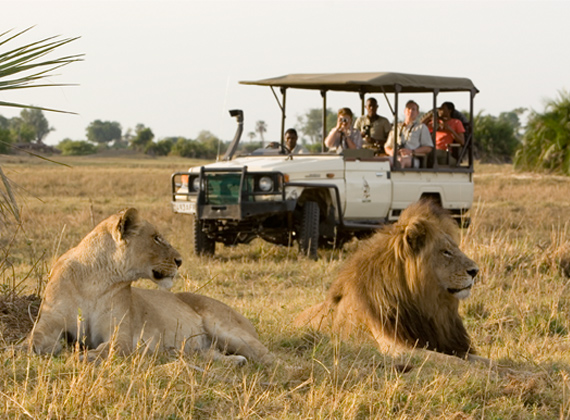 We have seen many movies where a hunter or group of hunters, go after a human being for sport. Well, this is a radically different story and plot. So different and fresh, it will get a bunch of Oscars (I hope).

A very rich dude (like a Trump, Jr. type), and his insanely beautiful, but stereotype bimbo girlfriend, are accompanied on an African safari by two other couples. A wealthy oil dude and his wife, and a yacht Captain and his girlfriend. They all originally met on the “Spix’s McCaw” a 168 foot yacht that the oil dude owned. The Trump dude was invited on a weeks cruise and partying by the oil dude, a year earlier.

Now on the safari with the Trump Junior in charge (it’s his gig), the six of them embark on the safari of a lifetime. Early in the story, while they are walking through the brush, the Trump dude lifts up his rifle and aims at what the audience sees is a male elephant. Next camera view is through the scope of the rifle, as it is trained on the Bull Elephant.

The view swings across the landscape. He fires. The audience thinks he has shot the elephant, until we see it running away. The safari guests and porters think, “Well, looks like he missed” as they begin heading off in the direction the bullet traveled.

In three minutes or so, they come upon a horribly, terrifying scene as they come upon a dead African dude. “What the fuck did you do, Donald?” the oil dude says. “I missed the elephant, got me a nigger”. Right then and there, you can see the horrified look on their faces as the Trump dude orders the porters to start digging a grave. The look of horror on all their faces is contrasted with the nonchalant look of the Trump dude. “Pretty clean shot, right behind the left ear”.

As the rest of the story unfolds it quickly becomes apparent to everyone that this Trump dude, and this trip, are Looney Tunes.

Now the safari has become a nightmare for everyone except the Trump dude. Two of the porters have run off, and the group is miles from their vehicle, which is part of the plot. All three women on the safari have varying complaints. “I thought we were supposed to safari by vehicle. Why are we walking so far?”, the yacht Captain’s wife says. “I just broke a nail”, the bimbo says. “I love a good hike”, another woman says. She keeps that cheerful, positive, yoga spirited attitude up until the moment they come upon the dead African that the Trump dude has just shot. She changes her attitude rather quickly. Another part of the action is when the yacht Captain tries to physically overpower the Trump dude. Captain Jack is shot in the gut with a pistolo. One porter left, so now the remaining “friends” of the Trump dude are ALSO digging a hole in the ground. “We can’t just leave him here, Donny”, “I KNOW THAT, that’s why we are giving him a really nice funeral service”, as he asks the captain’s wife if she still carried a little bible in her purse.

More escape attempts, one more death in the party, and the end of the story is the oil dude, who everyone thought had really escaped, and wasn’t coming back, (the audience thinks chicken-shit little bastard) because he managed to run off OK, but he left his girlfriend behind).

But, the oil dude DOES come back, after the Trump dude has killed the Captain’s wife, “Go ahead young lady, run as fast as you can, I promise if you head in that direction, you’ll find the Land Rover”. Another view through the rifle’s scope as the shot is fired, and what seems like seconds (slow motion) later, we see a closeup of the bullet exploding the back of her skull, and the slow motion drop of her body to the ground. The other two women crying, and obviously scared for THEIR lives too.

At this point, the audience really is led to believe that the Trump dude is eventually going to kill the remaining two women, his bimbo girlfriend, and the oil dudes wife.

Almost at the very end of the story, the oil dude kills the Trump dude in hand to hand combat. The Trump dude, a trained black belt, almost wins, (like an overwhelmingly one-sided MMA fight) at least the audience thinks he is literally beating the oil dude to death, when the Trump dude’s bimbo girlfriend stabs him in the back with a pretty nasty looking knife.

Last line of the film, “Well, I guess we’re never going on a safari again, are we girls”, (the oil dude survives, but he is a bloody mess).

The audience is left thinking about the possible scenarios at the end, “Did they make it back to the Land Rover?”…..Yes, probably. “Did they eventually bring the authorities back to show them the results of their ‘Safari”, maybe. Anyway, a lot to think about.