This page is dedicated to my friend Bobby, and his wonderful stories. From time to time I’ll be adding stories that I was inspired to write for him. Enjoy! Here’s the first story: 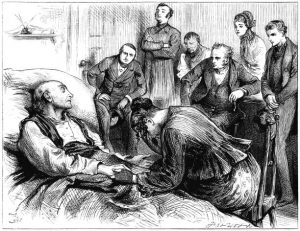 This is a story as told by my friend Bobby today, while we were getting stoned in the shade of the third fifth wheel that is going to be the guest house for visitors.

Bobby had a friend six years ago who was diagnosed with a form of cancer that was similar to Leukemia.

Bobby knew from his own experience with tincture oils, edibles and so forth with THC in them that how this regimen of using the cannabis infused various versions of tinctures gummies you know her brownies or a banana splits mobile about spaghetti sauce with a little bit of THC in it you can put THC in anything!

Now, Bobby‘s friend was told that he only had about two weeks left. Left? How about saying “Looking forward to”, as in, “Looking forward to this Cocksucker’s last breath”. As overheard by everyone within “Ear-Ing” which would be here in the kitchen with your brothers and sisters, with four of the spouses either a husband or wife, several cousins, two mistresses, a bartender and two total strangers.

In all, there were 19 people out of the 27 who were there in the mansion somewhere close enough to hear every fucking word you just said, and every single person either said, “Amen to that”, or they just said “Yes”….. Everyone agreed, that it was Dad’s time to go”. The only reason ANYONE was there is because the dude on his deathbed was worth 6.5 Billion dollars.

Not so with Bobby’s friend. John wasn’t an old man. At 56, he still potentially could live another 50 years.

John was loved by everyone. Friends and family all were heart-broken when they got the terrible news. “Devastating” one close friend said.

Back to Bobby and the THC connection. When Bobby arrived at John’s home, he was shocked when he first saw him, laying on his back, arms folded (not holding a Rose), and eyes closed. “Aw shit, I didn’t realize. I just talked to him this morning about coming to visit him.

John’s daughter says, “He’s sleeping. He sleeps a lot. Has to use a Bedpan, I.e., John is bedridden.

John woke up as soon as he heard Bobby talking to John’s oldest son Eddie and his daughter, Kimmy.

Bobby brought over $400 worth of various cannabis-infused products. Tincture Oil. A Brownie, a package of flower-shaped Gummies, and a package of hard candies.

John had begun to deteriorate quickly over the preceding month. It’s interesting that this Cancer had spread so far, in such a short period of time.

John’s two sons and the daughter gave Bobby permission to get their father stoned out of his mind.

John was no longer able to eat solid food. First Bobby cut up the Gummies into little pieces.

After a brief hesitation and Bobby’s reassuring words, the procedure/process/experiment began. “Just put this on your tongue. Let it dissolve”.

Next came the Brownie. Bobby cut the Brownie into 1/4” squares.
Turned out that John COULD chew a little and swallow that piece of Brownie.

Next? That Hard Candy. John put that between his teeth and the inside of his right check.

Due to John’s condition, Bobby did not bring any Bud or a Vape Pen, so what John was consuming was edible forms of THC products.

John lived three weeks, not two like the doctors had predicted.
When I asked Bobby what that last week was like for John, he said “John was enjoying the solid foods that he couldn’t eat anymore up until that last week. T-Bone Steak and Baked Potato the night before he died.

Here’s the punchline. John consumed that entire Brownie, the seven Gummy pieces, and the five Hard Candies, PLUS the Tincture Oil to the last drop.

In my mind I thought no big deal. All of that was probably consumed over a seven day process I assumed.
But I had to ask Bobby. “How many days was John consuming all that, all week”?

In that last week, John was walking to the bathroom on his own. No more Bedpan. Like I said earlier. John ate solid food for the last five days.

His attitude changed for the better in that instead of depression and anger knowing that he only had two more weeks to live, John was back to his old lovable self, in spite of knowing that he was at the end of his journey, John accepted the inevitable. He wasn’t moping around. If he were alive today to tell you, he was a happy dude going out stoned.

Moral of this wonderful story? Bobby helped his friend John live another week as far as John was concerned. Family and friends really appreciated it as well.

Point of the story? Two things. One, what a great thing that Bobby did for his buddy John, and two, I am optimistic that this true story will inspire a lot of people wither they’re Stoners are not, to try the various Edibles, and Tincture Oils.

And that leads into a whole other story about Bobby making a Melanoma on his hand disappear in seven weeks with the Tincture Oil. Stay tuned.