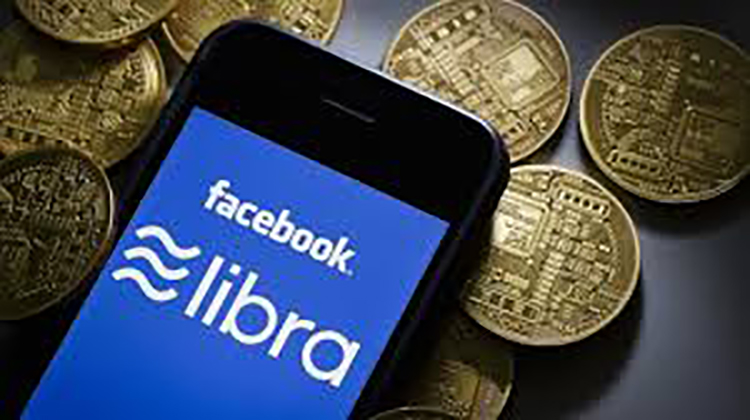 Tonight, my next-door neighbor Cameron and I were sitting out on the driveway enjoying several bong-loads and talking, as we have several other times before.

Note: Cameron is a very intelligent young man in his early thirties. His work is involved in financial areas such as investments, etcetera, and he also writes “Code” for financial applications. He knows a LOT about things like digital currency.

We talked about a lot of different subjects, and the longer we talked (smoked) the more bizarre the subject matter became (in a good way). Bizarrely innovative and inspirational. Maybe even a little prophetical? Look, I’m writing about it now.

Here’s what inspired me to write this. Cameron mentions that Facebook is going to be coming out with a new digital currency, called “LIBRA”. Think about this. With four billion (or whatever) users/accounts on Facebook, the platform is larger than any country/government, larger than any religion. Like Muslim or Catholicism.

Do you see where I’m going with this? Facebook, when they come out with LIBRA, you will be required to have a RFID “Chip” at some point, in order to “have” a Facebook account. Now, think about this, this new Digital Currency will be linked/backed by the U. S. Dollar, (not gold by the way). You could care less if you have a Facebook account? Don’t worry, the powers that are currently in place right now WILL pass Federal Laws that will mandate that everyone be “Chipped” anyway for complete control over our lives, and the Facebook account that you get for free will be included in your “Chip”, as THAT will be part of what allows you to eat and breathe, i.e., buy food at your local grocery store, get a haircut or a massage, or buy new tires for your John Deere tractor.

Because of this, and a few other reasons, the federal government will pass a law that mandates that everyone WILL be “chipped”. Those that refuse to participate in the “chipping” will be sent to one of those FEMA “locations” for “Re-Education”. Of course, it’s just part of all the “Conspiracy Theories” out there floating about on social media that speculate the Feds have been outfitting some buildings like WALMART stores?

I don’t know, but I think there may be some truth is this conspiracy theory. Which leads me to say, they are already “chipping” employees at many privately-owned companies and if you don’t take the “chip”, “There’s the fucking door dude, adios, get your shit from your cubicle and get the fuck out, you’re FIRED!”

We all have seen the wonderful Facebook posts that depict having a “chip”, (really a diode looking tube) inserted under the skin in the web flesh between your thumb and your index finger. As I continued to tell Cameron earlier tonight, about the chipping, I took it a little farther. 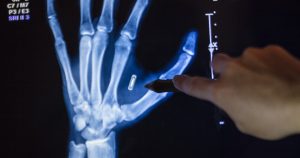 What if both your hands are missing? Simple, stick that “chip” in one of the forearms. What if both forearms are missing? Okay, stick that “chip” in his/her bicep. What if, the person had no right or left bicep to work with? I said to Cameron, “OK, so they insert that fucking chip about two inches from where your junk flops, in your right or left thigh. That’s so the perverted government employee and/or soldier that inserts that chip, gets his/her jolly’s off a little. No legs, lower and upper? No problem, they’ll stick that chip in one of your ass cheeks. You have no ass? Dude, you need to reconsider suicide”.

Anyway, bizarre topic it DID turn out to be. The federal law will mandate that all new-born will be chipped directly after birth. Where? Well, certainly not in their teeny-tiny little hands, arms, or legs that will continue to grow. That “chip” will be inserted in the baby’s right or left butt-cheek, because although that little butt will continue to grow along with the arms, legs, head, the entire body, the ass-cheek is the best area to be chipped, and more than likely have to be re-chipped every five years or so.

Which leads to the technology part and why this is a critical part of this digital currency thing of Facebook’s. Over a very short period of time, we will see the size change, to a smaller and smaller “Chip”. With today’s current technology that chip is quite small already, about a ¼ inch long tiny tube that many privately owned companies are forcing their employees into…… 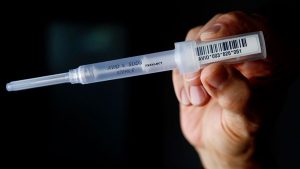 to what will be inserted via a hypodermic needle, i.e., small enough to be immersed in Saline Solution and injected in your arm, leg, or butt, depending on whether you were missing limbs or not, knowingly, and forcedly under threat of “Re-Education” at a FEMA Camp.

Now here’s where the bizarre part comes. What IF this eventual microscopic array of a digital techno-device is part of a Vaccine? Oh, let’s say like a COVID-19 Vaccine or maybe the next one, the SPASMATICA VIRUS, you know, the one that if effected, a person has multiple, uncontrollable and painful spasms throughout the day, increasing to a constant spasm that eventually kills you. SCARY!!!

At this point Cameron and I had smoked our last bong-load and said our goodnights, and I go in and start writing this bizarre post for Facebook and for my website. Bottom line? Research Facebook’s digital currency, LIBRA. Prepare? Well, I just betcha there’s a lot of militia-type folks that are already prepared. For what? They really don’t know the depth of it.

They have some related sub-issues that they are aware of and are preparing for, and they are generalities really, like a “Civil War or Major Uprising of the People”, just because our basic freedoms are slowly being taken away.

But, and it’s a BIG BUT, what needs to happen that will make the Patriots stop the tyranny,  and overthrow the powers that be, will be ORGANIZATION, like I have continually “preached” for four years now. Without organizing EVERYONE, we would be defeated, chipped, put in a FEMA facility, or eventually hunted down and shot by the so-called “Official” government/military force that we tried to evade for months.

Final thought, research Facebook’s soon to be released digital currency. Research the technology advances of the “Chip”, and watch as it decreases in size. Watch what they decide to do with this existing COVID-19 Scamdemic. Let’s see if they don’t eventually come out with a virus that does some really serious shit on your body ending up with death. Watch for…..wait for it…… the SPASMATICA VIRUS!

Want to be a part of ORGANIZING EVERYBODY? Message me. Write to me. Let me know and we can begin by talking about it on a platform like Zoom. I intend to start a YouTube (or other platform) Podcast of my own at some point centered around solutions for defeating PTSD and my thoughts on other subjects, like “What Makes a Marriage Successful or Unsuccessful”. Cameron shared that it might be too sensitive a subject matter on any YouTube podcast-type of platform for many folks. I responded, “My intent is to use the podcast more in a comedic vein, still with serious messages of hope and resolution for many problems/issues that people face”.

Comedic? How? Just imagine the podcast is featuring a retired Army Major as a guest. You met him at a wedding party after one of those military-type weddings where a bunch of dudes in their dress-whites held their swords over the happy young couple as they ran down the steps of the church.

At the party, a friend had nudged you in the arm and said, “Tom, see that Major over there? He has some serious PTSD issues, and he won’t admit it. You MIGHT be able to help him”.

Long story short, after injecting myself into the Major’s conversations at the Wedding party, we become friends, and first meet for drinks one night at a local “Titty Bar” that he had suggested.

Major Ed eventually began writing in a small note-book as I had suggested that he try. From first thinking it was a sissy thing to do, to starting a daily diary/record, to last year publishing his first novel based on his wartime experiences in both Iraq and Afghanistan. His PTSD? Gone. My first Podcast guest very well could be Major Ed or someone similar. The comedic part? How about my first question be, “Just how young WERE those girls you “Dated” over in Iraq?” His response, “Well Mr. Unknown Sock Puppet, you ought to know because you “Dated” them right after me”.

Within a minute or so, everyone watching/listening understands that my question was in jest, not serious, as it leads into the Podcast’s format of using off-the-wall comedy touches to talk about serious matters.

The point in saying all that in the previous three paragraphs? Using the Podcast to help in…….Wait for it……ORGANIZE! So, please, if this post inspires you to join me in doing this, let me know, let’s stop being like a “Single Fly, Farting in the Wind”.

Part of this essay was about my desire to help people with PTSD and other serious issues, and part of this was sharing the potential ramifications of the release and infusion of the Facebook digital currency LIBRA. Part of this also is doing a Podcast? Can a podcast as I describe lead to, or be a help to ORGANIZING? We shall see.

It’s delusional to think that my one little Podcast would ever be as popular as Joe Rogan’s, BUT (see it’s a BIG BUT)…..BUT, it very well could be the beginning of a huge multi-leveled “Joint” podcasting system of True Patriots, combining five to ten “Regional” podcasts that get together on a Zoom type of platform, i.e., a platform where multiple groups of ten or more can get together to ORGANIZE if you will. Groups like, let’s say ALL the Militias, or other types of freedom-loving groups that desire to associate with like-minded groups and organize same? Not just linking/organizing folks here in the USA, but linking like-minded people/groups all over the world. Please write to me if you are serious enough to get involved, to be a part. Thanks.