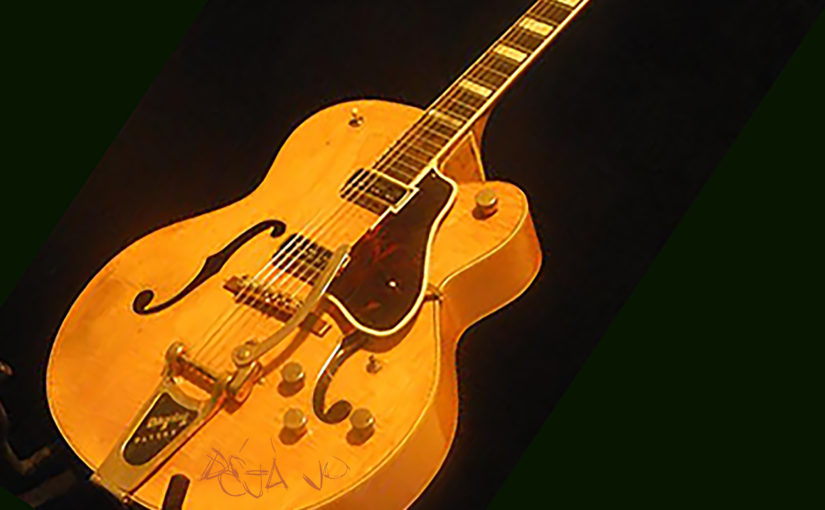 This short story begins in a pawn shop in Santa Monica, with a young man in his late 20’s, by the name of Billy Bob Bourget’, (pronounced BOUR-Jay if you were French, and just plain old BOOGER in grade school, to eventually, BOOGIE in High School, “Let’s do the Billy Bob Boogieeee!”.

It’s a Friday afternoon, and Billy has just cashed his paycheck from the car wash where he works part-time.  Two weeks earlier, someone had broken into his 67′ VW bus and stole his $25.00 Sears & Roebucks guitar that his mother had given to him for Christmas one year, along with a few other things.

Strolling down the street, Billy stops in front of a pawn shop. Checking out the guitars on display in the window, he homes in on a beat up old electric guitar with some kind of graffiti scratched in to it’s top.

“Sir, is there any history behind this Axe?”, Billy asked. The shop owner responded, “Not that I’m aware of, some little old lady brought this in about six months ago after moving here from Memphis, said it belonged to her late husband. I asked about him , thinking he may have been some known picker, and she said her husband never got too far with his guitar playing, just stayed doped up most of the time, playing in juke joints. 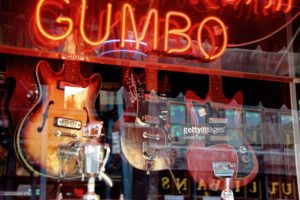 “I believe the tag on it says $175.00”, the pawn shop owner says. Not a bad deal Billy thought, really, but how much did the little old lady get? 50 bucks? Really? For a beat up 1952 Gretsch Model 6193 Country Club with an arched maple top, solid maple neck; solid rosewood fingerboard, and three strings (supposed to be six), not a bad deal for me, Billy thought.

They sealed the deal which included a cheap case for $25.00, two sets of strings (2 sets for the price of one set), such a bargain, a fairly new Pignose Amp for $50.00, and a handful of free pawn shop guitar picks with “John’s Pawn & Bail” rubber-stamped on them.

Billy had been in Los Angeles for a few months, wanting to try his luck in the music scene. Ham Lake, Minnesota was a long ways away. “Wonderful singing today Billy, your solo with the adult choir was absolutely marvelous this morning”. A nice compliment from the Pastor of his church. “Next Sunday, please do one of your songs with your acoustic guitar”, Pastor Franklin said with a polite smile.

Nice refreshing memory of home, as Billy is having an unusually mystical experience that night in his motel room in Venice while blubber-brained on Jack Daniels. Perhaps in a conversation with himself, Jesus or his guitar, or possibly just chatting with the spirit of a long deceased, unknown musician.

That night, while on his knees speaking to his “John”, in between projectile hurling, he swears to get off the booze and concentrate on his music. The following morning he wakes up with music running almost wildly through his head.

He picks up the guitar, turns on the amp, and like magic, he is able to play the amazing riffs and melodies he hears, in spite of having no real experience or technical skills other

than a handful of self-taught chords. He stops for a moment to stare at his right and left hands, which obviously are being controlled by the music running through HIS brain, playing at a skill level that scares him a little.

As he stops to examine the guitar and lay it down gently on his bed he thinks out loud, “Whatthefuckisgoingon?”. He goes to the toilet for a minute, takes a pee, looks in the mirror, and splashes water on his face. (Something’s not right in Kansas, Toto).

He walks back over to the bed, picks up the guitar, turns on the amp again, and that scene, and his music, softens and melds into many future scenes of him sitting in with bands all across the country capturing the hearts of audiences everywhere he played.

He had long ago quit the car wash job and his other job as a waiter.  Seeded from various musicians from around the country, like New Orleans, Chicago, NYC, Memphis, Austin, and Los Angeles, Billy slowly forms a band of other mostly unknowns with their own problems with drugs, drinking, or whatever.

The glue that bonds this group together, as well as the energy that propels the group to stardom, is found in the almost mystical effect that Billy and his guitar has on the group.

Billy’s 67′ VW Bus sits at his home in Santa Barbara as they travel the US in their Tour Bus. One by one, like Billy, they begin to clean up their lives from the clutches of drugs, depression, anger, PTSD, and all other sorts of demons.

“Billy Bob and the Boogie Men” become an overnight sensation, eventually progressing from small clubs and venues, to touring and playing for stadium size audiences from Los Angeles to London, from Berlin to Boston, from New York City, to Montreal. Their style was unique, similar to Stevie Ray’s Texas Blues mixed with Memphis blues, slightly Rolling Stoneish, with a little Hallelujah added in.

The real appeal to audiences was the originality of the music and lyrics, coupled with Billy’s unbelievable guitar pickin’, along with the tightest sounding band in modern history. Along the way Billy and his band are faced with the typical temptations of the lifestyle they are living, which for the most part are successfully battled and rejected as they become more and more successful.

The band, AND Billy Bob, stay clean, and stay together as a group for over thirty years. Over the years, Billy Bob begins to question if there really was any “magic” to his magical guitar as there certainly seems to be no real evidence that the band members are influenced by anything other than the “magical”, awesome musical skills that Billy Bob exhibited on a daily basis.

In fact, his awesome skill is apparent regardless of what guitar he picks up. His best is when he picks up his old Gretsch, “Déjà vu” however.  Forty years later, Billy Bob Bouget’ is playing solo at the Grammy’s as a tribute to his band and their lifetime of success.  The other four band members have died. For them, the music stopped. For their families, they left behind an awesome legacy.

At the Grammy Awards, Billy Bob, now in his early 70’s, walks onto the stage to truly heart-felt cheering and Applause. He has had an extremely successful solo career, but had not performed live for many years. His last solo album was released five years ago, going Platinum.

Tonight, to honor his band, and for his fans worldwide, he solos on his old Gretsch, playing a brand new song, backed up by a beautiful violin section.  For this particular Grammy Awards, and historically, this tribute was the best performance of his lifetime, tears, cheers, standing ovations, Billy Bob Bouget’ was being honored for his lifetime of music and lifetime of philanthropy.

There is his one tiny hitch that no one saw. Just before he goes on stage for the tribute, in a moment of weakness and fear (his voice not what it used to be), for the first time in forty-two years, Billy Bob smokes a bowl, and has a shot or two of Jack.

He’s violated the promise he had made to himself that first night forty years ago, in his seedy motel room in Venice, the promise to his guitar, and to the spirit or whatever it was, of an old, forgotten, blues guitarist from Memphis.

After his dramatic and soulful performance, while walking up to the microphone to receive his Lifetime Achievement Award Grammy, he drops dead in his tracks from a massive heart attack. The audience is stunned. For him, the music, and the story, has ended.

Years later, in a small pawn shop in East Los Angeles, a young, perhaps 13 year old Hispanic kid is looking up at a beat up old guitar hanging there with all the other guitars. “How much is the old Gretsch?” the kid asks. The pawn shop clerk says, “$175.00 and it’s yours, the case is an extra $25.00, and I’ll throw in a new set of strings”.  “Sold!”, Alberto says, as his mother is reaching into her purse for her checkbook.

The pawn shop clerk had no idea that the guitar he just sold was once owned and played by Billy Bob Bouget’, probably the most famous, and without a doubt, the greatest guitarist of any genre that ever lived. If they only knew what it was, this 1953 Gretsch probably worth tens of thousands of dollars at auction, sold for $175.00 to a skinny, nerdy wanna-be rockstar teenager. Of course one might guess that the ending of this story, is perhaps just the beginning of another, never-ending story.

The last scene we see as an audience is the young nerdy teenager sitting in his bedroom with posters  on the walls of…….wait for it…….Billy Bob Bourget’ and the Boogie Men , along with a poster of Stevie Ray Vaughan of course.

Alberto begins to strum a few sloppy chords on the old guitar, with the light from the sunset shining through his bedroom window, highlighting the phrase Déjà vu, crudely scratched in the wood on the front face of the guitar. He begins to softly sing a few lines of a song he has been writing,

“All over again, let’s do this just one more time…..Let’s finish the course, we were such a great team, we will be such a force….All…… over…..again…..Together again….All over again……Take the journey with me”, and you will see, what was meant to be”….All over again….