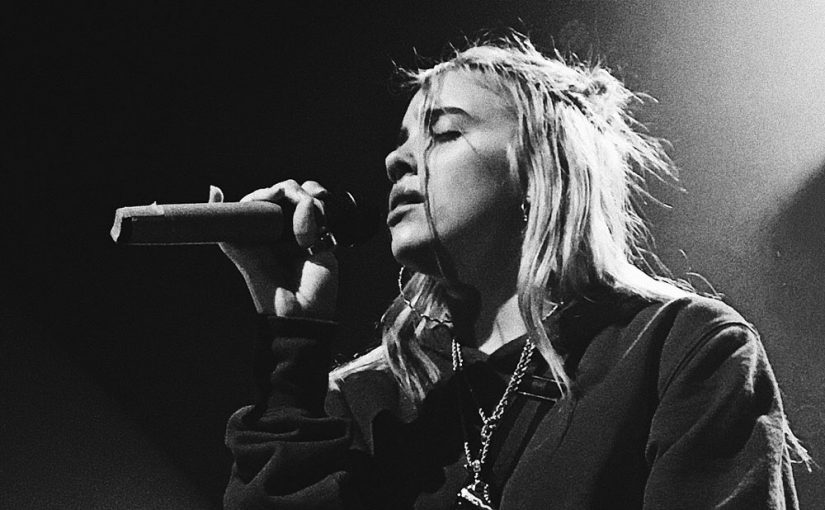 Every decade or two (or three), a talent comes along that just blows you away, this is one of those rare times. You have to be deaf or dumb, or “Deaf and Dumb (stupid)” not to recognize the absolutely incredible talent of this young woman. When I say young, as of this page today February 21st, 2020, she’s only 18 years-young folks. I would normally say that she’s going to be a “Superstar” some day, in my book friends, she already IS a “Superstar”! I admit, tears of JOY and AMAZEMENT I get from watching and listening to her perform!

Watch the Glastonbury Concert footage from June 2019. Her seemingly natural stage presence is amazing. It’s just her and her brother Finneas O’Connell, and a drummer on stage. I love how the fans/concert goers sing along with her on many of her songs.

Did I mention yet that she scored big at the Grammys this year? Five in total. Billie Eilish swept the board at the 2020 Grammys, winning five awards, including best new artist and song of the year. The 18-year-old also won album of the year for her debut, “When We All Fall Asleep, Where Do We Go”, which was recorded in her childhood home in LA. Her elder brother, Finneas O’Connell, also picked up producer of the year for his work on Eilish’s album.

Did I mention yet that she has the distinction of (listen/watch the link below):

“No Time To Die” by Billie Eilish has become only the second-ever James Bond theme song to reach the top of the UK singles chart. Sam Smith had the only other 007 chart success, when “Writing’s On The Wall” from Spectre went top in 2015.

Her rising stardom didn’t happen overnight. Billie and Finneas began about three years ago or so, putting songs up on YouTube, which many of their postings there are now in the multiple-millions of views.

Kids who read this. It’s not just a pretty face and a nice voice. Some folks (critics with their heads up their arses), sometimes attack her for her soft voice. I say, that’s what makes her who she is, and personally, I love her voice. What made the difference between her and every other hopeful that has talent. is her song writing skills, which has been a collaborative effort with her brother. SONG WRITING, not just okay song writing, but the amazing song writing skills of her and her bro Finneas. So, if you dream of someday filling stadiums and entertaining like Billie, and you have a voice, WRITE YOUR OWN SONGS!

Also, I might add, Billie and Finneas have done this over a period of several years while still living at home with their parents. Another important distinction is the fact that they both were home-schooled, and raised in an artsy-fartsy home, kudos to their parents. Billie is an inspiration for sure, especially for all the youngsters that desire to follow in her footsteps!

I have added this “Page” to my website in order to make it easier to find all the various songs, and concerts that are currently available on the Internet. So, enjoy

Billie Eilish – No Time To Die (Live From The BRIT Awards, London)

No Time To Die (Live From The BRIT Awards, London)

Thanks for visiting this page. Come back often.