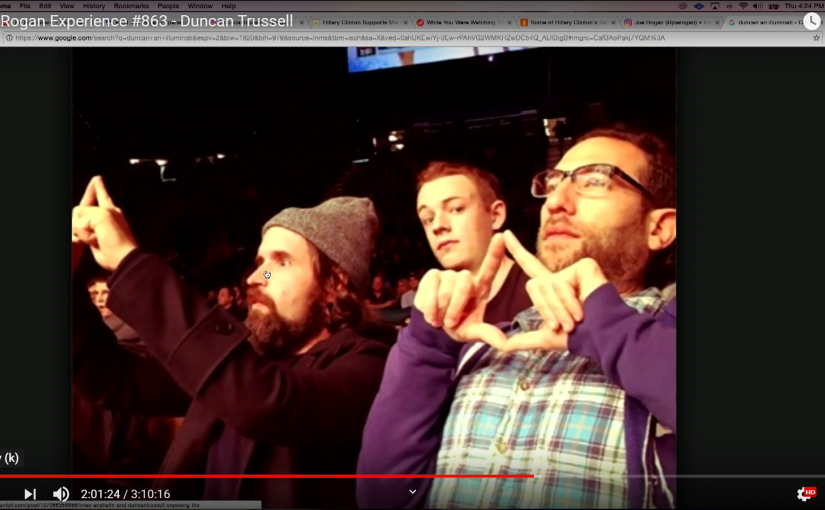 Here’s another great Joe Rogan and Duncan Trussell conversation to watch/share. This one is funny in that it was eleven weeks before the Clinton/Trump fiasco (election). Trussell especially was so convinced that Killary was going to be elected POTUS, hahahahahaha, we all know how THAT turned out.

One of the best moments in this show was when Joe ranted about Cannabis as if he were under some sort of spell (he was stoned). It’s hilarious, but so right on. See that at: One hour, thirty-seven minutes and twenty-eight seconds into the show. Enjoy.

P. S. I had to laugh several times during the show because the same thing was happening, I was stopping every now and then to create a Meme or two, or three, and to write this review. There was one part of the “Political” discussion that made me chuckle because what they were saying during that last election cycle, still holds true today. Try to find the point in the show that made me feel that way, hahahahaha. Yes, it turned out to be another all-nighter. It’s 4:49 AM Monday morning the 16th of March, and I am two hours eight minutes and six seconds into this three hour, ten minute and sixteen second show. So far, it’s taken me seven hours, twenty-eight minutes and twelve seconds to watch this show, hahahahahaha.

P. S. S. Here’s an afterthought. John Barbour would love to do it (and he HAS reached out to Joe a few times, with no response), if Joe Rogan would have him on his podcast, this is ONE podcast that I would pay money to attend. Shit, Joe and John could fill a small sound stage with 100 people in the audience. It would be awesome if they could create the same set or similar in feel as he has on his normal podcast in his “Studio/Man Cave”.

I think Joe needs to set up a separate “Channel” on his YouTube main channel page devoted to Duncan Trussell because for me so far, watching and listening to those two have been THE most entertaining and inspirational shows that Joe has ever done. I spent quite a bit of time searching his main channel for the follow-up to this particular video, #863 originally streamed live on Oct 20, 2016 as I wanted to see both of their reactions and subsequent conversation about the fact that Killary got her ass kicked by Trump in the POTUS election some weeks after this show. I could not find any follow-up, which is too bad.

Here’s the link to the show:

P. S. S. S. I’m only one hour, fifty-nine minutes, and thirty seconds into the three hour, ten minute and sixteen second show and I am still watching it as I write this, plus I have created a few Memes along the way. Thanks for the wonderful entertainment and inspiration, dudes. I loved the part where they were jesting about the Illuminati and Free Masons. As I have said before in another post/review. I swear, I would love to have coffee with these two dudes some day. They are so comfortable in their “Stoniness” conversation, it make’s me feel like I’m right there in the studio with them, participating in the conversation. Maybe it’s because I am stoned as well?

P. S. S. S. S. S. I love the fact that Duncan did not hesitate to hand the joint back to Joe as opposed to that dude Adam Curry in Episode #1436 who did NOT. Read that review at: https://tcsblog.net/2020/03/hey-asshole-why-dont-you-pass-that-fucking-joint-you-fucking-bogart/

P. S. S. S. S. S. S. Joe and Duncan SHOULD do a “Burning Man” Documentary, and take along an 82-year-old Grandmother that smoke pot, hahahaha. Check out the “Temple of Juno”, “Hose me down while I dance naked”. “Expressing Gratitude” (this one choked me up a little) When you walk away from the coffee shop table and the waitress has tears of joy and gratitude because you just left her a $80 “Tip” on a $20 lunch-tab (a “C” note). That right there folks, exposes the true heart of a person (in this case, Joe Rogan). Similar for Duncan Trussell, with his wonderful little story about “Penny-Arcade Game Tickets”, and what he did with his. Both dudes have great hearts.

Here’s a special comment in response to what Duncan said about PTSD beginning at Two-Hours, forty-four Minutes and Thirty-Eight Seconds into the podcast: I KNOW THAT CANNABIS CURED MY PTSD! ASK ME ABOUT WARTIME AND CHILDHOOD PTSD, WITH THE EXPERIENCED “VIOLENCE IN THE HOME” FROM THE AGE OF THREE, TO FIFTEEN WHEN MY STEP-FATHER FINALLY BEAT MY MOTHER TO DEATH. ALONG WITH THE USE OF CANNABIS, I EXPERIENCED A PERMANENT, TRUE. “MIRACULOUS” FORGIVENESS FOR MY STEP-FATHER. ASK ME ABOUT THAT SOMETIME. THOSE TWO THINGS CURED MY PTSD FOLKS!!!!! (Cannabis Versus, or together with? 3,4-Methyl​enedioxy​methamphetamine, commonly known as “Ecstasy or Molly”) under going clinical trials by the Multidisciplinary Association for Psychedelic Studies (MAPS) Founded in 1986, a 501(c)(3) non-profit research and educational organization that develops medical, legal, and cultural contexts for people to benefit from the careful uses of psychedelics and marijuana.  I’ve never taken it, so I really can’t comment on it, but as was stated during their discussion, that drug is currently at Stage-Three of clinical trials which is an amazing thing in itself! Cannabis by itself worked for me, so that’s all I can really speak to. Donate to the Stage-Three part of their research at: https://maps.org/research/mdma

Also, go to the “Burning Man” website and discover what it’s all about, and PLEASE donate. It’s a really good cause. I’ve never been to one, but this year I plan to go. Duncan covered it well on this podcast, with Joe’s “Computer Guy/Assistant” bringing up data and images” that will “BLOW YOU AWAY”, like the dust storms that the folks enjoy every year. Click” on this “Link”: https://burningman.org/

I’m tired of using multiple P. S.’s  and you’re probably tired of seeing them, but that’s how I write a review, so here’s a NOTE:

It’s 4:27 PM Monday afternoon, the 16th of March, and I am twelve hours ten minutes and two seconds into this three hour, ten minute and sixteen second show.  hahahahahaha. I THINK I’m finished so I can go to bed now.

P. S. “7”: Well, not quite yet. I HAVE to mention Joe’s hilarious tongue-in-cheek spiel about “Donations” towards the end of the show, it was great! My last two words, I promise, “Clinking Glasses”.