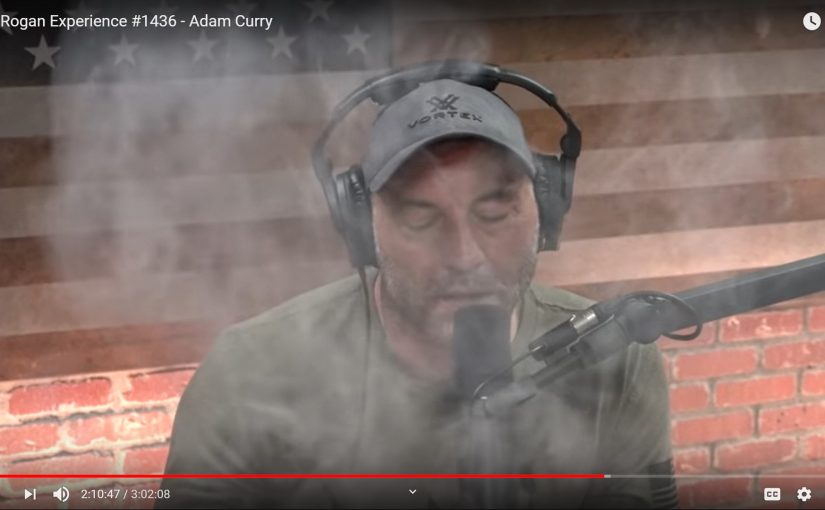 Tourette (too-RET) syndrome is a disorder that involves repetitive movements or unwanted sounds (tics) that can’t be easily controlled. For instance, you might repeatedly blink your eyes, shrug your shoulders or blurt out unusual sounds or offensive words.

I could really tell at what point in the podcast, that Adam Curry’s general persona, facial expressions, etcetera, began to change, AFTER they both had partaken of the ganja.  Good thing, the change that I saw. First, Adam seemed much more relaxed or at ease than he was in the first hour, perhaps because this was his first appearance on the JOE ROGAN EXPERIENCE, so he may have been a little nervous, (“Oh my GOD! I’m on the fucking Joe fucking Rogan podcast!!!!”), and that may have contributed to the facial tics, however slight they were, but still so strong compared to the change later in the podcast when the tics have, for the most part, disappeared, (which I will describe in a bit.

In the beginning of the podcast, Joe was not nervous, but apprehensive because he was face-to-face with “The Pod-Father himself!” (the dude that had the internet’s very first podcast). Then as the discussion went on, Joe loosened up and was back to his normal self. It was funny to watch HIM change after a little ganja.

Now, secondly, Adam’s facial tics, even as slight as they were, (or at least how I perceived them, cause I am stoned right now). So, you can see right before your very eyes, the positive/therapeutic/medicinal effect that Cannabis has on our bodies. Adam’s facial tics had almost disappeared entirely (or that’s just my perception because I AM stoned right now). I vote for the changes in Adam’s persona were due to the fact that he had, by that point, smoked two joints and had a few puffs on that blunt. Great podcast by the way.

Funniest part was at two hours, ten minutes and forty-seven seconds in, a “Scene” that I have titled, “Fuck, it’s smoky in here all of a sudden!”. The fun part is seeing the slight change in Joe’s persona, as I could see him go from slightly aggravated, to aggravated, to pissed off just a little, from that HUGE puff of smoke from that blunt blown in his face by Adam Curry was similar to that famous clip of Willy Nelson in his bus, being questioned by that talk-show dude (Jimmy Kimmel), where at the end, Willy just lets out 7 and a half lungs worth of, full of, smoke, hahahaha. Joe, I don’t blame you at all, any normal human being would have reacted in that manner. Oh, and Adam? Not a very cool thing to do, on purpose, straight into Joe’s face! Now, that was fucking stupid, and a good indication that you are reacting to a strain that has turned you into a prick. I’m sure that you are a nice dude on other strains. Maybe you should ask your new wife what strains are safe for you, i.e., what strains DON’T turn you into a PRICK when she’s around, she would know, right? I would recommend staying away from that strain that you have been smoking there on Joe’s show as much as humanly possible.

Here’s another funny micro-second at two hours, thirty-six minutes and seventeen seconds in, I could read Joe’s mind as he was thinking,“Hey ASSHOLE, why don’t you pass that fucking joint, you fucking Bogart”!  The double-take on Joe’s part nails it.