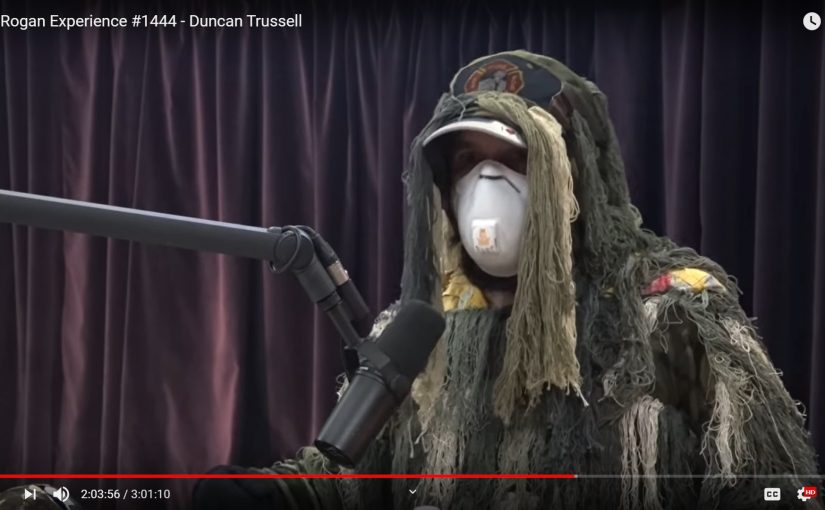 Sometimes, as many of you are aware having read my previous “Reviews” of movies and recently, several of Joe’s podcasts, that I ALWAYS take forever to watch a movie or in this case, an episode of a Joe Rogan podcast. I only write my “Movie Reviews” when they are really good movies, and the same with Joe’s podcasts in that I have only written reviews when Joe has had Duncan Trussell on the show. As I have said before, Duncan is a fucking genius as far as I’m concerned, and Joe? I’ve always felt that Joe was exceptionally bright and expressed a lot of common-sense as well (89% of the time anyway).

Well, this episode wins the Big Fat Cigar, because so far, it has taken me four days to watch and write my review for this episode. I lost count, but I think it’s six Memes that I created while “Reviewing” this particular episode, which is a ton of fun for me. Duncan wins the award for greatest outfit EVER worn on a video podcast. He actually only slipped the mask down a few times to re-light his blunt. Both he and Joe WERE stoned for this epic episode., Hahahahahaha! LOVE IT!

Okay, so Joe and Duncan are talking about when Duncan happened to be in the parking garage of his Gym early one morning before the Gym opened, (I’m guessing around five AM). Duncan is in the passenger seat of his car, high as fuck, just sitting there, eyes closed, trying to meditate, when he suddenly opens his eyes, looking to his right, he notices two creepy looking dudes, creeping up to his car. He jumps over to the driver’s side, starts the car, and speeds out of the Parking Garage.  Joe says something about the two dudes being Meth-Heads, “You know, dudes that like to break into people’s cars at 4 in the morning”, and Duncan responds using the terminology, “People trying to improve their lives”. At first, I thought he was referring to the Meth-Heads, because I originally missed the first part of his sentence. “At 4 AM. You get two types of people. The Meth-Heads, and people trying to improve their lives” (referring to those that work out). HUGE difference in the original perception between what I THOUGHT Duncan said, and what he REALLY said. Hahahahahaha.

Funny part is, here Joe is a buff, “dedicated-to-his-body-so-he-works-out” kind of dude, and it turns out that Duncan never really works out when he goes to the gym, he sits on the couch and writes. Famous quote, “How many people have collapsed at the gym listening to David Goggins”. Love it!

You are going to want to google the name, Damien Echols. And “Ceremonial Magic”, and “Hermetic Order of the Golden Dawn”.

Note to my son Tommy: Watch especially starting at one hour, fifty-nine minutes and thirty-six seconds into this podcast, you will love it!

“Apocalyptic Rogan Elk”, hahahaha! Love it! But seriously folks, Joe goes on to describe what I feel, is a TRUE “Hunter”, shooting game, in this case an Elk, with a Bow & Arrow. I have a few cousins that are TRUE “Hunters” in that sense of the word (a shout out to my cousins Barry and his daughter Samantha).

CWD – Chronic Wasting Disease God help us if they ever develop THIS as a humanly transmitted virus. Google it yourself to discover what it does to animals like deer, then go to the following link for additional information regarding the potential for humans to get infected.

HEY! I’m not a “Mad Virologist” working in some government-sponsored university laboratory, but how about a “Lab-Developed” Rabies virus, that’s spread like the Common Cold or Flu? It’s 99% fatal. 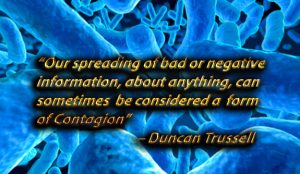 “Our spreading of bad or negative information, about anything, can sometimes be considered a form of Contagion” – Duncan Trussell 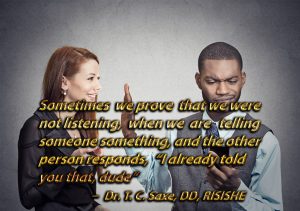 Sometimes we prove that we were not listening, when we are telling someone something, and the other person responds, “I already told you that, dude” – Dr. T. C. Saxe, DD, RSISHE 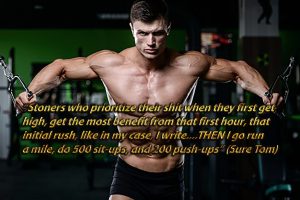 “Stoners who prioritize their shit when they first get high get the most benefit, from that first hour, like in my case, I write, then I go run a mile, do 500 sit-ups, and 200 push-ups”  (Sure Tom).

Your random thoughts, your “Ideas”, are using you” — Joe Rogan 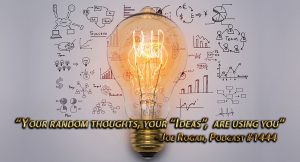 What I think Joe was saying here, (the quote that I created the Meme for), makes sense in that sometimes we DO feel like, “Holy Shit! Where the fuck did THAT idea come from”?  As if our bodies, our brains, were just “Vessels” that our thoughts and ideas inhabited, appearing sometimes from out of nowhere, releasing themselves from our brains to our amazement and wonder.

Some might say they received their “Inspiration” from their “God” whomever that may be, some might say that the many profound ideas and inventions down thru the ages, like in Tesla’s case, may have manifested itself from another dimension, or was transmitted telepathically by an “Alien”. It would have been interesting to be the dude that invented the wheel, Atom Bomb, not so much. 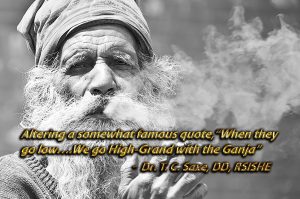 My final thought. It is amazing that either BOTH of them are totally “Uninformed, Misinformed” “Beholden to the Elite/Cabal”, so therefore they are NOT allowed to discuss the various “Conspiracy Theories”, or they’re just plain “Idiots”, which they’re not. I have already established MANY times, that both of them are highly-intelligent dudes. Maybe they are fully aware of the possibility that the Corona-19 Virus is potentially “Man-Made”, and all the other theories, but they just don’t want to deal with controversies, and thousands of “Fans” responding to them on their various Social Media platforms that they are on.

As far as the entertainment value, definitely Five Stars out of Five. I really do enjoy every single time these two dudes get together and talk, and as I have said before, I feel like I’m literally injected into their conversation, as if I was sitting right there, along side Duncan. THAT’s how great their conversations are, and the many, many laughs I get from watching/listening makes me feel good, and that’s a very healthy feeling to have, yes?