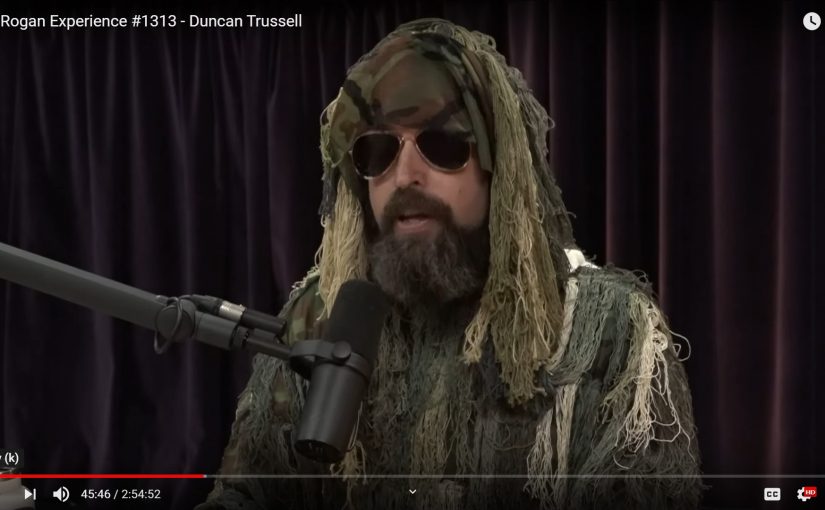 I purposely searched Joe’s channel tonight for another episode with Duncan because I so enjoyed the last one that I watched the other night, I absolutely am captured when these two dudes get together and talk. Night before last, I watched/listened to Episode #828, and it took me ten hours to watch it because I was constantly being inspired by you two dudes, stopping many times to create Memes (about five of them, one at a time), based on something you said, the topic, or just the fact that I was stoned at the time.

You two dudes are incredibly intelligent, the level of intelligence that is so out there, that “Common Sense” is a no-brainer, i.e., it has become a part of your persona by some miraculous means. This is extremely rare condition to have. It is almost magical. Just the reverse is how most people struggle with obtaining a level of consciousness that allows “Common Sense” to rise, as it begins to manifest itself via the Pineal Gland, the “Third Eye”.

I tend to think that you either possess “Common Sense” as a rare gift that many people tend to never have in their entire existence/life, or you don’t have it. They don’t teach “Common Sense” in any school that I’m aware of., i.e., no “Course” or curriculum titled, COMMON SENSE 101. Obviously, there is no “Middle-Ground”. Oh, and Duncan? I loved your Sniper Outfit knowing that you are a Peacenik, philosophical kind of dude, and Joe likes to kill stuff (animals, and I have no issues with that Joe).

I have known extremely well-educated folks (some relatives I might add), that in their cases, their “Education”, (some with Doctorate Degrees), did not make a difference in their lives. They didn’t have an ounce of “Common Sense” in their bodies, ever. In other words, their “Education” was “Useless, as Wings on a Penis”. I also have known folks with 8th Grade educations that were the epitome of “Common Sense.

Beginning at forty-six minutes and twenty-nine seconds into the podcast #1313, Joe says, “That makes actual sense, sounds like crazy voodoo hippie talk, but it actually makes sense”….I laughed so hard, I had to stop the video and ponder a moment….I actual believe that this time, Joe actually comprehended what Duncan was saying at that moment, whereas at 45 minutes and 5 seconds into Episode #828, he had said, “That totally makes sense, that totally makes sense”. I broke out laughing as soon as Joe opened his mouth and said what he said because I truly believe that Joe did not have a fucking clue at that moment.

Here’s another great Joe Rogan/Duncan Trussell moment. Actually, one of my favorite lines in the program, is at one hour, zero minutes and fifty-four seconds into the show, when Joe says, “We’re very high right now, Ladies and Gentlemen”. I laughed.

I can’t believe that now, after listening to this podcast for twelve hours or so, I am only one hour 5 minutes and 25 seconds into a 3 hour 43 minute and 47 second podcast, unfuckingbelievable! Well, I did create more shit from it like I did with Episode # 828! Hahahahahahaha, and finally posted the link to the podcast.

Here’s a few extra thoughts from tonight. Picture this. The Sloth is what I call the CentMenGenXBoom generations, or how about calling it, “Generation Alpha-Omega” (made up mostly of the “Gen Z” along with many from the four older generations). The Eagle represents the Elite/Cabal and all their fucking puppets like Killary Klinton.

Sloths are normally the Eagle’s prey, but now the “Eagle” needs to do a little praying because the “Sloths” are beginning to fight back, and there will be no mercy once the Sloth picks up a little speed. Click on this “Link” for the Sloth action that Joe and Duncan.

Here’s the “Falcons and Pigeons” video, but it’s only the trailer:

The following part of my essay originally was going to be a stand-alone essay. It was my very first thoughts as I first began to watch it, and now it’s included, but at the end instead of the beginning. Thanks to Joe, Duncan, and my special strain, “Ensenada Smoothie” and as you can see from what you previously read, I have really enjoyed watching Episode #1313.

I think where we are at as a species right now can be compared to what happens to a huge Pack of Wolves when you put them on an island full of Moose because there are too many Moose on the island, which is endangering the Moose population’s happiness overall, so here comes the wolves to reduce the Moose population.

Because the wolves start in-breeding to a point where the wolves are being altered over many generations of in-breeding, causing some pretty negative and undesirable changes. How fucked is that? We don’t care, I wonder if the poor wolves do.

So, as a species, I’m not saying we are all a manifestation of in-breeding, but we sure have evolved in some pretty negative and undesirable ways. Sure, we always have killed one another, and there IS a small percentage of us that loves torturing another human being, etcetera.

The ugliness of that side of human life has ALWAYS been there, the difference now is that for the past fifty years more or less, our world has become a much more sophisticated world in that although we still kill each other like we have been doing for thousands of years,  we just have much better weapons.

Along with that, the growth-rate of technology is such that there are still a few people alive today that have literally gone from horse and buggy to the new 2020 Chevrolet Mid-Engine Corvette, which I am going to order soon, Tan leather, Red Corvette. My point is that with the exponential growth of technology, we now have the dissemination of information that is so incredibly quick, and so encompassing, we (some of us) now have the tools to do something.

Our ancestors had the same thoughts, and similar, yet different issues, they were just not as equipped as our species is today.  A percentage of our world population has become “AWAKENED”, and done so with tools at our disposal. Those of us that have always seen the ugliness and have taken steps to make a positive change, to try and negate the ugliness instead of wallowing in it, is as different from the “Pack” as anything could be.

The poor wolves that have killed off more Moose on that island then you had calculated or planned, they are ALL fucked up, and there is nothing either you OR the wolves can do about it. On the other hand, as a species, we can now reverse the negative aspects of OUR evolution by replacing the really ugly, nasty shit with positive things. Things like LOVE, MERCY, CHARITY, PEACE, EMPATHY, SYMPATHY, FORGIVENESS, etcetera, etcetera, etcetera.

But Doctor Saxe, how do we get from “Point A” to “Point B”? There is a way, but even if what I believe to be the way, and how we should use those “Tools” is absolutely on target, everything I say or write is just another “Single Fly, Farting in the Wind” and “Useless as Wings on a Penis”.

Thanks for reading this. I think I have a rather unique way of writing a review, wither it be a full-length feature film, or a podcast like Joe’s. If you “Like” what you have read and seen, please feel free to “Share” it on farcecrap when you see it, or just “Click” on the farcecrap button that can be found below. Thanks.

P. S.  I would LOVE to have coffee or share a bong-load with both of these dudes, together some day. I brew a great pot of French Press Coffee, and my “Ensenada Smoothie” is “Dank”.