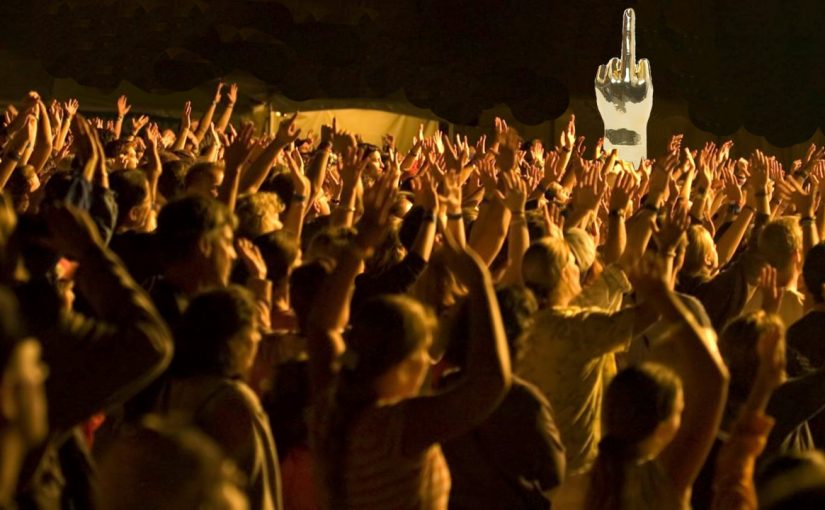 I want to nip something in the bud, make it absolutely clear, as an Atheist, I REALLY don’t care! When I say that to a religious person that has been offended by one of my posts, offended to the point of anger, that person’s rudeness and anger in response proves my point.

If you ask me the simple question, “What DO you believe in?”, my answer is just as simple, “Nothing…..Other than the Golden Rule”, which principles, i.e., fundamental truth, far too many religious folks fall far short of, and even ignore.

As an Atheist, I still feel love, compassion, and empathy for all people regardless of their beliefs that surely differ from mine. I still believe in “Freedom of Religion”, and do not oppose any religiosity, whatever floats their boat (or Ark).

However, I do appreciate the same freedom NOT to believe in anything. So, if you are moved by some emotional or mental health issues to respond in a rude and angry way, like one dude did today, all I can say in response is, “I don’t care”. 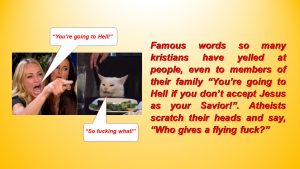 I DO care for that individual and feel a natural compassion and empathy for him, I just don’t give a flying fuck about his rude and accusatory comments, or his opposition to my posts, and I certainly have no inclination born out of emotional distress or anger to prove ANYTHING. If a religious person were to tell me I’m going to hell unless I accept their “God”, guess what? Since I do not believe there IS a “Heaven” or a “Hell”, I DON’T CARE! And, that’s the end of the discussion.

Here’s a portion of the dude’s comments “Italicised” My responses are in “BOLD” type:

that’s why he is here being a preacher, a terrible one, but a preacher no less.

His sermons are weak and intend to divide.

In his header he says he is optimistic.

My response? Preacher? I don’t claim to be a “Preacher”, I’m just sharing my thoughts and what I believe, which I have a right to do, that’s all. Sermon? Thanks for the compliment, I have never considered my writing to be “Sermonistic” in nature. Intended to divide? What a joke. The world’s “Religions” have divided mankind for at least the 2,300 years or so, of the Age of Pisces. History shows us that over the past 2,300 years or so,  “Religions” have divided, and killed more of our species than any one other phenomenon or activity. Optimist? YES! I AM an optimist!

“He don’t care”, then why is he here doing what he does?

He only cares that people drift away from the truth the way and the life.

He has no concerns for where information comes from/ originated.

And if he wasn’t here misleading the herd so careful, he could actually learn something.

He could learn how to correlate the messages, but that is not his aim.

His goal is to create divisions and bash the billions of people standing in the streets against the dirty politicians. What a foolish thing to say, to say that I’m “Bashing” billions of people…..”Dirty Politicians”, They ALL are guilty. I guess you would have to label me as an “Anarchist” of sorts, although I have my own definition of that word. In the USA, the two major political parties are two wings of the same bird, in this case a Vulture, owned and manipulated by the elite/cabal and bankers/zionists, and the military-industrial complex. Eisenhower DID warn us. Our guberment here in the USA starting going to hell in a hand-basket back in the 1950’s and certainly escalated the shit-show when they murdered JFK. So, don’t even think of engaging in a conversation with me about “Politics”, you will lose.

Discredit billions of good people, because he can’t put two and two together.

So lost in his own thoughts and conclusions, that only his version should be listened to.

Because his goal is to divide the people, I haven’t unfriended him. This statement is so ridiculous, it defies all logic. 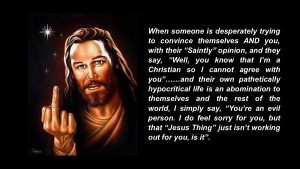 I hope many others can see through his bullshit.

It’s why he is so busy with all these other groups posting this crap and has no time to respond to the people interacting with him here.

He don’t know why cows shit patties and horses shit clumps when they both eat the same thing, yet he feels qualified to speak about God, when he doesn’t know about shit.

I hope to inspire many more to make a stand against crap like this. Good luck with that!

If he don’t care, this won’t offend him. I’m not in the least bit offended.

He won’t mind this opposing view. I DON’T CARE, so I don’t mind!

He won’t mind me persuading people to view this absurdity. Good luck with that.

“He don’t care”; God is much harsher on preachers and I would imagine not many listen to his preaching and that why he has to push it so far and wide. 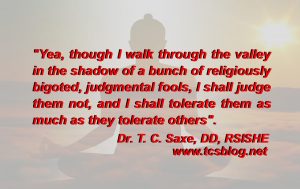 Hope he sees some signs of this soon, as long as he is here misguiding the herd. I’ll be here making sense to the herd of his mistakes. HIS HERD? Of what? Sheeple? Hahahahaha.

I’d guess he won’t like that and would assume his opposition would be silenced.

We shall see if he allows me to stay here and argue against his thoughts and assumptions (in this post he made). Of course you can stay, I’m enjoying your rude comments believe it or not, as they have inspired me to write this “Nip it in the Bud” article, which I hope you read. 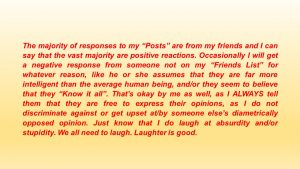 My final response to all the preceding? I love being inspired. As far as the person who inspired my “Nip It In The Bud” essay, and anyone else that gets their panties in an uproar over my writing, chill, take a pill, smoke a joint, whatever…….You are NOT going to win any debates with me because I JUST DON’T CARE!  WHATEVER FLOATS YOUR BOAT (OR ARK).