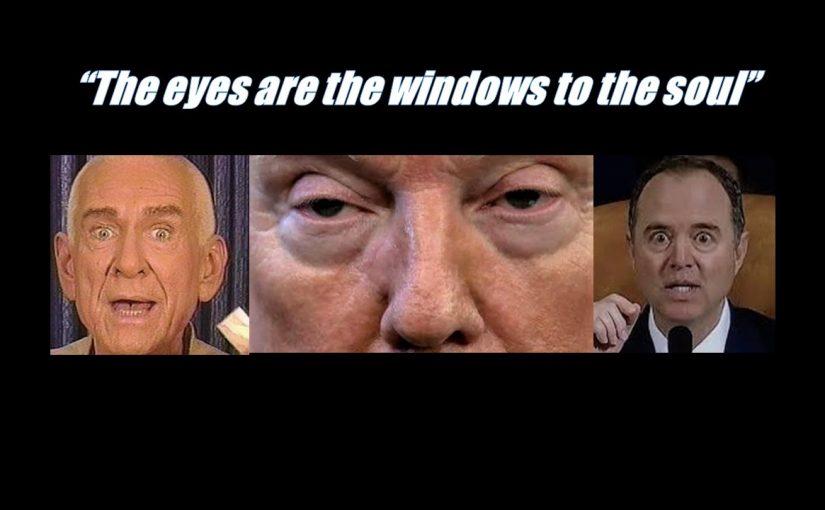 Here’s an old but true cliche. “Our eyes are the windows to our Soul”. Clearly, this is when another human looks into our eyes, really looks, and if they REALLY look, they can observe who we REALLY are as a person. If we are kind and compassionate towards others and everything else on our planet, we will see it in that other person’s eyes. So, when another person really looks into our eyes and they “See”, recognize goodness, they feel comfortable, not fear, or anger, or some other negative emotion.

Likewise, if we look into the eyes of an “Evil (bad)” person, most of the time, most people will say to themselves, “This is ONE evil motherfucker”. Then there are the eyes, that with just glance at them, those eyes tell you that the crazy-eyed dude talking to you is 100% genuinely fucking nuts.

Yes, the “Eyes ARE the Windows to the Soul. Tonight I had one of my continuations of thought with the help of a little bit of Cannabis. In the reverse, our eyes are ALSO like a “Camera/Recorder” witnessing the “The Good, the Bad/Evil, and the Downright Fucking Crazy” of this world we are living in.

In other words, instead of someone gazing into OUR eyes and REALLY seeing OUR inner “Soul/Spirit, our outward gaze with our “Eyes” are the “Camera of the Soul”…..and how we respond to the images our “Camera” sees, ALSO tells others around us what are inner spirit is all about.

What pics are you taking with your “Soul’s Camera?” Do you see suffering and feel compassion or some other positive reaction? Like when we “SEE” the people, mostly children dying every day from starvation in Yemen and other places around the world, most people DO feel the compassion, empathy, concern, etcetera. That’s because, and it’s just my own belief, that people are born good, not born evil. Evil is not something that’s part of the package when we are born.

I believe that “Evil” is a learned attribute and in many cases, are in the certifiably “Crazy” category along with being “Evil/Bad”, in other words, mentally, not normal, “Crazier than a dog in a hubcap factory”. I know I MAY get some flak for that belief. The religious types would not agree with me on this because they are still clinging to the bullshit idea that we were “born sinful”.

Then there are the “Nuttier than a port­a ­potty at a peanut festival” people, like my step-father. About seventeen years or so after he had beat my mother to death, he and I sat in McArthur Park in Los Angeles eating McDonald’s, as I had purposely searched for, and found him.

Found him not to take revenge, although as an adult and for most of the seventeen years I had sworn that if I ever saw him again that I would kill him with my bare hands. I found him to tell him that I forgave him, although his mind was so far gone, I didn’t say the words. My HEART expressed it. Point is, when I looked into his “Eyes” that day, I KNEW that I was looking at a person who was too far gone mentally. He actually asked, “How is Evie doing?” Evie was my mother’s nickname.

Then there are the “Evil-Eyed” folks. What do you think they feel when they “See” the news stories about people being killed every day in Palestine, or many other places around the world? What do those evil people see? They don’t “See” the starving and the misery. They don’t see the misfortunes of others; all they see is themselves. And it’s not about fame, or social status, or success, or lack thereof, or anything else. I have met my fair share of truly evil/bad people in my life, and they cover the entire spectrum of people.

What pics are you taking with your “Soul’s Camera?” Do you see suffering and feel compassion or some other positive reaction? If you are indifferent, you need help. If you are indifferent and go out of your way to hurt others, you are “Evil/Bad” and your time is coming. Many of the people that are in this category go to their graves that way and escape justice, but just as many are punished for their “Evil/Badness”.

It’s hard defining “Evil”. Evil certainly exists. The religiosity of “Good versus Evil”, the “God/Good” versus the “Satan/Evil” aspect, and then there is the simple recognition that there will ALWAYS be the “Good, the Bad, and the Bat-Shit Crazy. Gee, call me an optimist, I like to believe that there are an overwhelming, (and has always been), number of people that ARE “Good” compared to the “Evil” ones, which of whom always seem to be those that are the “Functioning Psychopath Overlords/Puppet Masters” that wreak havoc on our planet. Complacency is on a rapid decline so I fully and optimistically believe that “Good” will eventually overcome “Evil”.

I wrote this on my cellphone just after my “Eyesight/Vision” had returned to normal after a migraine, AND after a few “Willys” on the pipe. So, if this post gives YOU a headache, take a pill, smoke a bowl or joint, and chill.