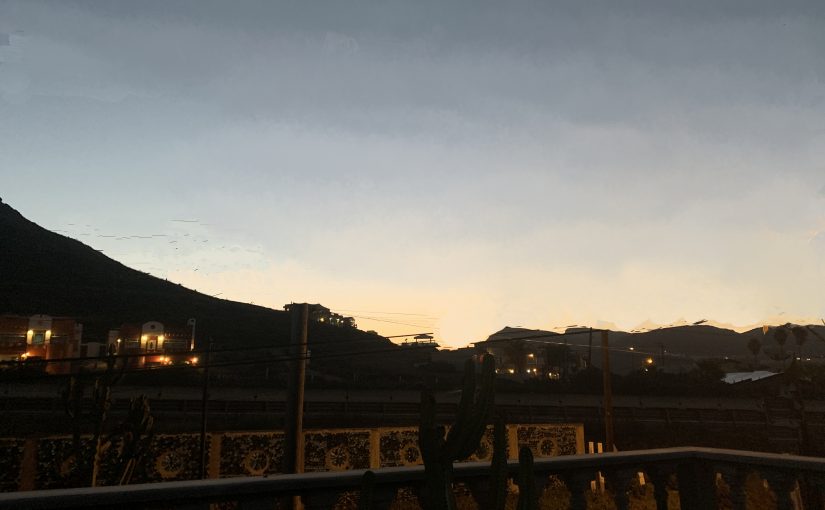 Well it’s Monday morning, the 28th of September at 4:33 AM and about 15 minutes ago I was awakened by my bladder. So, after relieving myself, I went back to bed, turned off the light on my nightstand and thought that I was going to go back to sleep. For the previous five minutes, my buddy Shelton had laid there in his spot at the head of the bed and was still in slumberland, stretched out like doggies do, eyes closed.

I lay there in the dark for a few minutes and a rush of thoughts came streaming through my mind. I was thinking of that first night that Shelton and I were back together the day of Annie’s terrible accident that was the cause of her death four days later in a hospital in Ensenada. That first night back in my Casita, as Shelton lay there next to me trying to sleep, he was shaking, constantly. like a broken washing machine. He had survived the car accident unharmed except for what must have been a very traumatic experience for him.

As he lay there, I kept stroking his furry body until he finally had stopped shaking, and was finally asleep. Throughout that night and for several more nights, in his sleep he would occasionally shudder and jerk as I’m sure he was reliving that moment of the crash. My hand never left his body as I kept stroking him and whispering to him with calm words of assurance that he was okay. After four days, the nightmares went away, and he became that normal puppy dog that he had been for the two months before when I had been babysitting him while Annie was away in San Diego.

So, here I sit, with Shelton on Annie’s rooftop deck next door to my Casita (part of the estate where I live), sitting in my folding camping chair, you know, the kind with the beer pockets in the arms of the chair, and Shelton doing his thing, exploring the deck, sniffing, and now he’s lying alongside my chair. It’s another hour and a half before Sunrise, and as I am writing this (on my iPhone) I occasionally look up at the stars hoping to see that UFO again, (that’s a whole other story here on my website).

The inspiration for this story isn’t so much about Shelton and I, and his recovery, but something else that caused me to get up and write. And that is, how my experience with Shelton relates to one of my adult children and myself. What Shelton went through as it relates to what many of us go through as humans. Our pets, in my case, my adopted little doggy Shelton, certainly have feelings/emotions, and they react to trauma much the same way that humans do, and they also react to love the same way that we do.

My family was broken apart by divorce when my son was fourteen and my daughter was ten. Without laying the blame on anyone, I can say that the breakup of our family affected all four of us, differently, and with different degrees of psychological effects and trauma on all four of us. One of us suffered the most and continues to have to deal with the effects of the divorce and separation twenty-five years later.

Over the years I have tried to restore a relationship like I thought had as a loving father with that now adult child for obvious reasons. Over the years, I had had problems dealing with the issue because I would have an emotional knee-jerk reaction to not having the perfect kind of relationship that parents should have with their children, sans any negative influences. My reactions used to be a mixture of disappointment and sadness mixed with the typical “Why me. Lord? Why am I the one to blame here?”. Thankfully this changed several years ago, realizing that it wasn’t about ME and how I felt. It was all about her, and what she was suffering through.

Again, not taking the blame or casting the blame on someone else, I recognized that all I could do was to continuously show my love for her and not to allow my selfish concern for my own feelings to control me, my reactions, and roadblock our relationship. And here is where it has a simple, yet profound similarity to Shelton. Just as I showed that calming and healing love towards Shelton, I continue to show my love and assurance to my daughter, without my ego interfering or influencing my own psyche.

It’s natural for us to love our children and it’s also natural for us to feel the pain of rejection, and to selfishly express that pain. What I’m saying is that I KNOW my daughter loves me, and I KNOW that she has had to deal with her own issues all these years because of the trauma of divorce and separation, and the very best that I can do as a loving parent is to constantly express my love and assurance, like I did with Shelton that first night and since, when he suffered HIS traumatic event.

Pets, like Shelton eventually forget. Humans do not. Pets like Shelton adapt quickly when smothered with love. Humans do not. Humans sometimes suffer their entire lives, battling all kinds of things like depression, resentment, anger, and so on, and when we can set aside our own feelings and selflessly show nothing but love, it is all we can do, and all we can hope for. I am armed with that hope, Not hope for me, that I would see normality, but hope ONLY for my daughter, that she would some day conquer those feelings/issues that have had a negative impact on her and on her development as a human being. In spite of everything, my daughter is a wonderful, loving person, with compassion for others around her, the best daughter in the whole wide world.

Like I said, I KNOW my daughter loves me, and I know that SHE knows that I love her with all of my heart, and THAT feels really good. Shelton KNOWS that I love him also, as he IS like my shadow. It’s 6:14 AM, and as you can see, the Sun is beginning to rise. Shelton, who was pretty quiet for the past hour or so, just saw something to bark at (he does a lot of barking). I have finished writing my early morning thoughts and I hope it will be an inspiration to those who read it.