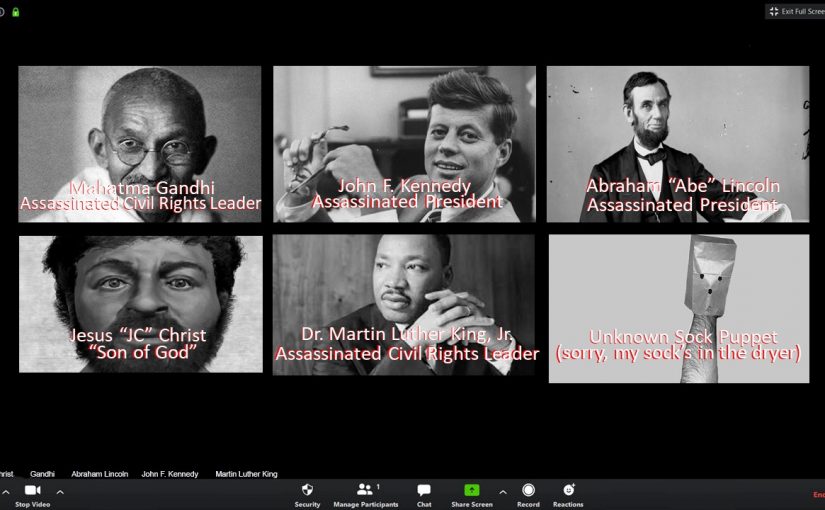 UNKNOWN SOCK PUPPET: So, here we are, all six of us in one conversation together for the first time, thanks to “ZOOM” (you gotta love the technology). First a shout out to all my friends and relatives watching this “Live” right now. I appreciate that all 23,783 of you have tuned in to my channel to take part in this Round-Table discussion with a few of my buddies.

For those of you watching and/or listening to this Zoom meeting that do not know these fine gentlemen, let me introduce my buddies to you in alphabetical order.

First, to my upper far right on the screen, is my good friend and “Non-Violent Intervention Advocate”, Mohandas Karamchand Gandhi, good to see you again my friend, (applause from the other four dudes).

Secondly, to my far right on the screen, is a man everyone I’m sure have heard of before, all the way from Palestine, the one, the only, “Son of God”, JESUS CHRIST! (applause from the other four dudes).

Then in the upper middle is my all-time favorite President and “philanderer”…..John, how have you been doing, (applause from the other four dudes).

Lastly, directly to my right on the screen, is Dr. Martin Luther King Jr. another great advocate for change through peaceful protest. Martin, it’s great to see you again (applause from the other four dudes).

A quick comment here. We do NOT stop at any time to advertise any products or services. If you want the latest in fashion “Depends” or a battery-operated “Rubber Ducky”, check out some other dude’s podcast. We do not ask for donations, but we will graciously accept your support, even if it’s a pound of home-made Venison Jerky.

Let’s begin here. We all know each other and know the opinions and the position we all take on a variety of subjects. Today we are going to discuss those subjects familiar to us for the benefit of the viewing audience that may not be aware of your thoughts, opinions, and the positions the five of you have taken on key subject matter.

First subject, WAR, and the killing of millions and millions of innocent people. JC, I know you have been around the longest of the six of us, and seen the most deaths due to wars, genocides, and aggression, tell us your first thoughts about this topic please.

JESUS: Well, WAR SUCKS, BIG TIME! I’m soooo ashamed, really, that so many of my followers killed so many people in my name over the past few thousand years. I guess they didn’t get my message. I never said to torture, maim, and kill to “Convince” folks to follow my example of love, charity, forgiveness and peace. I’m pretty sure that “Dad” kept the gate closed and locked on them. The message was lost in an abundance of greed, selfishness, and ego long ago.

JFK: Well, I think everyone here at this Round-Table today knows that I inherited Vietnam and I really was not excited about killing a bunch of Vietnamese people over “OIL”, as you know, the big three Oil Companies had thought that there was some sort of vast reserve of oil off the shores of both South and North Vietnam. As we know, it turned out to be a fluke, and the wrong reason to go to war anyway. Then you know, a week before Dallas, I had told the Zionists to halt their Nuclear Bomb development. That last speech of mine, well, some say that’s what became the “Straw that broke the Camels Back” for the Elite/Cabal/Zionists, and look what happened to me. Yeah, WAR really does suck, big time.

ABRAHAM speaks: Yeah John, we both tried to change things in Washington for the good of the country, and look what they did to us, and to Martin, and to your brother Bobby.

ABRAHAM: So many people died under my watch so sad. We finally ended that war on April 9th, 1865 and six days later, well, it was a rotten play anyway, I was really falling asleep when……Well, you know what happened. What really pissed me off about the Civil War is the fact that it really wasn’t about slavery as much as it was about those bankers throwing tons of money at the folks in the south. If it wasn’t for those asswipe European Bankers, I don’t think we would have had that war.

UNKNOWN SOCK PUPPET: How about you Martin, your thoughts?

MARTIN: Yes, I abhor violence of any kind, that’s what I “preached” all my life. Thankfully I guess, colored folks who were killed in Vietnam was a minority of the population at that time, and the numbers killed, 15% or so of the total, reflect that minority. If you are other than “White”, you are still considered as the “Minority” in this country. I do feel sad for all the families of the white dudes who died, who couldn’t afford to go to an Ivy-League college and get exemptions like many rich kids did. Being from a wealthy family made a difference even if you did enlist, especially if your father was a General or Admiral. “Cocaine” McCain just had a bad day at the office, flying his A-4, bombing the shit out of everything he could see, until the enemy shot him out of the sky.

JFK: Yeah, and that traitor actually sold out to the Commies while he was in Hanoi Hilton. It also helped that his daddy was an Admiral. That all happened after my watch. Had it been up to me, I would have told them to keep his sorry ass.

UNKNOWN SOCK PUPPET: Mr. Gandhi, I see you raising your hand. Yes, I saved you for last, please give us your thoughts on the subject.

GANDHI: “If we are to teach real peace in this world, and if we are to carry on a real war against war, we shall have to begin with the children”. As parents, we teach our children to follow in our footsteps. If our path is racism and violence, our children will become racist and violent, but if our violence is too insane, sometimes children do manage to grow up in defiance of the parent’s insanity and turn to non-violence and goodness. Neither racism and viciousness, OR goodness is found in a “Gene” so therefore it cannot be inherited, hatred and viciousness CAN be taught, and unfortunately, too many children that are taught evil in general, are sucked into that way of life unknowingly. So, I say, wars and killing are based on two things, a “Learned” capacity for evil in general, and greed. JC, you chased the money changers out of the Temple because you recognized their greed, right?

JESUS: Yes, but as we have seen in the past 2,000 years or so, the money-changers didn’t go away, they just became more and more sophisticated, just look at the world today, 1% own and control the other 99%.

JFK: I warned the people, shit, even Dwight warned people in his last speech.

UNKNOWN SOCK PUPPET:  It’s interesting that the topic of wars concluded in comments regarding the human condition as far as the financial aspects, i.e., the economics of war. Final thoughts, let’s start with you John.

MARTIN: “History will have to record that the greatest tragedy of this period of social transition was not the strident clamor of the bad people, but the appalling silence of the good people”.

ABRAHAM: “I am a firm believer in the people. If given the truth, they can be depended upon to meet any national crisis. The great point is to bring them the real facts”.

GANDHI: I would say to everyone that is watching and listening today, “You must be the change you wish to see in the world”.

JESUS: “Blessed are the merciful, for they will be shown mercy”. I really believed that when I first said it, but look at what a shit-hole this planet has become. Gandhi said it correctly, it’s the greed in man’s heart. It’s also the selfishness, the violence, the utter lack of mercy that has gripped the few, that 1%, that has brought chaos and strife to mankind. My suggestion, and I know that many have thought that I was the person that originally said this, people need to follow just one single thing, “The Golden Rule”. That’s it, no dogma, no church, other than the “Church in your heart”. Simple.

UNKNOWN SOCK PUPPET: Well, thank you JC, and thank you John, Martin, Abraham and Mr. Gandhi. It has been wonderful to see you again, and to hear your thoughts. We definitely will have to do this again some time.

(speaking to the listeners now)….Friends, thank you so much for watching and listening in to our ZOOM meeting today. Please share the link with your friends and neighbors who did not have the opportunity to take part in this meeting live. To everyone, stay safe, follow the “Golden Rule” and watch for future ZOOM interviews.

We are looking for a few volunteer “Voice” actors as we intend to record the audio of this Zoom meeting for publication on the YouTube Channel, “The Unknown Sock Puppet Interviews” in the near future. If you can read a script and sound like any of the “Characters”, especially JFK, please contact us via the message form below, or send an email to: theunknownsockpuppet@gmail.com