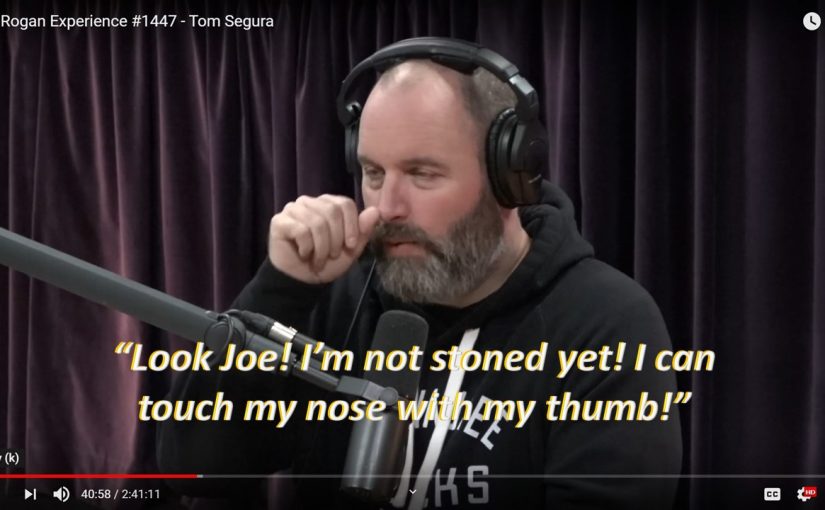 The “Cover” image which I thought was was kind of funny, I swear, happened accidentally, as I hit pause at that precise moment, so I created a Meme out of it, hahahahaha. The following image “Quote”, was an alternate choice. Vote on which one you think is funnier. 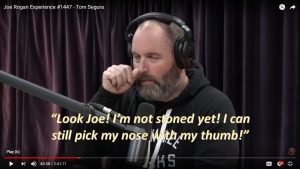 Well it looks like I’m going to be writing a review on this episode. I wonder how may days THIS one is going to take? OK, off the bat, the discussion about the gruesome shit, (dude’s faces getting chewed off by a Bear, etcetera), is NOT that entertaining at least for me, and perhaps not that entertaining for a majority of your fans, so get off of that shit, you both are too funny not to be entertaining,

Joe, you’ve been coughing a little bit this past week or so, go see your doctor, and please cover your mouth when you sneeze in your local Walmart.

Here’s what happens when someone sneezes at Walmart 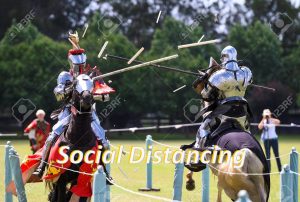 Joe, Italian IS a “Beautiful Language” and it’s known as one of the “Romance” languages, along with Spanish (Castilian in my opinion), Portuguese, French, and Romanian (believe it or not). Here’s a funny video of a bunch of Mayors in various Italian towns admonishing their people”

Have you heard about the new virus, “Moronovirus?” 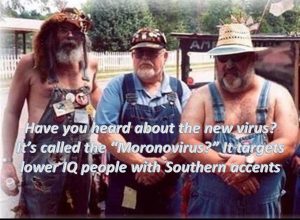 Here’s a new “Made in Italy” virus, “The WOP-a-Rooni” virus 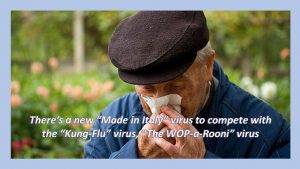 How about the “Kikel-Tov” virus 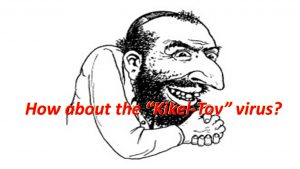 Then there’s the “Wasi’chu Flu”, Very few will understand this one. It really depends on what “Native” language you speak/understand. 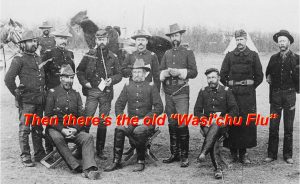 Let’s not forget the “Cohee-Itus” Flu 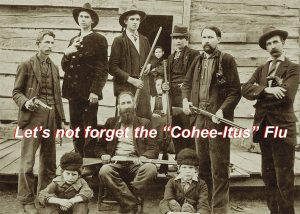 And finally, a Meme about the most horrible disease of them all. A fairly large percentage of people of the Judaic religion as well as most of the rest of humanity abhor this disease. More people have died directly and/or indirectly from this terrible disease than all other transmittable diseases combined. 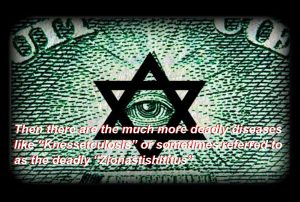 Joe, you’re show is never just a “Distraction” for me, as you can see, that is IF you  ever come to my website and actually read my reviews of your show, I have been inspired quite a bit by things you say, and things your guests have said, or the “Topic” at any given moment in your podcast, and I thank you for that.

Joe, this particular episode, I noticed that when your assistant has pulled up a video that you are talking about, you didn’t show the video to your audience like you usually do at least 99% of the time, specifically, the “Rocket Flat-Earther Dude” this time. I do like it when you do give your audience a screen-shot of whatever you are looking at, at the moment because at least if we can’t find it, we’ll have at least seen it on your program. I know you probably will never read this review, but if by some remote chance you do, please take note of what I just said, thanks.

With regards to your brief conversation about Tom Hanks, Steven Spielberg, the Hollyweird “A” List and “Pedophilia, I think both of you are certainly allowed to express your own opinions, but until shit like that is either totally proven or disproven, you should not be lumping everyone into one big pile of what you call, “Morons”.

Obviously, there IS some shit that’s been going on for a very long time, and guess what, Weinstein is not the first and only case of abuse, in his case, it was against women. Pedophilia is real, and who’s to say who’s been fucking who in Hollyweird. That little girl-star that was a Spielberg actress in “Poltergeist”, Heather O’Rourke, was fucked in the ass and died of Intestinal Stenosis! If you or anyone else were to look up the cause of Intestinal Stenosis, they would find the following…Any trauma to the anal canal. In women, childbirth is a common cause. Other causes include the insertion of a foreign object, and anal intercourse. Not sure what anyone else thinks but my bet is she did not come to her demise after giving birth to a child. So, hold your own fucking coffee on that one because we really don’t know the truth regarding Hanks, Spielberg, or anyone else in Hollyweird for that matter. Like I said, unless you KNOW the truth and can share it with the world, I don’t think you should be lumping all the people that DO believe there is something to this “Hollyweird Pedophilia” shit into “your” predisposed judgement/viewpoint as you label those people as “Morons”.

I’m sort of glad that the Pedophilia discussion was close to the end, cause I have to say, for this show being two fellow stand-up comics chatting, this entire show was mostly depressing, and not entertaining, as far as the direction your conversation was going, and that, for an entire Two Hour, forty-One Minute, and Eleven Second Show. My rating? Two and a half “Stars” out of Five. Pretty much, not funny, and I was expecting funny. Sorry. I did have fun creating my Memes though, so, thank you for that.

P. S. It only took me three hours to watch and review this particular episode. I can see why Joe cut it an hour short, as his shows are normally three hours. He probably felt the bad vibes about the whole thing as I did. Thanks for making it only a two-hour show Joe.

P. S. S. I find it kind of interesting, and telling, to see the differences between a person that IS funny, but perhaps only funny when he or she is performing their memorized “Routine” as I would imagine that so many professional “Stand-Up Comics” ARE quite capable of doing.  Funny on stage, and MAYBE a little funny during a real/normal conversation, like tonight as I watched this episode with Tom Segura. He was okay, made some funny comments, but compared to Duncan Trussell who is a really super-intelligent dude, and naturally funny, Tom Segura was duller than a Popsicle stick. No offense Tom, I’m sure you are hilarious on stage, but you did not come off as a “Naturally Funny” dude without your script in front of you. I might be wrong, maybe you or Joe, or both of you were not feeling well during the “Live” taping, which if that was the case, I hope you paid a visit to your doctors. The other real possibility is that with all this Corona Virus shit going on, and the “Self-Isolation part of it, maybe that’s what has affected you dudes? Anyway, as far as I see it, the comparison, and forever “Bar” that people need to reach for as far as I’m concerned is Duncan Trussell. He is a person with I’m sure a “Genius Level IQ”, has a “Natural” gift for conversation over an extremely broad range of subjects, and says some really funny shit along the way, that’s the difference between someone like Segura and Trussell. Some may really enjoy this particular episode, so enjoy.

Here’s the link to the episode, if anyone is still interested: