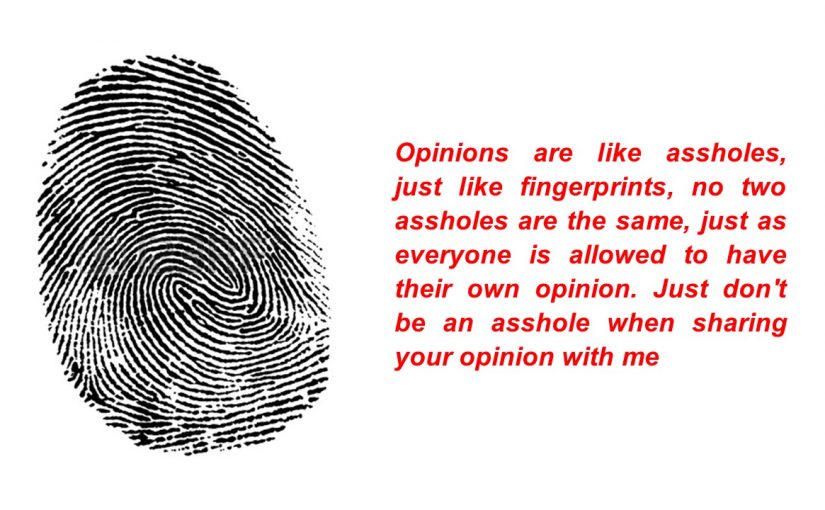 Opinions are like assholes, just like fingerprints, no two assholes are the same, just as everyone is allowed to have their own opinion. Just don’t be an asshole when sharing your opinion with me

The “Heart” of a person speaks louder than his words, written or spoken….

There’s a dude on farcecrap that I WAS “Friends” with for several months, someone that I had a private chat with once, that is a superb, gifted, writer. He absolutely has a command of the English language, and he has a wonderful narrative/oratorical writing style. I have always enjoyed reading his posts, and the tons of “comments” that he always gets back. He gets these tons of responses back on his posts because he has a ka-jillion “Followers”. His main topic is ALWAYS Anti-Trump, which I enjoy because I don’t particularly like Trump either.

His writing/ranting is hilarious 99% of the time, and fun to read, and sooo way out there with his hatred of Trump that I’m surprised that the Secret Service or the FBI hasn’t knocked on his door yet. Then a few times, I had “commented” with a different opinion/view of a particular political direction he was going with his strong Anti-Bernie stance, and he “Un-Friended” me.

He unfriended me NOT because I called him a “douche-bag illiterate prick”, or “Illegitimate child of a Swamp Rat”, or any other demeaning and childish names that he normally calls people that oppose his views/opinions, he unfriended me, more than likely, because he doesn’t want to see/hear my opposing comments, and/or he doesn’t want his zillions of followers to read my comments, even if my comments potentially could have made a lot of sense to many of his followers.

For the longest time I have had a suspicion that he was either a Zebraist-Jew or a Non-Jewish Zebraist supporter. I only felt my suspicions after watching a few of his personal videos on his page showing him in a synagogue for whatever, a funeral, or Bar-Mitzva or something, and another video in his living room with a female friend/associate (roommate?) saying, “Molsotov”, sounds Jewish to me.

Now, I must add here, there is nothing wrong in being a believer in the Judaic religion minus the really fucked up bullshit they call the “Talmud”.  If you are a follower of the Talmud, you are one evil mother-fucker, and if you ALSO are a hard-core zebraist, that’s even worse. So, the bottom line is, he has every right to “Friend” or “Un-Friend” whomever he wants, I really don’t care that he unfriended me, I just don’t get his posts (which I enjoyed) on my newsfeed anymore. In fact, I don’t care one teeny-tiny bit that I was “Dumped” because I happened to comment in a manner that was displeasing to him, IF that WAS the case. The only thing I really miss more than his great oratorical writing, is seeing how many of his friends and followers were responding with Pro-Zebraist comments to his posts, because I loved responding to THEIR asinine comments.

Which brings me to the title of my post…..The “Heart” of a person always speaks louder than their words, written or spoken….This dude, as brilliant as he thinks he is (and I think he’s brilliant as well), is either a Zebraist-Lover because I know from his own words, that he is not Jewish and that he was raised in an other-than-Judaic religion, and that he does support the dementia-rattled asswipe Joe Biden (Biden has publicly proclaimed his Pro-Zebraist position)……Or this dude is a complete idiot lacking common sense in spite of his obvious intelligence and wonderfully skillful writing ability.

People with closed minds generally have a heart that is less giving, and less FORgiving, and their actions speak louder than their gift of speech, written or oral. The only time that I have “Unfriended” someone was when their comments were directed at/to me in a vile and disgusting manner. Bam! Don’t let the door hit you in the ass when you leave.

I never unfriend someone just for sharing an opposing viewpoint to one of my posts when they have done so in an adult manner. I wouldn’t mind it a bit if Thomas Clay Jr. sees this post of mine, so those of you that are my friends, and also are friends with this wonderfullofhimself writer, sorry, Freudian slip there, please feel free to share this post with him. His “Heart” speaks louder than his words, and although he normally is brutal with his penmanship when refuting someone’s opposing comments most of the time, he has never said one thing to me in response to my many comments, either on his posts, or in response to someone else’s comment on his post, and quite frankly, it’s not the kind of heart that I particularly care for.

I always say to my friends that MIGHT offer a different take on my posts, “It’s ok, we can, as gentlemen, agree to disagree” works well for me. When someone is obnoxious in a rude fashion, I usually do one of two things. Completely ignore the person and not respond at all and “Delete” them if they happen to be on my “Friends List”, and/or I respond with a Meme, like “Sometimes sharing Common Sense with a Sheeple is like giving a dead man a Flu Shot”, or another favorite Meme of mine that I sometimes use is, “Death or Stupidity, only your friends know if you suffer from either affliction”…..then I unfriend them because of their childish, immature vitriol.

Our actions speak louder and reveals much more of our true character/nature than a mountain of words (written or spoken). Many of us have become accustomed to using social media platforms such as farcecrap to share our voices, our messages, as if we were in a Town Hall Meeting, communicating with others about a given subject.

Being the nature of the beast, I try my best to be open to hearing the differing views from other people, and honest and polite as I can be with my own “Words” (I know I do fall short of that goal once in a wile). We all need to remind ourselves that it is what it is, a social media platform for sharing our thoughts, our ideas, our responses, to a myriad of different subjects from politics to you name it. If we can do so without raising our blood pressure, or someone else’s blood pressure, it’s a Win/Win situation.

As far as Thomas Clay Jr. “Unfriending” me? Check out his writing, it’s an awesome gift that he has, and his postings are sometimes brilliantly brutal in his attacks on what he perceives to be, his enemy, and especially his rantings on Frump. So if you abhor Frump, please check out Thomas Clay Jr’s farcecrap page. Personally, I will not miss his writing now that he has revealed his true heart. Sayonara, don’t let the door hit you in the ass.