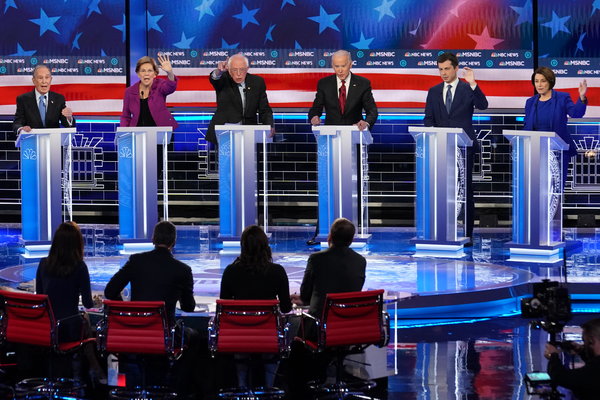 It’s now 12:30 AM on Thursday, and I started getting creative yesterday morning around 4:00 AM, and I’m still going like one of those bunny rabbit batteries. No NAP for a change! I spent a lot of time re-doing many of my various “Group” and “Page” Cover Images, and last night I decided to watch the debate, and I’m glad that I did. The following is my “Take” on what went down.

With an All-Star Cast of grown-ups acting like they were six-year-olds in a sand-box, all fighting over a….

The Democratic Debate in Las Vegas, Nevada at the Paris Theatre and Concert Hall, the same venue used for the “America’s Got Talent” show, which made me chuckle because it’s like a oxymoron, (living death is an example of oxymoron).

I like to break it down further just by separating the two words – “Oxy”, and “Moron”. I suppose the excuse could be made that they are all morons because they were deprived of oxygen while they were still in their mother’s womb because she was snorting so much cocaine that it fucked up her system, thus depriving Joseph R. Biden Jr., Michael R. Bloomberg, Pete Buttigieg,  Amy Klobucha, Bernie Sanders, and Elizabeth Warren of oxygen, which effected their ability to understand what “Common Sense” was.

Yes folks, having a ton of money, prestige, high political office, the ability to cheat your employees out of having a normal life by paying sub-standard wages, does not necessarily or automatically give you “Common Fucking Sense”.

It doesn’t take “Common Sense” to be a ruthless asshole.The performers on stage tonight are certainly not getting the old “hold my lit lighter in the air” thing from me.

So here we go, it’s Wednesday the 19th of February 2020. who likes to gamble? We’re in Las Vegas after all, for this debate that could be a great debate, or another shit-show like they have had in the past

The moderators are Lester Holt and Chuck Todd of NBC, Hallie Jackson of NBC and MSNBC, Vanessa Hauc of Noticias Telemundo (whose reporting has often focused on climate issues) and Jon Ralston of The Nevada Independent.

I still am a little bothered that Tulsi Gabbard was not on the stage. The establishment and the Main Stream Media (MSM) has deliberately ignored her, and in some of the previous debates, they had candidates on stage that no way in Hell, were they as “backed” by the people as Tulsi was, yet, she was not invited, and I’m not even going to discuss the one debate that she WAS invited to, that she boycotted. I say, good for her, well, good for her in that she had the integrity and guts to wave a middle-finger at the media and the Democratic Party assholes. Not good for her that she doesn’t have a fucking chance. The only option for her is if someone, well, specifically Bernie were to actual win the Democratic nomination, she could be a great VP pick if I were in his shoes, certainly and at the very least, considered for Secretary of State, with her experience in war and such.

Somewhere around 7:21 PM PST, the shitshow started getting ridiculous. It was becoming a fucking sand-box with six six-year-olds fighting over a petrified dog turd.

The back and forth, back and forth, not even answering the questions they were asked, going off on their memorized talking points from hundreds of speeches, hurtling some really nasty verbal jabs at one another, literally calling each other names, “You fucking Commie!”, “You fucking billionaire asshole!! interrupting each other, first one on one, then another kid enters into the fight making it a three-some, interrupting each other, than a fourth, than a fifth kid, than all six are yelling at each other. I’m glad the internet channel that I was watching on MSNBC had short commercials because I started laughing so hard trying to write this. So, I’m stopping right now to re-load my bong, hahaha.

Someone must have spoken to all six of those selfish little kids through that ear-plug audio thingy that each one of them are wearing because eight or nine minutes into this tug-o-war with a piece of dog-shit……whomever it was said through their ear-plugs, “Alrighty here kiddies, CUT THIS SHIT OUT!! and get back to answering the fucking questions, OK?” So, it immediately calmed down, as if a parent had walked up to the sand-box and threw a bucket of warm horse piss on all of them.

The first thing that struck me, (and I had missed the first 30 minutes or so because I had to take a PEETOKEFARTANDASMOKE) was that some of the potentials on the debate stage had what seemed to be rehearsed answers, i.e., for some of them not all, the dudes in the seats of power gave a few people on stage prior to the debate, what the questions would be, every fucking question. So, I ask of you, if you are at all politically inclined enough to care, listen/watch the best freak show in the history of debates going all the way back to Abraham Lincoln.

For the most part, it was almost as enjoyable as watching an old Jerry Lewis movie. Oh shit, I forgot to make popcorn!  The fact that this was six adults fighting, sometimes viciously, was reason enough for me to first write about it, second to compare them with six six-year-olds fighting over this huge hard as a rock (still nasty) Saint Bernard turd about seven inches long and two inches thick. Okay, it WAS petrified. Funny shit tonight.