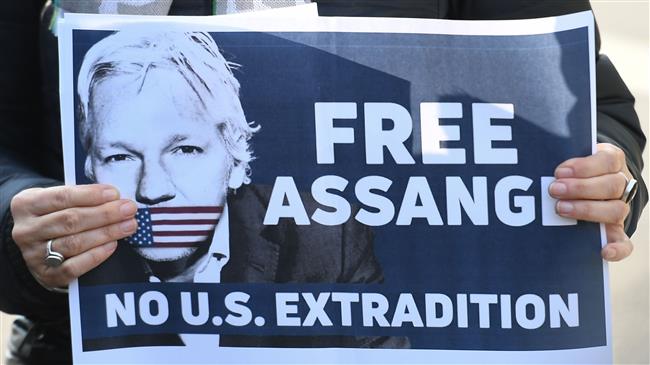 It was around 1:45 AM here, Monday morning February 24th 2020 10:45 AM in the UK, and I happened to click on the “Live” broadcast by SPUTNIK at HM Prison Belmarsh, where there are scores of people protesting in support of Julian Assange. Tuned in “Stoned”. I have to say, when I say, “Tuned In”, I mean REALLY “Tuned In”, as I felt transported there, like magically, walking along in the crowd, replacing the camera’s lens, with my eyes.

Found it on Sputnik’s website. I’m back to protesting, this a fun trip to the UK, and it didn’t cost me a penny thanks to my Ensenada Sunrise. I didn’t hear a single person yelling, “LOCK HIM UP! LOCK HIM UP! LOCK HIM UP! ” (maybe because he’s already locked up?). Great place to meet chicks. Kudos to Sputnik for the excellent camera work/coverage of this protest. Great video shots of Julian’s father, John Shipton, holding a small sign that read, EXPOSING WAR CRIMES IS NO CRIME.

Today’s protests outside Belmarsh Prison are in support of the founder of Wikileaks, Julian Assange as authorities hold an Extradition Hearing today February 24th 2020.

Just in case there are a few people reading this that have just awakened from a long coma, from Wikipedia: Julian Assange was allegedly investigated by the Eastern District of Virginia grand jury for computer-related crimes committed in the U.S. in 2012. His request for asylum was granted and he remained a resident in the Ecuadorian Embassy in London since 2012. In 2019, an indictment from 2017 was made public following the termination of his asylum status and the subsequent arrest by the Metropolitan Police of UK in London. According to the indictment, Assange was accused of conspiracy to commit computer intrusion in order to help Chelsea Manning gain access to privileged information which he intended to publish on Wikileaks. This is a less serious charge in comparison to those leveled against Manning, and carries a maximum sentence of five years with a possibility of parole.

Assange was arrested on 11 April 2019 by the London Metropolitan Police for failing to appear in court and now faces possible extradition to the US. His arrest caught media attention, and news of it went viral on social media, especially on Twitter and Facebook as it involved the possibility that the founder of Wikileaks and its editor-in-chief would be brought back to the US to face trial. Assange himself does not consent to extradition to the US, in an ongoing move to prevent this from happening. On 23 May 2019, a grand jury added 17 espionage charges related to his involvement with former US Army intelligence analyst Chelsea Manning, thus bringing a total of 18 federal charges against Assange in the US. On 15 July 2019, documents revealed that Assange had used the Ecuadorian embassy to meddle in the 2016 US Presidential election and had met with Russian and various hackers from around the world to do so.

Let’s face it folks, Julian Assange is not a fucking spy, he’s a political prisoner. He is a journalist who had the guts to expose the evil shit the fucking USA and other asswipe countries have been doing in the Middle East and other places around the world.

All I can say is JUSTICE IS COMING! To all the war criminals still living, there is not rock big enough for you to hide under. You shall be arrested, tried, convicted, and punished for your crimes against humanity.

For everyone that seeks real justice in this world, you must ORGANIZE/ Otherwise all of our protesting and other activities is “Useless as Wings on a Penis”.