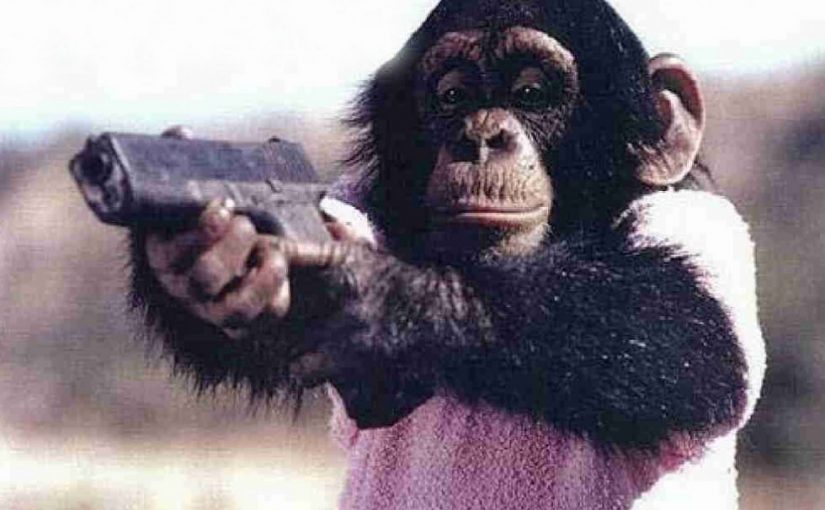 This is a short film, 7 to 10 minutes long, and it describes a scenario depicting the use of guns that can be viewed in either a positive or negative manner, depending on your particular persuasion. The film is appealing to both the Pro-Gun NRA types AND the Anti-Gun lobby, and can be interpreted both ways, pro and con. Location is a scruffy, but comfortable “beer only” bar in Any Town, USA.

It’s Karaoke night at the “Golden Nugget”. The regular patrons in this bar know each other, some are real friends or co-workers during the day. This dude Bob, a local long-time patron of the bar is being summoned by the KJ to sing, (right after the last 45 seconds of someone’s rendition of “Betty Davis’ Eyes”).

Another 60 seconds of the camera taking a quick 5 cent tour of the bar, including where we see Bob sitting at the head of the two rows of old theatre chairs facing each other out on the heated “Smoking Patio”. “Hey Bob, you’re up next” someone informs Bob.

The patio was great. Usually the seats were all filled with smokers, all 14 of them whenever Bob was there because the bar was always packed on Karaoke nights. Most of Bob’s time was spent on the patio on nights when there was no entertainment, like Karaoke.

On the two Karaoke nights, Wednesdays and Saturdays Bob would split his time equally between the bar, and the “Smoking Patio”, primarily because he really enjoyed, and appreciated everyone who sang. He would always complement the singers when they were finished singing with high-fives and fist-bumps.

On the occasion when Bob happened to stop by once in a blue moon on non-entertainment nights, he would spend all his time on the patio where he sort of “Held Court”, being he was an older gentleman who had been around the block a few more times than the average bar patron.

The stories that Bob would tell, and good sound advice when someone asked for it, and a common sense approach to helping someone having a difficult time with a serious issue, like depression or PTSD. This was Bob, always a caring and thoughtful person. All the regulars loved to listen to his many stories and sometimes his occasional off-color jokes and bits of wisdom.

“Okay folks, let’s give a warm welcome to Bob”. Shot of the stage, as Bob begins singing “My Way”. As he is singing, the camera switches to another camera, panning the bar, with bar-stools, tables and chairs.

All the regular bar patrons LOVE it when Bob sings, all the talking stops as everyone intently listens whenever Bob sings. Even the people from the heated “Smoking” patio have come in the rear door to listen to Bob.

Bob ALWAYS does only one or two songs on Karaoke night, he always ends his night of entertaining his friends by singing “My Way”. Sometimes that’s the only song he sings.

As Bob begins singing, a camera now focuses on a table at the back of the bar, zooming slowly until the shot is focused on this one dude, with an emotionless, blank stare, staring at Bob. For this “story treatment”, we call him, the “Emotionless Dude”.

Bob’s has finished singing, and of course the entire bar is clapping and cheering, because he ALWAYS knocks his songs out of the park, especially “My Way”. After Bob has finished singing, we see him as he makes his way through the bar and the “high-fives” and “fist-bumps”, towards the back, and the “Smoking Patio”.

Ending scene is on the “Smoking Patio”. The dude that had sat there emotionless while Bob was singing, has just walked into the patio area from the bar and directing his comments to Bob says loudly, “How dare you sing that Frank Sinatra song. No one is allowed to pretend they are the great, (may he rest in peace), Frank Sinatra”. After his brief and angry statement which had silenced all of the various conversations on the patio, “Emotionless Dude” walked out the screen door leading to the back-parking lot assumedly, to leave the bar. Bob shrugs his shoulders.

The conversations had stopped. Bob says to his friends, “Well, I WAS going to tell him that I KNEW that Frank would not have been upset at my singing that particular song, because I’m probably the ONLY person in the world that unknowingly sang that song for him nearly forty years ago. You all have heard me tell the story before, you know, that time that I was at a large private party in Las Vegas when I sang “My Way”, and when I had finished the song, I noticed Frank standing outside one of the doors on the back wall, clapping and nodding his head in approval”.

Right at the end of Bob’s brief story, the “Emotionless Dude” comes walking back in from the back-parking lot, levels a 12-Gauge shotgun at Bob’s head, pulls the trigger. Bob’s head is gone. His body is still sitting upright, but his head is gone, (picture really gruesome, bloody hole and shoulders where is head was sitting just a second ago.

Not even a split-second later, responding to this threat before them, in slow motion, we see five men and two women pulling their pistols out and shooting Bob’s assassin. The last bang, is a BIG BANG, because one patron had pulled out one of those shotgun pistols, you know, the kind of pistol that shoots a shotgun round. So, the first four bangs are ALMOST simultaneous with two of the bangs, blasting out simultaneously, and at the end of this rapid barrage of gunfire, one BIG BANG.

The heated “Smoking Patio” is now filled with gun smoke, after that one second barrage of gunfire, so from that day forward the patio became known as, “The Smoking Gun” patio.

Oh, and that shotgun pistol that I mentioned earlier, it took “Emotionless Dude’s” head clean off and the slow motion instantly transforms into regular timing, as we see the “Emotionless Dude’s” body fall, out of camera view, revealing on the wall behind him, a framed photo of our great friend Bob, singing the National Anthem at Dodger Stadium, 40 years earlier (slow zoom in on Bob, and his signature, and the date the photo was taken).

Anti-Gun argument with this video. “See, if we had stricter gun laws, Bob would still be alive today”. Which is bullshit as even with the strictest gun laws possible, the “Emotionless Dude” would have found a gun somehow, just like all the criminals do ANYWAY.

Pro-Gun argument using this video. The nutso dude is dead. We saved the taxpayers hundreds of thousands of dollars in the legal machine/process and a lifetime of feeding this asshole in prison. Statement from Julie, one of the patio shooters, “We are only sorry that the piece of shit that murdered Bob, pulled the trigger one fucking nanosecond before we pulled the triggers on our guns and took him down. I’m still glad that I had my little pistol with me”.

I first was accepted into the NRA, (actually got a card for a life-time membership), in 1955. I was seven-years old. Before obtaining my “Life-Time” membership in the NRA, I had to take two classes, both on gun safety, and pass a combination written/verbal test. That’s the only “credential” that I feel is necessary for me to say that if you want a reliable common-sense answer to the “Gun Control” issue, talk to me, (or just write my name in for POTUS, I’ll straighten a bunch of shit out after I’ve been sworn in.)