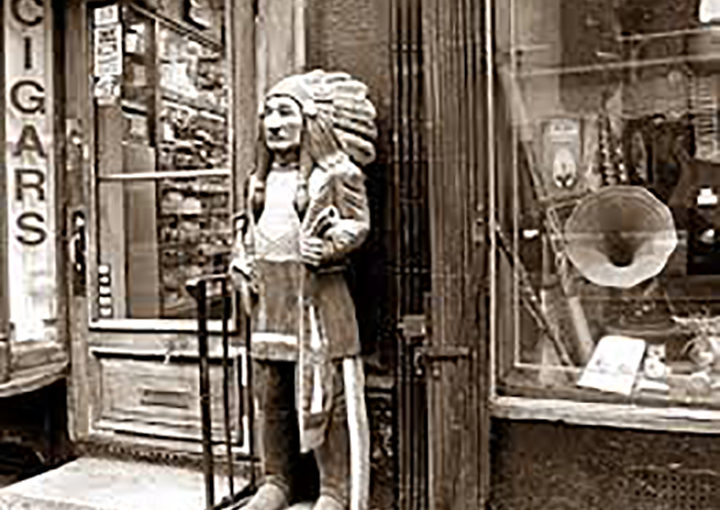 My conversation today at a shop in Ensenada that I THOUGHT was a Cigar Shop. I was taken there by my iphone map app. What turned out to be…….

Me: “Do you have small cigarillos”

(I do NOT speak a lick of Spanish, the preceding translation, like all of the following, are purely for educational purposes…..perhaps I might learn a little Spanish?)

English Translation: “We have no cigars of any kind, senor”

Me: “Then what’s that Cigar Store Indian doing outside the door as I walked in?”

English Translation: “Senor, I think that’s the grandfather of Jose, the man that owns the cigar store that moved”

Me: “He looks like a gnarly old wooden statue to me, and why is he standing so still then?”

English Translation: He’s 107 years old. You’d look like that too if you worked in the Agave fields for 90 years. Yeah, he does stand pretty still when he’s constipated

Me: “Does he ever move from that spot?”

English Translation: “Only once a day when he shits his pants”

The Cigar Store had obviously moved, and the reason I tagged on the “/Artist” is because it was now a Tattoo Shop, with a Constipated Cigar Store Indian hanging around outside, and I was speaking with a “Tattoo Artist”.

Of course, the previous story is purely fiction, except the true part is that the Cigar Store HAD moved, and there really WAS a Tattoo Shop there in its place, this is what I discovered after driving through the heart of Ensenada from the very south end, to the very north end of the city of Ensenada, letting my iphone map thingy guide me turn by turn, pothole by pothole, taking me to the street address and a store that used to be the location of Habanos Cigar Shop at 335? Avenue Primera, Zona Centro, 22800 right next door to Papas & Beer Event Ticket Office, according to my iphone.

I confirmed with the nice young senorita working the ticket office for Papas that, indeed, there used to be a cigar store next door. The tattoo shop was closed. At home this evening I discovered with someone’s help, that Habanos Cigar Shop was now at 1096 Avenida Blancarte, Zona Centro 22800. I’ll be going there at some point to check the place out, and hopefully get my cigarillos.

What really happened is spread over several days in my hunt for “Cigarillos” those thin little cigars made by Swisher Sweets and other manufacturers. I know they are not healthy for you either, but I switched to the little cigars in 2012 after being a cigarette smoker most of my life. No chemical additives I tell myself.

In various trips into town, everywhere I happened to be shopping at, mostly for food, I asked for my cigarillos. The two Walmart stores, two different grocery stores, etcetera. I also purposely stopped at three 7-11 Stores (same logo) and three various gas station ‘Marts”. Every place I looked, plenty of cigarettes, no cigarillos. I was beginning to see a pattern here, what it was still puzzles me. Not a single store, not even the liquor store close to the Tattoo Shop, had anything other than cigarettes.

The very last 7-11 on the way back home didn’t have cigarillos either, but while I was in line waiting to ask the question, I asked the dude behind me if he spoke English. He did. A young dude from Texas. He had been down there in Ensenada for a while, and he and I had a small conversation about the lack of certain types of tobacco products, which turned into a brief discussion about the easy access to weed, which turned into my following him to his truck, which turned into the nice dude sharing a little of his bud with me.

So, to cap this story off, I finally made it to the actual location of Habanos Cigar Store in the north end of Ensenada. Not without getting lost again, thanks to BOTH map/direction apps on my iphone leading me astray. The map/direction apps, the ones that have the pretty female voice saying things like, “At Los Angeles Avenue, make a right turn”. It’s okay in a town like Simi Valley, but when you are ON the correct street/avenue and the algorithm tells you, “Your destination is on the right”, obviously when you are driving, and looking for a small “Hole in the Wall” place like this cigar store I’d been looking for, you are looking to the right, looking for that storefront that you previously saw in the mapping/direction image.

Well, both the Goggle Map and the mapping system that comes built-in were WRONG! I finally made some common sense decisions and made a U-Turn and went the opposite direction towards the harbor. Mind you, I followed the map lady’s (voice) precisely. “Turn left, go straight, turn right”, and it STILL took me in the opposite direction. Even when I was now going in the right direction, even when my vehicle was directly in front of the cigar store, the frickin’ “Voice” was saying, “Your destination is on the left”. So, I looked to my right, and BEHOLD! I AM REALLY THERE! Must be Karma, because just as I looked to the right, a vehicle was backing out of a parking spot directly, and I mean if you measured it with a measuring tape, directly in front of the door of the cigar store.

Habanos Cigar Shop, at Avenida Blancarte Number 10, Zona Centro 22800, Ensenada, B. C. was worth the two days of searching. I bought some Mexican-Made cigarillos, and chatted with the owner, Martin, for about 30 minutes or so. His store has a walk-in Humidor, the kind you see in all good cigar stores, and his English was excellent. His store moved from the Tattoo Shop location six years ago. It’s real close to where all the tourists depart the cruise ships for a day of shopping. Unless someone comes up with a better suggestion, I highly recommend that you stop by Martin’s store.