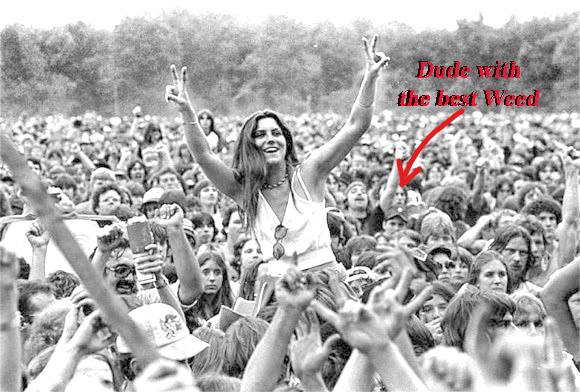 Double-Standard? Nahhh, not really. My daughter and her significant other are currently at the Coachella Music Festival held every year about this time. It is a HUGE gathering of people including celebrities from every genre imaginable.
While looking at various “Stuff” on farcecrap, I noticed that he, (the significant other) has posted for his farcecrap friends to see a compilation of some things they are/have experienced at the festival (nothing wrong with that).
One thing that caught my attention in his brief montage, was a really brief video clip of my daughter in a hardly covers her chest T-Shirt, wiggling her little titties (nothing wrong with that either). It only lasts for a second or two, but it did catch my attention.
Now, let me set this straight. The short video I just mentioned, did NOT upset me in any way what-so-ever. It is what young people do at a music festival, hell, some of them even walk around completely naked. OK, so THAT was Woodstock, probably not at Coachella? Hahahahahahaha
.
My instant reaction? I just found it ironic. It’s OK to wiggle your tits in a public venue, but NOT okay when dad tells a joke (via private text, which included my son and her significant other) based on a real memory. In this case, comparing a dog’s fart, (we can blame it all on “Cleatus”, the Wiener Dog) to a memory of changing a baby’s diaper, one that really WAS smelly because she did not take to nursing and drank nothing but formula.
I indeed changed many a stinky diaper when my daughter was an infant. Hahahahahahaha. Double-Standard? Wiggling your little titties versus the smell of a baby’s diaper?

In case your wondering, yes, my daughter will never see this post, and I WILL NOT purposely share it with her, ever. So, I am safe from her wrath. She probably will not see me do my routine at the Comedy Store in Hollywood either. She may have a change in her attitude towards me someday and watch my very first HBO Special. I DID share this with her “significant other” though, because he DOES get it, and sees the irony in this, and understands the humor of it all.

Thank you for your support. Let’s get this ball a rolling. We are going to be starting up the private messaging again like we had before, unfortunately still via farcecrap, until a volunteer web designer steps up to the plate to help us build that capability on the ITAD-NAO website. The whole purpose of the ITAD website is to get us OFF of the farcecrap pissantshitasshole fucking website.

Other immediate needs. On a volunteer basis for now, we need a WEBMASTER who can work on the ITAD-NAO website, we need a person skilled in “Crowd-Funding” and “Director of Charitable Giving”, we need an attorney to help in the legal matters for ITAD_NAO, including setting us up as a tax-exempt “Church”, we need a Certified CPA to insure the financial integrity of the ITAD-NAO organization, we need a “Chief of Security”, we need a film-maker, first for YouTube, eventually for larger platforms, plus a few other positions. We believe that somewhere down the road, a Billionaire will step up to the plate and write a check for $50 Million or so, which will turn those volunteer positions into paid positions.