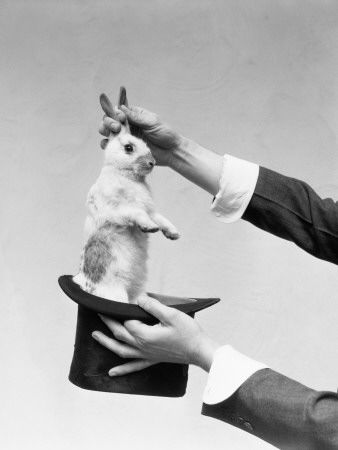 Yesterday as I was walking to my car to get something, I almost stumbled over a cute little Bunny Rabbit in the driveway. I continued walking, and she/he, (the little Bunny) kept hopping along and then it disappeared through a small opening in the north gate into the side yard, and I thought, Ohh, oh, Cleatus and Ellie, the two wiener dogs are going to have fun chasing this bunny around the back yard, I hope they don’t actually catch it. Through the day, into the evening, I kept asking Cleatus and Ellie if they had seen the little bunny. There was no blood or fur to be found so I figured that they hadn’t.

Fast forward, now it’s the following morning, and I’m having my morning coffee on the patio. Cleatus and Ellie are jumping on me competing for attention and loving, which I gave them, when I asked them again if they had seen the little bunny rabbit. Well, that little bunny rabbit obviously out-smarted TRICKED them, and was able to escape.

Immediately it led to this thought. What was the first time someone ever pulled off the “Pulling a Rabbit Out of a Hat, Trick”? Well it happens to be Easter Sunday morning, probably the holiest day on the Christian Calendar. I chuckled a little, here’s a new story to write. The first time that pulling a rabbit out of a hat was the story written centuries later, how this dude, OK Jesus, “Rose from the Dead” or perhaps some dudes removed his dead body.

This is going to sound very sacrilegious to all the so-called christians, but I would rather be thought of as sacrilegious than hypocritical, and believe me, I have known many a hypocritical asshole that presented themselves to the public as being pious christians, including the famous televangelist caught with a hooker in a motel room, the preacher (the one who preached against homosexuality) caught giving another man a blow-job in an airport bathroom, the countless catholic priests who were/are sexually abusing young boys & girls (it’s called Pedophilia). So many instances of Christianity in its full glory.

Wither those disciple dudes stole the body or not, or the whole fucking story was just made up from the beginning. It WAS the first time a rabbit was pulled out of a hat. A trick? You bet, and for 2,000 years they (organized Christianity) have been convincing the “Sheeple” that it was not slight of hand. Give me a fucking break.

Judaism and other organized religions like worshiping a Golden Calf had been around for a while. There was your basic run-of-the-mill pagan monotheism, including cults like Gnosticism, Dionysus, Neoplatonism, Mithraism, and Manichaeanism. The original origins of Hinduism began in India between 2300 B.C. and 1500 B.C. Buddhism as an organized religion got it’s kick-off around 483 B. C. The Muslim religion began back in the 7th century A. D. There certainly was a lot of competition for “Souls” back in the day.

All of mankind’s religions have this bullshit narcissistic belief that THEY are the only path to heaven/nirvana/moksha/paradise. Pick ME, Me, Me Me! We are the only way! THE ONLY TRUE PATH IS TO FOLLOW THE GOLDEN RULE! DO UNTO OTHERS AS YOU WOULD HAVE THEM DO UNTO YOU! Think about it.

The Catholic church, as it evolved probably pulled off the best magic trick of all, i.e., “Pulling a Rabbit out of a Hat” by creating this impossible story of a man dying on a cross and three days later, rising from the dead. It grew, parts of the story were re-written and edited, and became what the Sheeple believe today.

I sure am glad that I was not living with my lack of religiosity during the inquisition, which began in France in the 12th century when the government system of the Catholic Church was torturing people to death to combat religious dissent. This horrid practice continued up through medieval times (15th century).

Throughout mankind’s history, religion of some kind WAS the governing system/institution in the different cultures/societies. In some cultures, they threw you off of a cliff somewhere as a “Sacrifice”, In some cultures, they chopped of your head, or dismembered your body, burned you on a stake, hung you upside down on a cross. In some cultures, the Witch Doctor would do the evil shit to you if you were “sacrilegious” or just pissed off someone in power. It’s no wonder that our founding fathers here in the USA purposely wrote into our Constitution, the separation of “Church and State”. Some very smart dudes with a lot of common sense they were then. Now, 200 years later, all of our governmental systems are just as evil as the “Inquisitions” because of greed. We CAN change that.

The human species has evolved to where now it’s okay to kill someone just because they worship THEIR god differently. Folks, we really haven’t changed much since the time when religion also functioned as a governmental entity, killing each other because it was one religious culture and belief system against another one that didn’t have the same story/structure.

We are entering the “Age of Aquarius” and we need to get our shit together. As a species, we need to stop ALL aggression and war against each other. There is a whole lot of folk, like myself, that are awakening to the REAL TRUTH, that we no longer have to be Sheeple, that there IS something far much better for us as a species on the horizon.

So, wake up! Smell the fucking roses! Open up your mind to one very simple thing that I have been teaching for three years now. The Golden Rule. If you have no idea what that is, google it. Once you truly discover that one simple truth, practice it, let IT become your guiding light, let IT be YOUR “Magic Trick”. You WILL find Peace within, and Honesty, and Compassion, and Empathy, and Love, for others around you. Myself? All these wonderful things have replaced things that I used to suffer from, like PTSD, Anxiety, Depression, Anger, Pride, and all the other Bad Karma shit. I grew up and have lived a good portion of my life sort of believing there was a wonderful place to go after death called Heaven, and a terrible place to end up in called Hell. I really never bought in to that bullshit in a serious way (I tried). I did have a slight fear of actually dying some day, but I conquered that ridiculous fear back in February 2016 after I survived my last surgery.

In conclusion, for all of you Sheeple out there that believe the “Pulling the Rabbit out of a Hat” trick, Happy Easter! I’m sure that somewhere, some preacher is also adding a little bit of “Fire & Brimstone” to his/her Easter Sunday sermon. Now, let’s sing, “Just as I am” while the ushers pass the offertory plates/bags to pay for my 5th jet aircraft and my new vacation home in Hawaii.

By the way, Cleatus and Ellie never did catch that little Bunny Rabbit.