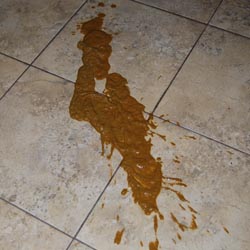 So, these three turds walk in to this bar, well, two stroll in, one floats in. Jesus is already there, playing pool and drinking a Virgin Bloody Hail Mary. The first turd is a really huge, hard as a fucking rock, turd, named Arnold, (you know, as in Schwarzenegger). Arnold waves at Jesus saying, “Hey JC, howse youse been hangin’? Jesus replies as he knocks in the number 14 Ball, “I knew it! I should have added a few more dudes to my entourage”.

Right after Arnold walked in, the second medium-sized, but smaller turd walks in. Sorta average, a little on the squishy side, the second turd preferred to be called Jeffery, (as in Cosmetologist/Fashion Designer swishy). Jeffery just waves, limp-wristedly, at Jesus.

Right behind Jeffery, flowed a large brown pool of the nastiest brown shit (excuse me, I think I’m going to puke, it smells so bad). Everyone stayed their safe distance from the third turd, a tiny little turd floating in the pool of diarrhea nicknamed “George”, as in George Burns, because he’s burned a lot of assholes before”.

“What have you three turds been up to lately?”, Jesus asked. Arnold is the first turd to respond, “Well, you remember that Little Miss Muffet and her fucking Tuffet? I tore her a new asshole this morning, I think she still might be bleeding a little, and I KNOW she’s going to have to sit down gently on that fucking Tuffet for at least a week”.

“How about you, Jeffery? What was your day like?”, Jesus asked. As Jeffery begins to answer, JC has just accidentally hit the eight-ball in……..”God Dam it, I hate scratching, that’s the third time I’ve scratched in three days” Jesus yells. So, after that little outburst, (JC was known to get a little angry once in a while, like that time he chased a bunch of money-grubbing zionists out of the temple”.

“Well”, (Jeffery continues), “Mary, Mary, Quite Contrary was out in the back yard this morning, you know, seeing how her garden was growing (I think someone asked her), and she dropped her fucking pants right there in the Cockleshell patch next to where the Silver Bells were hanging. Anyway, she didn’t even grunt once”, Arnold cuts in saying, “Shit! I had Little Miss Muffet grunting so much, she started to quiver, sweat and turn blue in the face”, Jeffery continues after the slight interruption, “I slid out of her ass, so gently, so calmly, but right at the jumping off point, Mary sphictered off a little bit. Four flushes and lots and lots of toilet paper……….Ohhhh, and by the way, did I say painless yet?” as Jeffery smiled at Arnold.

Now George finally catching up with Arnold and Jeffery. He swims up to the bar in that nasty brown pool of diarrhea murmuring almost unintelligibly, “I got everybody beat on this one. Remember Alice? (as in Wonderland) her roomie was pissed at her for some reason and mixed some Ex-lax in with Alice’s cookie dough that she kept in the refrigerator. She ate two pounds of that cookie dough time-bomb last night…..Need I say more? There I was, one tiny little turd floating in this brown pool, I came out of her asshole like a wild banshee and the rest of me sprayed all over the fucking place, on the toilet seat, her pajamas, on the wall, and all over the floor, you might say, the shit hit the fan. Everyone in the bar including Jesus, laughed.

I know, a warped sense of humor some might say. Sometimes you have to take the Ugly & Bad along with the good.

Thought for the day:

It’s as if humanity closed their eyes for just a second, as we went from “Sticks & Stones, broke a lot of bones”, to Nuclear Weapons. – Dr. T. C. Saxe, DD,