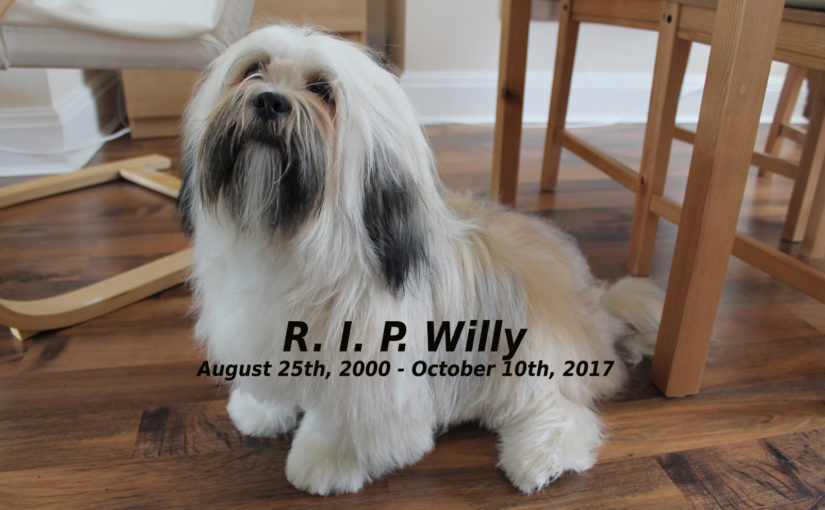 “Chat” Conversation in an online poker room about three years ago

Me: “She probably has “Dial-Up”

Me: My dog Willy died this morning

JanetReno1: Ohhhhhh, how sorry I am for you

CanuckLver: What kind of dog was he?

Me: Willy was 17 years old, one of those Lhasa Apso’s, had him since he was a puppy

JanetReno1: Are you bullshitting us? I don’t think dogs live that long

CanuckLver: Some breeds live a long time. My grandmother had one of those Lhasa’s, and she lived for 14 years. I guess 17 might be the record, ehh?

Me: Willy and I were inseparable. Ever since he was a puppy, he rode in the car with me and went everywhere I went

JanetReno1: My heart goes out to you. How big a dog was he?

Me: Not quite a lap dog, but he was small enough to get comfortable on your lap. He weighed about 25 pounds when the Vet weighed him this afternoon

JudyMN72: Whaaa? Did you have an autopsy done?

Me: Dr. Gulbransen, the Veterinarian had been seeing Willy for darn near 10 years. One time, along time ago, he asked if I would be interested in donating Willy’s body to science, i. e., he wanted to study Willy’s brain as part of a University grant he had to study aging in dogs, and specifically, why breeds like Lhasa’s live so long

JudyMN72: So, you donated Willy’s body, and the Vet cut him up to look at his brain

Me: Yeah, it was cheaper than a doggie funeral

CanuckLver: So, you have us all in suspense now…..

Me: So, anyway, this morning I had to stop at my dealers place to pick up some weed. It was my first time to see where/how he lived. Prior purchases were always done at the Fry’s parking lot on 91st and Olive

CanuckLver: So what’s that gotta do with your dog dying, c’mon…..

Me: My dealer, “Hay-Zeus” (Jesus) raised Pit Bulls, and Willy got outa my truck and walked with me up to the front door. 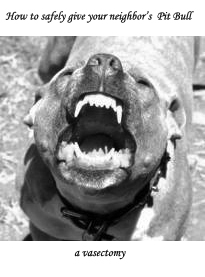 Willy could hear the barking out in the backyard as we walked up the walkway to the front door.

Me: Hay-Zeus opened the door, I asked if it was OK to bring Willy in, and he said sure, don’t worry, my dogs are polite……and trained well. I bought a couple of ounces, and Hay-Zeus took us out to the backyard to meet his dogs.

JudyMN72: Shit! I think I can see where this is going. Did his Pit Bulls kill Willy?

JudyMN72: So what happened? You said he didn’t die of old age

Me: Well, it’s really sorta unusual, the way Willy died. “Sally”, one of Hay-Zeus’s female Pit Bulls was in heat.

CanuckLver: LOL. I can see where it’s going now….

Me: Although Willy was 17 years old, sorta senile, and terribly arthritic, blind in one eye, he could still get a woody. It happened so quick, that all Hay-Zeus and I could do was stand there and watch.

Me: Anyway, for a small dog, Willy had a big dick. His little red rocket was huge. He and Sally hooked up immediately. She “acted” surprised, (probably at the size of Willy’s pecker), and started spinning around and around and around, almost like chasing her tail. I think she was trying to shake Willy off. They were stuck.

Me: Anyway, they spun in a circle so fast, still “attached”, that all the blood had drained from Willy’s brain for a minute. As soon as Hay-Zeus introduced the two dogs to the hose, they were free and stopped in their tracks. For Willy, he stopped DEAD in his tracks, cause the Vet said the flowing of the blood back into the brain caused his stroke. The stroke was a major one. Willy just looked up at me, closed his eyes, and dropped dead. Yes, Willy was a good friend. I’m glad he died with his boots on. Wonder what the puppies are going to look like. I think the Vet cut Willy’s dick off and put it in a jar of formaldehyde. Odd?