First of all, “Punishment” is what it says, and is not meant to be a device of rehabilitation, but a device or method used to deter a crime, or a thought or process that is in conflict with your own. Spanking children is not rehabilitation, it’s punishment, pure and simple.

Execution by any method, in effect, instantly ending a person’s life, is meant to be a deterrent, although if you ask some wild-eyed homicidal maniac if the last execution in Texas deterred him or not, I suspect that they will laugh in your face.

“Cruel and Unusual” punishment is in the mind of the beholder, i.e., what seems cruel and unusual to you may not be too bad for your neighbor down the street, who’s dogs have been shitting all over your front yard. Society and progress, progress and evolution.

Different strokes for different folks, some governments chop your head off, some use poison gas, some use drugs in an IV stuck in your arm. Some will hang you so brutally that when you drop, and hit the end of your rope, 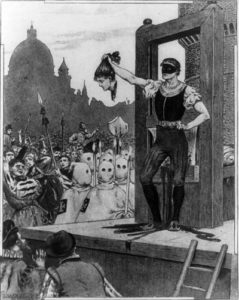 the force is such that it rips your fucking head off. Brutal, but still not a real deterrent in society. Bullets. Have I left any out? Tell me. Almost forgot, “Guillotine”.

Secondly, incarceration without rehabilitation, is exactly what it is, punishment. After so many years, you do recognize it as a life style change for sure. Even though the handlers may assist the truly evil by segregating them from the “normal” population, like a Dahmer type, they still end up experiencing the pain and anguish of a violent death. Well deserved? Yes. Soon enough? No.

Backhoe equal deep hole. This is a form of punishment, NOT meant to rehabilitate. For sure an experiment in deterrence.

Note: Set this form of punishment aside for those really evil crimes, that have been solidly proven by DNA or solid eye witnesses, i.e., We do not want to use this on the “Really? No Guilty?”, “Whoops! Sorry, we made a mistake” types that are exonerated after 20 years.

Having said that, if the person deserves the “Hole”, lower that person into the hole, gently, with a rope. When you are pulling the rope back up, and you feel the weight of the condemned on the end of the rope not wanting to let go, yell down the hole, “We are now going to raise the rope up 29 feet, when we reach that point, we are going to cut the rope, giving you 29 feet of rope in a thirty foot hole, and a quick 29 foot fall until you hit the bottom and break your neck, back, both legs, and arm? Anyway, you get the picture”.

So, wise man that you are,  you elect to let go of the rope when you reach the bottom of the hole. How long can a person’s body go on before it dies of natural causes? Like starvation, thirst, etceteras. 2 weeks? A month? How long before the mind tells the body to stuff enough dirt in your mouth to expatriate your life from your body?

Now, you are the next condemned person to be politely lowered into the hole. At the bottom, you discover the first dude…..he died two months ago but there’s still some meat left on those bones. What does the second dude do? He lives a little longer, or at least until he has run out of flesh and died of natural causes.

Eventually, you are lowering more evil people down the hole while other evil dudes are still alive. Imagine the battles between two or more live dudes, fighting over dead meat.

Eventually, you repeat this over and over again until the hole is five feet from filled, filled with approximately 75 to 80 bodies. Maybe it took a few years or more to fill the hole. They’ve all died, piling up on each other. Throw some dirt on top, i.e., fill in the hole and plant a Xmas tree. Would that be a deterrent? Maybe, maybe not.

Make the hole as deep as you want, a thousand feet? Nahhhhhhh. The condemned would run out of air too quickly, and your Xmas tree farm would be a lot smaller. I think thirty feet is good, after all, this is supposed to be PUNISHMENT. How many holes like this can you get in one acre? Think about it.

A few last thoughts. The truly insane, however horrible the crime, should be institutionalized, like in a mental facility, not a prison, although there is not much difference between the two. Rehabilitation, should be giving that person the tools to be a productive part of society when they are released, i.e, education, training, and motivation.

Inexpensive Punishment? Imagine the horror as the judge tells you your sentence, “Having been found that the very nature of your crime exceeds the level of “Normal”, this court condemns you to the “Hole”, “Court is dismissed”, in other words, the judge sentenced you to “Life, and Death’, to die of natural causes, over a less than rapid period of time.

A city or municipality could earn a steady income from all the tourists who want to see the “Hole” in the town square, covered with a steel grate. The condemned benefit from all the stuff that the tourists would throw in the hole, “Mommy, I think I hear a scream” as the child laughs, and drops a pack of cigarettes through the grate.