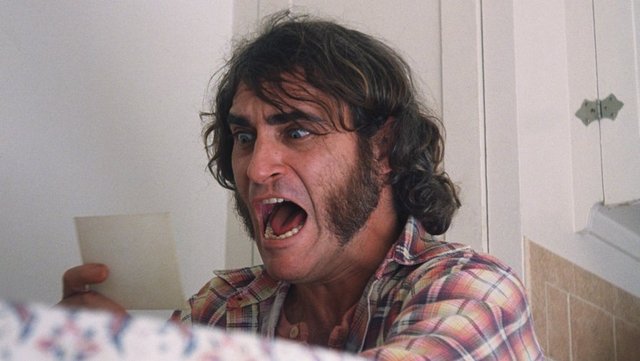 This is NOT a movie review. It is my description of a phenomenon that has occurred to me many, many times while watching a movie on TV, while stoned. The phenomenon has been resolved tonight, and I am very much encouraged to go out and buy this movie, (or to buy it online).

Now, in a California beach community, private detective Larry “Doc” Sportello (Joaquin Phoenix) tends to work his cases through a smoky haze of marijuana. One day, Shasta, a former lover, arrives out of the blue to plead for Doc’s help; it seems that Shasta’s current beau, rich real-estate tycoon Mickey Wolfmann, has a wife who may be plotting to commit him to a mental hospital. When Mickey and Shasta both disappear, Doc navigates a psychedelic world of surfers, stoners and cops to solve the case.

From the beginning of the movie INHERENT VICE, a movie released in 2014, I noticed that the channel, VICELAND, not known for censoring their stuff, censored this movie to the extreme.

There were the occasional “blurred” out parts of the video image thingies”,  hard at work, blocking out things that you would “think” would not be naughty enough to blur out, like a brand name on some product, or like whatever image on a particular tie hanging in the closet, which turned out IT was being censored because of a cartoonish image of a naked woman painted on it.

Now, the real tits and ass, which is REALLY blurred out much later, like 45-50 minutes into the movie, the audio sounded as if my speakers on my TV were broken or something, i.e., all the moaning and groaning were cut out (almost a Silent Movie, but not quite)……Let’s be honest,  slight woodie during that scene as I am trying to mentally pixel the crotch and boobies back into the scene, and at the same, trying to figure out if my ears were OK, or if the TV sound was fucked up or not…….

For a minute or two, I’m thinking…..”I must be getting old, or this is weird pot, cause I can’t understand one fucking moan, i.e., or word they are saying right now”. In the last couple of acts, there wasn’t any more nudity or X-Rated images to blur out, but it seems as if the audio censoring actually increased.

Now. I thought my ears, i.e., my hearing….had been effected by the strain I was smoking, and this is a good hour or so into the movie. It slowly started getting harder and harder to understand what the actors were saying, now, I thought, this is really good ganja tonight, “It’s like a fucking foreign film to me!!”.

Then it hit me right after I said that, “that’s why it sounds so weird”……They not only are censoring the actual visual portion of the film with the blurry thingies, they censored (cut) the spoken word (dialogue) as well”, so much so, that by time the main character “Doc” was getting laid on his couch, it was full-on but blurred out bare titties, and full-on but blurred out, hairy bush.

Right after the walking on the beach scene, in the scene when “Doc” is talking to the Federal Prosecutor or lawyer lady it sounded entirely space-caddetti because of so many X-rated words of color now being used in the dialogue.

Now, I think, “It’s not the pot”……”I have to buy this movie so I can see it uncensored”, which makes sense, even though I recorded this on my Direct TV box thing, “I can’t watch this again until I buy the movie”, because I still won’t understand the copy that I recorded tonight…….

Now, that makes me wonder…….”Over the years, for many years, how many other times in the past did this happen to me while watching a movie on TV?”, i.e., the audio being censored, i.e., censoring not just the little bit naughty, as well as the really, really naughty X-rated words.

Now, when I think again, “It HAS happened before, many times before”, when I would be watching a censored movie and never realize that they were cutting words out (censoring) thinking, and blaming the phenomenon  on the pot.

Over the years, there’s been a whole lot of movies that I watched, and blamed the pot for my not thoroughly enjoying the film. I also never had an afterthought like tonight, encouraging me to buy the DVD, i.e., I never rented a video tape or DVD of something broadcast on TV in order to figure out what was going on, really. NOT before tonight.

Expurgation, also known as bowdlerization, is a form of censorship which involves purging anything deemed noxious or offensive from an artistic work, or other type of writing or media either by “bleeping” or “editing out”, i.e., cutting, and replacing the offensive word with a substitute, non-offensive string of words, or singular word.

For those of you that have enjoyed reading my posts and pages, and would like to make a small donation to my efforts in helping others in need, I have now set up a PayPal account for you to contribute $1 or whatever you feel it’s worth to you. Your donation is 100% tax deductible.