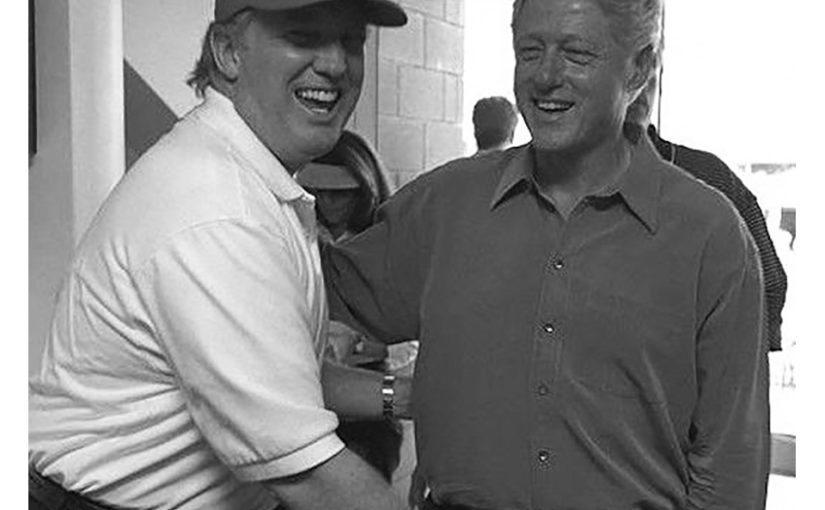 I rewrote my Clinton/Trump/Motorcycle Cop joke last night, and felt it deserved it’s very own post today. So here goes:

Bill Clinton and Donald Trump happen to sneak away from their respective Secret Service teams at the annual Hooter’s Convention and head to McDonalds. After leaving with their food, they are cruising down Hollywood Boulevard when a Los Angeles Police Department Motorcycle Cop happens to make a right turn at a corner, and routinely follows the vehicle that Bill is driving.

For a few blocks, the officer follows and notices that the suspect driver is making strange jerking movements, and is momentarily encroaching on the opposing lane of traffic. Sound of siren, as the officer points to the curb.

From behind, as the officer and the vehicle in question come to a stop, from the camera’s point of view, it is apparent that the driver has a passenger, as Donald has popped up from whatever he was doing and the camera sees him as he wipes his chin with a fancy embroidered handkerchief. Bill rolls down his window, as the officer walks up to the drivers side of the suspect vehicle.

Clinton to Officer:  “I know what this probably looked like when you pulled me over officer”, (as Donald is still wiping something off his chin). “Donald was just reaching for a French Fry that he dropped on the floor”.

Clinton whispers to Trump: “Shut the fuck up, Donny”.

Clinton to Officer: “Officer, what did I do?

Officer to Clinton: “You were driving rather erratically back there, swerving, and you actually did cross over for a moment into opposing lane of traffic. May I respectfully suggest Mr. President, that you have been driving while impaired”.

Clinton to Officer: “Driving while impaired? I haven’t had a drop to drink all day, Officer”

Clinton to Trump: “Did you swallow?”

Trump to Clinton: “Of course. I always swallow, wiped off my chin too!”

Clinton to Officer: “I’m afraid the evidence is gone, Officer”.

Officer to Clinton: “Mr. President, please put the cheeseburger down, zip up your pants, and get out of the vehicle”.