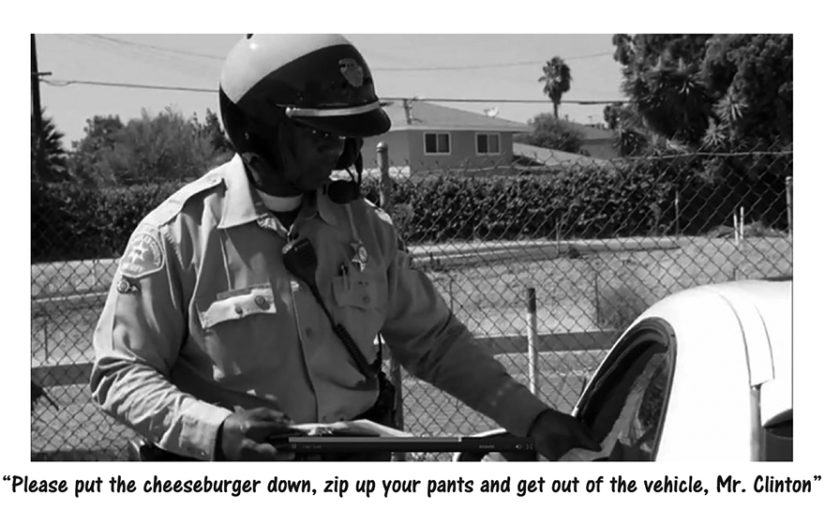 First memory of eating (well, sucking on really) a cookie was when I was around 2 1/2, what in reality, was a snack for dogs, a dog biscuit. Shaped like a tiny bone, and hard as a rock, all you could really do as a 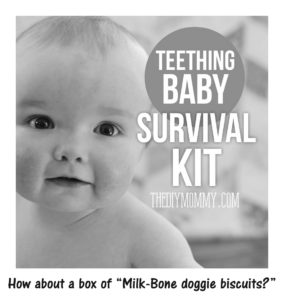 little kid with tiny teeth, was to suck on it. I think my mother meant well, because I did have baby teeth still coming in on a regular basis, and I suppose it was soothing to the gums.

I would suck on that “cookie” until one end got softer and softer, spilling this light brown dog biscuit liquid shit out of my mouth, sending it droolingly down my chin and onto my baby t-shirt. It sort of gave off a Peanut Butterish flavor in your mouth.  When you are a toddler, you have absolutely no idea that your “cookie” that you are sucking on, is a snack most people normally give to their dogs. As I said, my “cookie” had a distinctly different kind of peanut butter taste that I remember to this day.

I remember I would suck on that thing, taking occasional whacks at it with what baby teeth I DID have. Happy little kid I was every time my mother gave me one of those “cookies”. I only remember Mother giving me those dog biscuits for about a year. After that, as I got older, whenever I asked Mom for a cookie, she would give me a Nabisco Fig Newton, or once in a while, an Oreo cookie.

I didn’t relate that bone-shaped cookie to a dog snack until one day when I was about five, while grocery shopping with Mom. Walking down the pet food aisle. I just happen to spot in the dog snack section, my old, sort of peanut butter flavored favorite, the Milk-Bone branded bone-shaped dog biscuits. I didn’t say anything that day, and I didn’t bring up the subject “Dog Biscuit” with Mom until about a year later (when I was six).

Sure enough, when I eventually did think of bringing up the subject, I was giving my dog Trixi 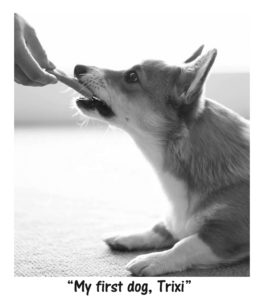 a Milk-Bone dog Biscuit, a “Cleans Teeth…..Freshens Breath” Mini’s  Peanut Butter flavored,  dog biscuit. Later that day, “Mom…….Isn’t this the same “cookie” you used to give me when I was little?”. Hahahahaha.

Peanut Butter taste? Not really. Peanut Butter breath? Yes, if you were a dog. OK, it probably did help me with my teething issues when I was a young, barely a toddler, child. As a parent did I ever give one of my children a fucking dog biscuit? No. Hahahahaha. Shows to go ya. I remember Trixi loved them, the dog biscuit that is.

P.S. I have this to say after hearing President Obama’s speech tonight to the Congressional Black Caucus (CBC) annual awards dinner. The following was inspired when the President was speaking about voting rights, and getting out the vote.

“If you are stupid enough to think that you are still a Slave, vote for Donald Trump. Voting for Hillary  Clinton IS telling your friends, relatives, and neighbors that you are NOT a Slave“. – T. C. Saxe 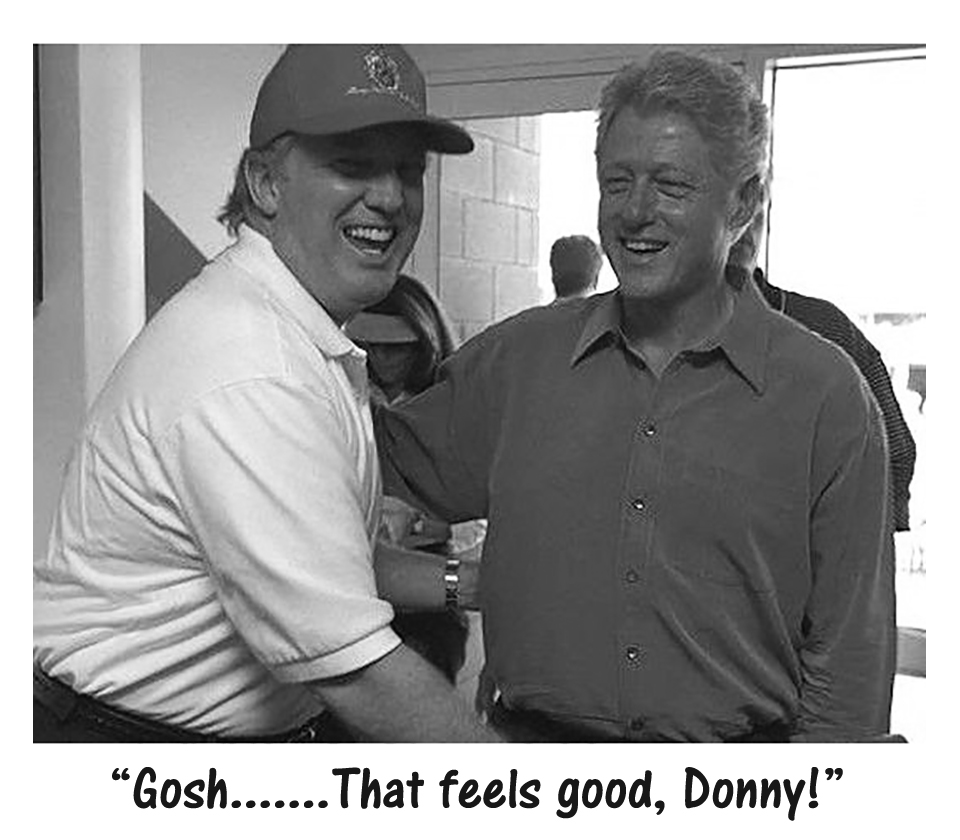 Joke for the day (I’ve told this one before, I just refined it), in a new “Joke Category” called, “Picture this”.

Picture this.  Bill Clinton and Donald Trump happen to sneak away from their respective Secret Service teams at the annual Hooter’s Convention and head to McDonalds. After leaving with their food, they are cruising down Hollywood Boulevard when a Los Angeles Police Department Motorcycle Cop happens to make a right turn at a corner, and routinely follows the vehicle that Bill is driving.

For a few blocks, the officer follows and notices that the suspect driver is making strange jerking movements, and is momentarily encroaching on the opposing lane of traffic. Sound of siren, as the officer points to the curb.

From behind, as the officer and the vehicle in question come to a stop, from the camera’s point of view, it is apparent that the driver has a passenger, as Donald has popped up from whatever he was doing and the camera sees him as he wipes his chin with a fancy embroidered handkerchief. Bill rolls down his window, as the officer walks up to the drivers side of the suspect vehicle. 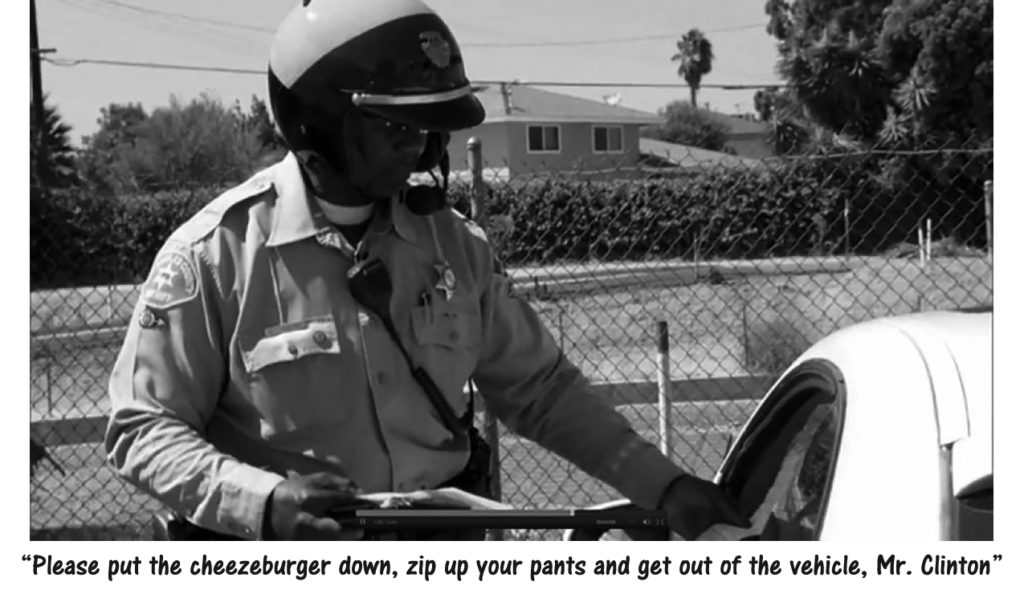 Clinton to Officer:  “I know what this probably looked like when you pulled me over officer”, (as Donald is still wiping something off his chin). “Donald was just reaching for a French Fry that he dropped on the floor”.

Clinton whispers to Trump: “Shut the fuck up, Donny”.

Clinton to Officer: “Officer, what did I do?

Officer to Clinton: “You were driving rather erratically back there, swerving, and you actually did cross over for a moment into opposing lane of traffic. May I respectfully suggest Mr. President, that you have been driving while impaired”.

Clinton to Officer: “Driving while impaired? I haven’t had a drop to drink all day, Officer”

Clinton to Trump: “Did you swallow?”

Trump to Clinton: “Of course. I always swallow, wiped off my chin too!”

Clinton to Officer: “I’m afraid the evidence is gone, Officer”.

Officer to Clinton: “Mr. President, please put the cheeseburger down, zip up your pants, and get out of the vehicle”.