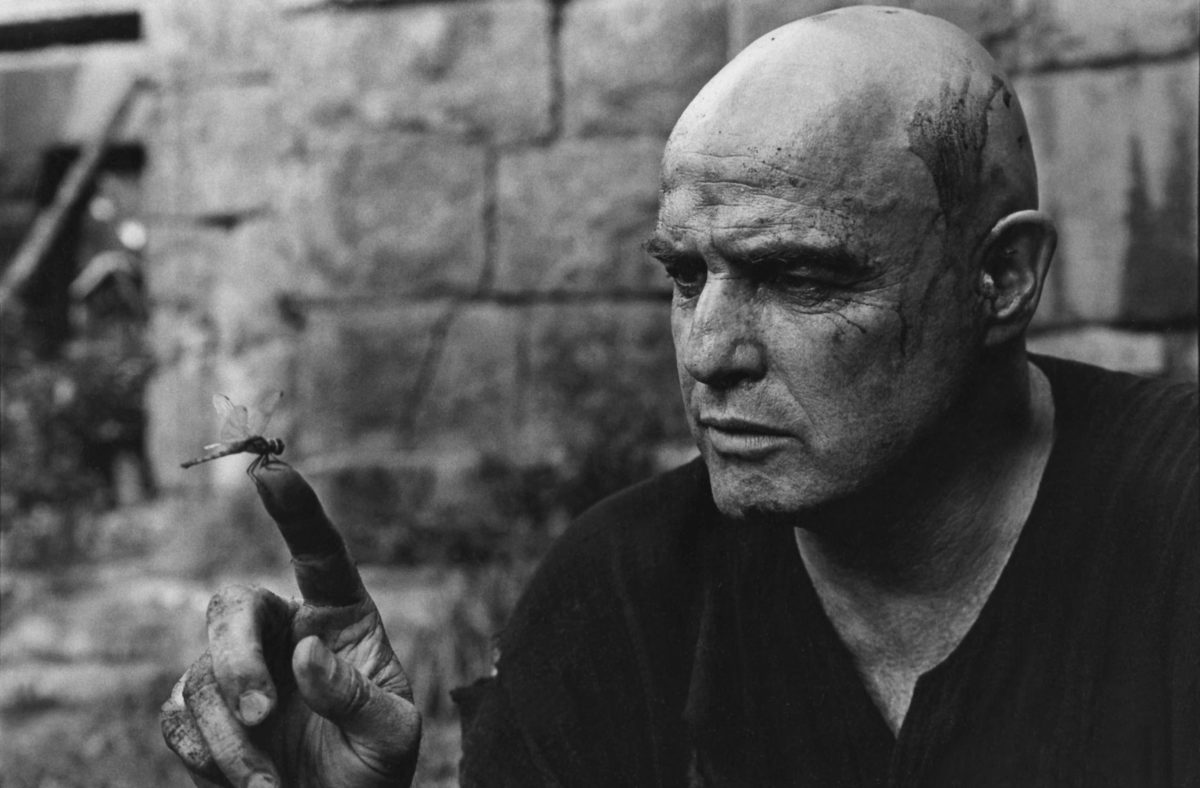 Three people a day are shot and killed by law enforcement. Every day. That’s 1,095 people a year. Many are bad dudes deserving every bullet piercing their bodies, and some, unfortunately are just bad shootings on the part of the police. Anyone with an ounce of common sense knows that.

As I am writing this, the horror in Dallas is unfolding. The crowd is peacefully protesting the police shootings in Louisiana and Minnesota.  People of all colors are peacefully marching down the street, shouting “Hands Up! Don’t Shoot!” ” Black Lives Matter!” Yes, some were “Peacefully” yelling, “Kill the Pigs!”

All of a sudden, someone opens fire with a semi-automatic assault style rifle. Targeting the police,  the manic killed five officers and wounded several others. It used to be a very long time ago, that guns were a necessary tool used for hunting wild game, like deer, buffalo, pheasants, duck, etceteras. Now it seems like men are using guns as some sort of extension of their penis, or maybe to pretend that their dick is larger than it really is.

I just saw an excerpt of a show wherein a dude with a lot of tattoos was daring anybody to try to take his AR-15 away. The old “Pry it from my cold dead hands” routine. How fucking stupid is that? His target is a poor defenseless watermelon, 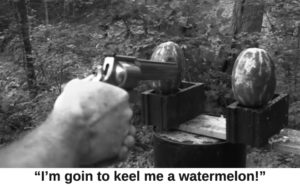 and he’s yelling at this melon as if it was some hatred filled enemy. Give me a break. Give this dude a psych evaluation.

What’s wrong with America’s gun laws is in the gun culture itself. The very fabric of our society is so brainwashed with this bizarre and abnormal interpretation of the 2nd amendment that our founding fathers are not only rolling over in their graves, their rolling over, facing hell and saying, “Fuck this Shit!”. I have written before about my own membership in the NRA (National Rifle Association) in the mid-1950’s. I was taught gun safety and proper use, not how to threaten someone else who believed differently than I.

What makes you think that a weapon originally invented for war, i.e., for use by soldiers, is what our founding fathers meant for us to own and brandish? We may as well pass a law making fully-automatic weapons legal. The dude with more thirty round clips in his truck than you have, wins. It is absolutely pathetic  to think that the gun rights advocates are serious when they say, “peel it from my cold dead hands”. 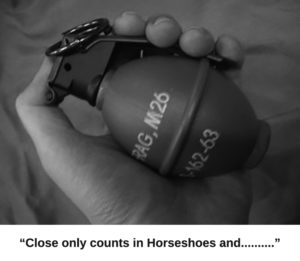 Let’s “Open Carry” hand grenades and bazookas. If someone pushes in front of you in a line at a movie theater, shove a hand grenade in his mouth and pull the pin. If some trucker hauling a load of watermelons cuts you off on the I-10 Freeway heading to Los Angeles, open up the sunroof on your Honda Accord and let your wife take that dude out as she stands up and pulls the trigger on her bazooka.

I really think we need serious attitude adjustments across the board. It might sound crazy to some people, but let’s put some serious thought into requiring mandatory psychiatric evaluations prior to gun sales and ownership. Reward citizens for turning in their unnecessary firearms. Big rewards, like a new Tesla, or season tickets to the Dodgers.

In the inner cities and ghettos, reward the compliant citizens with  decent housing, jobs and lottery tickets and watermelons, (Yes, there would be a lot more melons available if there were no guns). 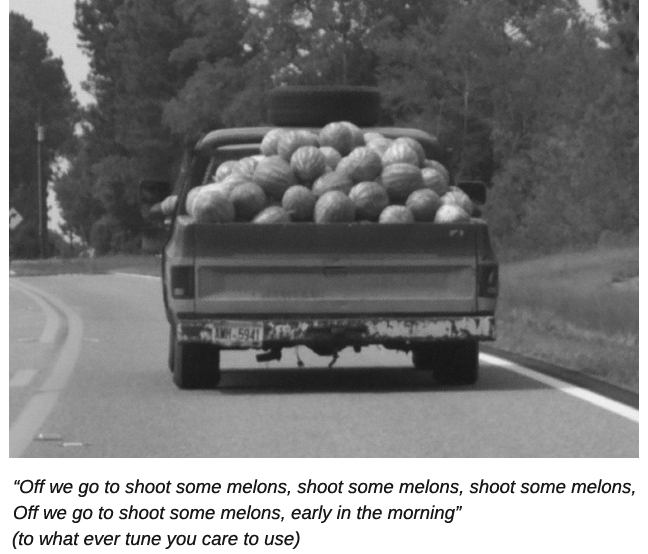 Seriously folks, American culture as a whole, need serious re-education. I’m pretty sure that the professionals can come up with a fairly simple test to find out if you are inherently homicidal, suicidal, or just too fucking crazy to own a gun.

The tests should be given verbally and monitored in real time by the person conducting the test. Take a nationwide poll. How many people with average or above average IQ’s have the same attitude about guns in general as that dude attacking that watermelon with his AR-15?  Yes, I smelt it cause I dealt it. 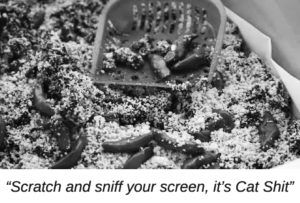 If I have offended any gun-toting strangers, friends, or relatives, please accept my sincere belief in free speech as I’m not going to apologize to you. All this killing stinks. Much worse than my farts or cat shit. 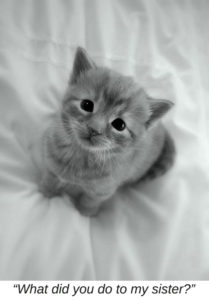 he was an Iraq war veteran with a clean civilian sheet and a friend on the force, they found out enough about his character to tell him, “No thanks”. Did he torture & kill kittens when he was a kid? We’ll never know.

Do all law enforcement agencies interview and/or test candidates the same way? Apparently not! If during his first interview, that veteran starts reminiscing his kill ratio, you might want to put him on a watch list, not a Swat Team. We have too many people who have come home from war with conditions that clearly should preclude them from “Serving & Protecting” us as officers of the law. They need help, not a gun.

When you watch people being executed on our streets by law enforcement officers for no good reasons, you have to wonder, what the hell is wrong with us as a society of supposedly intelligent people? Don’t use the outhouse if Uncle Luke just put it down-range. Don’t pick your nose and scratch your butt during your interview to be a police officer or a bank president.

Don’t sit there and brag about all the flying body parts when your bomb hit the target. lf you have spent your life in and out of sanity, and you don’t realize it, we all care about you and need to know where your heads at before we give you a gun.

If what you shared with the officer during your interview was full of empathy and understanding for the innocents suffering from war, you just might be a good candidate for law enforcement. 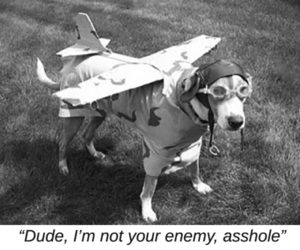 If you throw a puppy in the air and shoot it, and your asshole sergeant laughs while filming it, please stay in Afghanistan, both of you. Don’t ever come home. If you do, don’t come to my city, and please, please, check yourself in to the nearest hospital for psychiatric care.

On a lighter note, if it’s not one thing, it’s an Udder. Funny memory from my early teenage years. I think I was 13 or 14 at the time. I shared this incident involving my cousin Billy Bob, with our cousin Vicki the other day and got a laugh and permission to use her name.

Billy Bob was a year older than I, so I was a follower not a leader. Billy says to me, “You want to see something, snicker, snicker?” Of course I did. So we walked down and across the street a few houses to where our cousin Vicki lived. It was dark out, early evening. He grabbed a big extension ladder that was by the garage, and placed it against the house right underneath what I soon discovered was Cousin Vicki’s bedroom window.

As we reached the top of the ladder, I was giggling a little, and in walked my cousin Vicki who began to take off her clothes. When she unhooked her bra and let loose her boobies, I almost fell off the ladder. 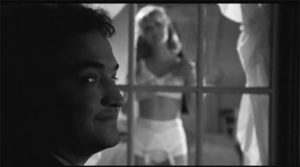 Billy Bob and I stared at this magnificently beautiful young woman, (she was two years older than I?) for about three minutes more. Was I excited? Yes. Aroused? No. Was Billy Bob aroused?  Ask him, it was his idea.

We climbed back down the ladder, put it back by the garage, and walked back to his house. Uncle Rodger was a Fireman, so I guess my cousin knew that he was at work that night and wouldn’t be coming around the corner to catch us on the ladder outside his daughter’s bedroom window. 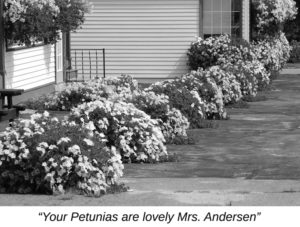 And on a much lighter note, if you fart in the wind, will it kill your neighbor’s Petunias? Just wondering. There are some flowers downwind from me right now.

Why does cat shit smell so bad? How about MMA fights with baseball bats. Are you a bathtub bubble biter?