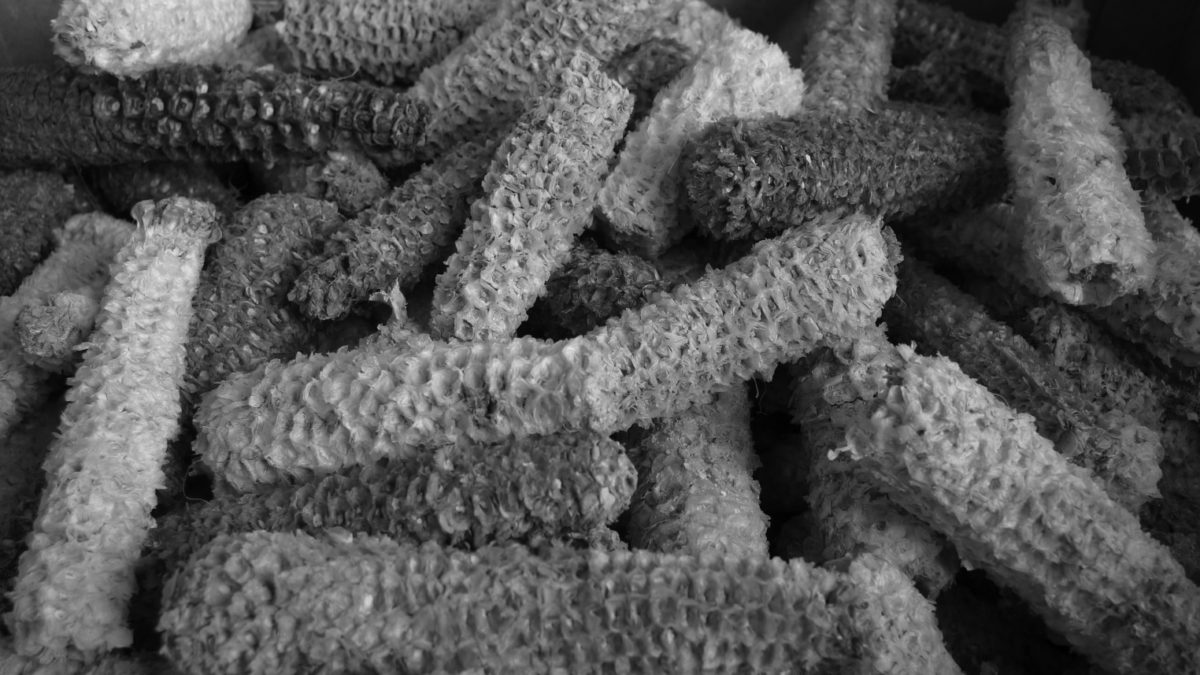 What do you do? Do you use your fist or elbow to break the glass?  Do you run back in your flaming apartment to grab that hammer you should have left by the door? It really doesn’t make sense to have to “Break Glass Before Using” 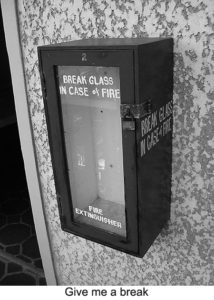 As much sense as keeping a bag of corncobs by your front door or a couple of bottles of barbecue lighter fluid (in case of a fire). It also doesn’t make any sense to have to break glass in order to get to toilet paper. It does make sense to keep a hammer and slippers by the door, that is if you happen to have a fire extinguisher outside hanging on the exterior wall.

It’s perfectly okay if what people are breaking glass for is corncobs however. Made me think of the outhouse at Uncle Chuck’s cabin. Uncle Chuck built this corncob display thing hanging on the wall.  It had a plastic window, and a little hammer affixed to the case. It was a gimmick like the ”Talking Fish” or deer head. If you were sitting in my Uncle Chuck’s outhouse at his cabin taking a crap, you most likely were staring at the corncob box on the wall directly in front of where you are sitting (left hole when you are walk in, right wall as you are sitting).

This rectangular box with the clear plastic window, had three corncobs inside.  Two red cobs, and one white cob with the white one in the middle between the two red ones. If you grew up in a farming community, you would know that these particular corn cobs were fairly soft to the touch, stiff and fuzzy, and great for wiping your ass if you happen to be working the south forty.

In the early days, every outhouse had a bucket full of corncobs.  Farmers didn’t drive back to their house to take a crap though. They carried several “Red”, and a few “White” corn cobs in their tractors’ toolbox. When I found this out, I was curious why farmers didn’t carry a roll of toilet paper in the toolbox?

For Uncle Chuck, the idea or thought of utilizing corncobs after defecating was simply a joke based on historical reality. In reality, if you were out of toilet paper in this particular outhouse, and there were no Sears & Roebucks catalogs or other reading materials handy, you dare not break the glass (well, you couldn’t really, it was plastic). In my case, one time I simply used my underwear and threw them down the hole.

So In addition to the miniature hammer affixed to the beautiful wooden box, there was a small gold-plated sign above the hammer and below the window. The engraving on the plaque said, “Break glass in case of an Emergency”. Below that were the words, “Use the first Red cob, then use the White Cob to see if you need the second Red cob”. Third line of the beautifully engraved text read, “If it’s a messy one, use your finger before you use the first corncob”.

There was a home-made sign on the left wall that said, “We do not recycle the corncobs”. Another sign on the right wall, wasn’t a sign really. It was one of those colorful embroidery things that Auntie Wilma made. “Needlepoint”. That’s’ what I think it’s called. This beautiful needlepoint work said, “Flush Twice for Large Turds”. Now how funny was that! Auntie Wilma made that. 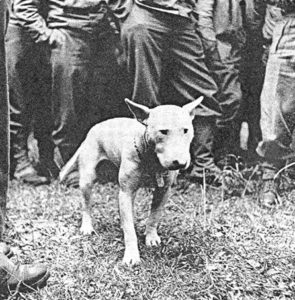 Patton’s dog “Willie”. That was my favorite. It was mounted on the back wall across from the doorway at “Adult Male” pee height, i.e., six feet from the floor.  Uncle Chuck was an Army officer in World War Two, commanding a tank battalion for Patton.

This was not your average outhouse. Uncle Chuck had run electricity to it from the  cabin, so there not only was a light fixture (not quite a chandelier), he also had installed a small electric heater. You could tell that a lot of craftsmanship and pride had gone into the construction of this fully insulated and wallpapered outhouse. Everyone knows that Uncle Chuck (who’s really a great-uncle on my mother’s side), is a fairly funny dude. His PTSD issues were helped with comedy, believe it or not. 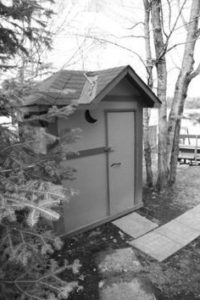 Not funny is when Uncle Chuck sees the small bit of shit that someone had smeared on the “glass” of his corncob display. Although my Uncle Chuck was a funny guy, he didn’t think it was funny that someone was vandalizing his outhouse. We were playing Monopoly this particular early Saturday evening, the adults were playing Canasta.

Uncle Chuck had just come in from going to the outhouse. “Who’s the last person to use the facilities?”. Of course Auntie Erma raises her hand. Three other people simultaneously raised their hands also. No one kept track of the outhouse visits.

No matter who was first, next, or last, we didn’t write it on a chalkboard and erase it when we were finished using the facilities.  Not a bad idea when there are fifteen men, women and children spending their 4th of July weekend at Uncle Chuck’s cabin. I see the door opening as cousin Susie walks out, and I cheerfully say, “My turn!”.

In a calm, controlled voice, Uncle Chuck says to my mom, “Get all the kids in here. Right now!” Now he has everyone’s attention as he holds up the corncob display box, moving it in a right to left, left to right slow-motion manner as he says, “See that brown streak on the window? That’s shit! How do I know it’s shit?  I smelled it!” I momentarily tried to picture that in my mind.

There were two holes. Both had a toilet seat that you could lift to pee. The main platform board was upholstered in red tufted Naugahyde. You could never really know which seat Uncle Chuck preferred until he was standing there, showing us the corncob box. Looking at the two seats as you walked in, the hole on the left was facing the wall on the right, not the door, which was on the left if you were sitting down, (this was a double-wide outhouse with a single door). That had to be Uncle Chucks favorite seat because if you have positioned your butt over the left hole and was looking straight ahead, you would be admiring the genius wit behind the corncob box.

Picturing that in my mind, I envisioned Uncle Chuck sitting there for a moment, seeing something, puts his glasses on and leans forward, almost putting his nose in the brown stuff. “I smelled it” means you practically have to stick your nose in it or your finger to your nose in order to smell it.

No one was ever caught or blamed (l thought it was Mikey). Years later, Mom told me that she thought it was Uncle Boots that had jealously spread a little bit of shit on the front glass of the corncob box. Boots and his silent game of jealousy is a story in itself. Boots was younger than Uncle Chuck by three or four years. Growing up as brothers, there were some sibling rivalries all their lives. Uncle Chuck was more successful in sports, and life in general than Uncle Boots, so Mom had pretty much figured out that the streak of shit smeared on the window of the corn cob box was probably from Uncle Boots.

The moral of the story is, in case of an emergency, place a hammer by the door, and place a bucket of corncobs in your outhouse.

Finally, one last thought about Fire Extinguishers and Corncobs. The father of one of my son’s  neighbors, Ray, and I were talking tonight, having a beer, 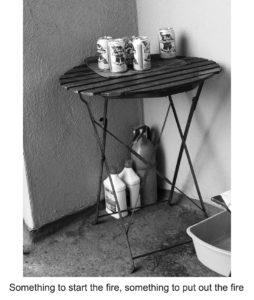 when I noticed that next to their fire extinguisher sitting on their patio floor (see photo, courtesy of Ray F.), was two plastic bottles of Barbecue Lighter Fluid. Instantly

I thought, “Gee, if your apartment is in flames, you’ll want to use the tall red thing. If your obnoxious asshole of a neighbor’s apartment is on fire, hand the prick the two bottles of barbecue lighting fluid………….and  the grocery bag full of corncobs that you kept by your front door in case of emergencies..