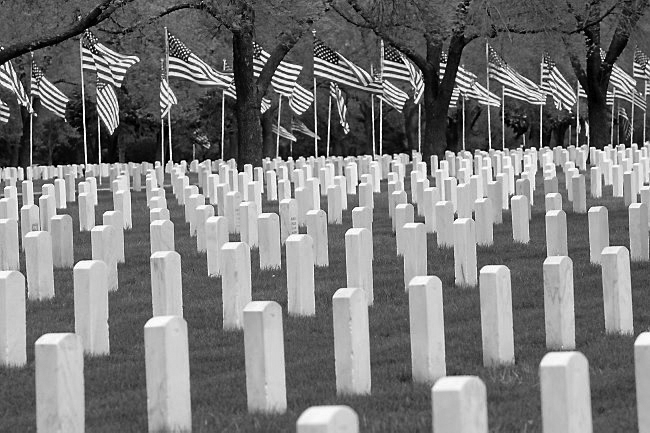 This was originally posted Memorial Day 2016, and I re-post it every year.

We place flags on graves and remember the “Brave”  who have given their lives for their country. In other words, you are NOT going to be “Memorialized” until you’re dead. Of course we appreciate our military men & woman who are still living, from the limbless Marine propped up in a wheelchair, to the veterans both male & female who have come home with the hidden injury we call PTSD. We honor and thank you particular folks on “Veterans Day”. Please understand, I don’t “celebrate” therefore I don’t say, “Happy” Memorial Day! I swear, I did not steal that from an old George Carlin routine.

Tonight, the day before Memorial Day, I was watching the UFC fights live on television from Las Vegas. I noticed that the two or three fighters who mentioned the holiday during their victory speeches, saying “Happy Memorial Day”,  were speaking to “Living” military folks who have come back from a conflict injured and uninjured i.e., the Middle East.  ”God Bless our Troops” people say, as they wave their miniature flags at the soldiers walking in the Memorial Day parade. The only symbol we have left is if the news show pictures of soldiers planting flags next to the headstone in a military cemetery. Headstone. Sort of a slang term for a, wait for it”…………..a “Monument”, something made from a material that won’t rot and blow away. Granite.

Although I admit that for most of my life, it’s just been another holiday that gives me a three-day weekend, I was really struck by the fact that most people will include the living veterans when they are remembering the military dead. Ask the parents who have given sons and daughters who they think of on Memorial Day. If you are a Veteran, you are still alive! As I was growing up, Memorial Day was fun. Even when we were planting flags next to the graves at church on Sunday for Memorial Day. I was scolded one day for taking a flag from a soldiers grave. He was ninety when he died, and wanted to be buried next to his wives ( Mormon soldier). Pretty fancy monument with an Angel on top.

Mom caught me pushing the General’s little flag into the ground at my sisters grave. I went and stuck it back in where I found it. That I was scolded isn’t entirely correct. My mother explained the true reason for Memorial Day. Remember, we didn’t have  60″ Televisions and Facebook when I was growing up. As I grew older, I always remembered and took to heart how we should honor the millions of people who have given their lives for their country. Veterans Day we do honor the living. Those that have come back home with injuries, and those who came back unscathed. Maybe today’s generation needs to be educated. Maybe we should have a ”Wounded Veterans” day? For those of us that survived a war and came home, Memorial Day is the day we honor and remember our buddies that didn’t make it home alive.

Memorial Day is not supposed to be a happy day. It’s not supposed to be a sad day either, except for the parent or child of someone who has made the ultimate sacrifice. If you have a normal experience of memorializing a loved one, you also remember the happy times, as you watch home movies or look through family photo albums. People who have lost a loved one, can laugh as well as grieve. For the rest of us, that’s all of the people that did not lose a loved one, it should be a day of solemn reflection, honoring all military who have died during war.  Just don’t confuse Easter with Christmas. Think about it. The memorial holiday was created to remember and honor the fallen, i.e., to memorialize those that were killed in battle.

Although as a veteran, if you die at 98 Years old, you can be buried in a military cemetery. I think that should be changed. They should only bury soldiers who have died in combat or as a result of their wounds, in military cemeteries. Even if you are wounded in any way but live to be ninety, you should be buried in a civilian cemetery. The government should provide that same simple white headstone that you would have received for your government burial. Your family could use the simple white monument, a really fancy one that costs thousands, or both. The Veterans Administration would also cover the cost of the civilian cemetery plot.

Don’t worry veterans, we will remember and honor you when you die. On Veterans Day. Not, Memorial Day. If you are still breathing, we will shake your hand, honor and thank you for your service and sacrifice, on Veterans Day.

So, along with those surviving parents and children, let’s all remember our fallen heroes. If you give your life for your country, no matter how fucked up war is, you are our heroes.