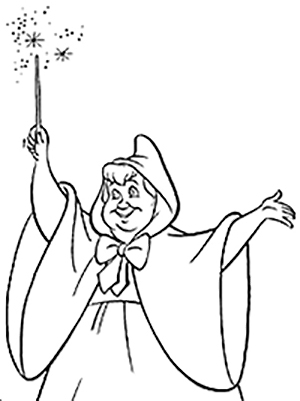 In the story of Cinderella, her Fairy God-Mother creates a bunch of stuff with a magic wand.  Remember? Glass Slippers? A fancy carriage made out of a pumpkin. Not once did you hear anything about Cinderella’s Fairy God-Father.

“I’m going to make you an offer you can’t refuse” (and leave a horses head in your bed). That’s what MY Fairy God-Father would have said to Cinderella’s Step-Mother. Cinderella’s real father had died, leaving her to work in her own home as a scullery maid for her evil stepmother and her equally evil stepsisters. Obviously, and unfortunately, Cinderella’s father left no will or other means to care for his daughter. Did he die suddenly after eating a poison apple? No, that’s another fairy tale. 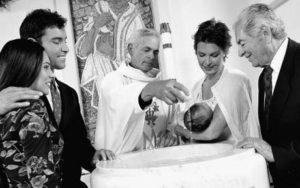 I really didn’t know who my “God-Parents” were, until after Mom died. I think it was my Auntie Alice who told me about ten years later. My god-parents were very strict Catholics and blood-related, my mother’s youngest sister and her husband.  I saw them maybe six times in my whole life, including family reunions. Why bring up religion you ask? Let’s put it this way, “Yes, they were not Italian, they were not Italian that day” (to the tune of, “Yes, we have no bananas,”) Had my God-Mother’s last name been Giovanni, perhaps my brother and I would have received some kind of love and assistance after mother died. Mom had two other sisters and a brother.

Now I see the point about it being a FAIRY God-Mother, its all make-believe. You’re not going to ride in a magic pumpkin and you are not going to get any help from your god-parents or anyone else when your mother dies.  Do I hold a grudge? No, not really.  I can’t really blame my godparents for not being Irish, or Italian, or one of several other ethnic groups with old-fashioned family traditions. Can’t blame their particular religious beliefs either, good Catholics that they were. Good Catholics that they were, they had eight kids.

My aunt and uncle had NO idea what a condom was, maybe thought condoms were used to store bananas. So I can see that while I was busy growing up, they were busy having babies. To this day, I don’t remember the names of ANY of their eight kids, my cousins. 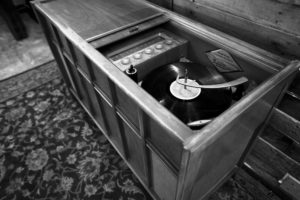 Everyone had enough on their plates. Every single Uncle, and every single Aunt on both my parents sides either had real issues of their own, or just really lame excuses. Blood-related god-parents seeing their god-child once a decade is really lame though. After the funeral, all the adults on my mother and my fathers side of the family gathered together at Uncle Bob’s house. I  guess it was a wake for Mom. Everyone was eating and drinking, some were playing cards. A record player was playing some big band music and the TV was on. I was eventually sent to bed, being told that it was getting late, and that the “Adults” had some issues to discuss. 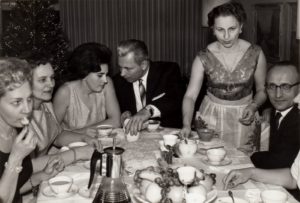 As I was standing there in the upstairs bathroom taking a pee, I could hear the party downstairs in the kitchen through a floor grate by the bathroom sink. I can still remember how funny I thought it was, as I crouched down, nose against the heating grate, looking down into the kitchen, directly above the kitchen table. Although I was already a smoker, my eyes began to water from all the cigarette smoke wafting up through the grate. Okay, I also was crying as everyone had a story to tell about Mom. It was Evie this, and Evie that. Everyone was sharing these wonderful positive tear-jerking stories. She was truly a loving and kind-hearted person. 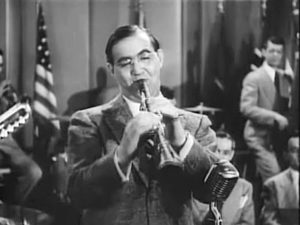 I lay there next to the bathroom sink listening for about twenty minutes, eyes blurred from tears and cigarette smoke. A single word mixed in with the party noise, and the sound of Benny Goodman’s band playing “Moonglow” in the background. That’s all it took for me. I clearly heard the word  “Orphanage”. I got up from my listening post on the floor, and “borrowed” ten silver dollars from the top of my cousin Sandy’s dresser (I paid her back years later).

Before I left, I strained to take one last pee. Except this time I pissed on the floor grate, and let gravity take over. As I walked out of the bathroom, I could hear their reactions to the raining pee dripping down onto their card game. At first, I think they thought it was a water leak.

With the clothes on my back, and the ten silver dollars in my pocket, I ran down the stairs and out the front door. I was out of that house in less than two minutes. That night,  the ten dollars got me about thirty miles out of town on a Greyhound, and my thumb got me the rest of the way. All the way to the Santa Monica and the ocean in three weeks.

Everyone in my generation remembers where they were the day JFK was killed. I was sitting in the County Jail in Lubbock, Texas,(I should have stayed in California). Story for another post.

Back to the loving, kindhearted relatives. The concept of caring for the welfare of a god-child, especially if that child is orphaned, should not just be recognized as an ethnic or religious thing to do, it should be the normal thing to do. You normally won’t see ”Grand” parents turn their back on their grandchildren (except in  my case). God-parents, especially if they are blood-related, should naturally have the same feelings of responsibility as a grandparent does. Some do, some don’t. Especially in the U.S. Message to all God-Parents, take the title seriously.

If the story of Cinderella was written today, it would be okay to ask your gay brother Tony to be a God-Parent, as long as you don’t introduce him as, “This is Tony, my son’s Fairy God-Mother”. That would not be very kind. It would be additionally uncomfortable if Uncle Tony was gay AND had transgendered over. Especially if Tony is standing there in a lavender outfit, high heels, and a blond wig. It’s okay if he is waving around a magic wand however.  That would be terrific.  I think I’ll write a separate story of a modem day Cinderella, visited by his transgendered Fairy God-Mother, Uncle Tony, with a magic wand.  “Uncle Tony, is that really you? Love the outfit”.

Rejection and abandonment, along with the shell-shock of my mothers death contributed to my PTSD. Become a Fairy God-Father or God-Mother to a young person who you know needs your help and guidance.  Especially if they have returned from combat with PTSD. Memorial Day is for remembering the men and women who gave the ultimate sacrifice, their lives, for their country. Let’s not wait for Veterans Day to honor the service men and women who survived war, coming home with physical, as well as mental injuries. They need our help 24-7-365.