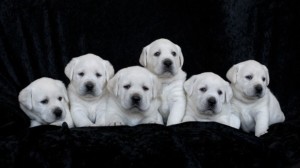 I think I had just turned eight years old. We had been living at the “Old Boxwell Farm” for three years.  My parents paid $60.00 a month to rent the house (built in 1884), and we had full use of any of the buildings that weren’t already being used by the owners.  We would end up living there for another six years. I guess you could say it was like a “Hobby Farm”, just a very large one.  360 acres, a whole “Section” on a map.  With a two-story farm house, a huge red barn, a chicken coop (eventually filled with 300 chickens), a shack for the Muscovy Ducks, and several other buildings and sheds. Google “Muscovy Ducks”.  Not the small, cute little ducks that go quack-quack,  These ducks were large ducks, almost goose size, raised primarily for eating.  They could rip a finger off if you weren’t careful. 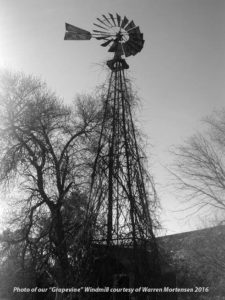 The farm had two different apple orchards. One orchard produced green baking type apples that tasted a little sour, and had tons of worms.  The other orchard had red apples that you could actually eat, had fewer worms.  Yes, I did not care much for my mother’s apple pie. We also had a few rows of yellow and purple plum trees. We also had grape vines growing up all sides of the windmill. This B & W photo is our actual windmill. The windmill was a solid luscious green of grape leaves in the summer.  As a kid growing up on that farm, it was great to be able to enjoy all of the “fruits” and “vegetables”.  And also at that age, it was too bad that I took it all for granted.

About 60 acres was cleared crop-growing land, which was farmed and grazed by the Mortensen Brothers, who had bought the Boxwell farm years earlier in an auction.  The remaining 300 acres consisted of woodland with a small creek running through it. The driveway was about 200 yards long and seemed a mile long in the winter time, i.e., this was before the invention of the “snowblower” and after the invention of the “shovel”.  On the north side of our driveway was what we called our “garden”, which was about an acre or so.  It was a Hobby Farm in that Ed drove 30 miles a day into Saint Paul to work as an electronics engineer at Honeywell, and Mom was pretty much a typical homemaker/housewife. We had a really large garden and ate all the apples and plums we wanted, but we didn’t “farm” the land.

My best friend and companion in my early childhood was my dog Trixi.  I can’t recall how we got her, I just know that she had always been there. Maybe she just came with the farm. Trixi was a mix between a Toy Collie, and some other small dog. She had a long beautiful golden, Collie-like coat.  She wasn’t a lap dog, and she wasn’t a large dog like a German Shepherd, but just the right size for cuddling and loving. Trixi went everywhere with me, my own Lassie story.  When in the house she stuck with me like glue.  When we were eating at the kitchen table she would lay down by my feet. Trixi knew she would get a snack or two or three whenever Mom baked a chicken or duck, or pan-fried liver, or cooked any of many foods that I gagged on (see “Running around like a Chicken with it’s head ripped off”).

Trixi slept with me and truly was my best friend.  That all ended one summer day.  We were working in the garden, and looked up at the road just as she started barking, and running along side Mr. Gustafson’s pick-up truck.  This was nothing new.  Trixi did it all the time. She chased every car, tractor, or truck that drove by our farm.  She just knew how to dodge the tires.  Well, this time she yelped and disappeared  under the truck.  Mr. Gustafson immediately stopped his truck and got out. Picking Trixi up into his arms, he slowly walked towards me with her lifeless body in his arms. Mr. Gustafson was crying, Mom was crying, even Ed had tears in his eyes. I cried for a week. The sadness and grief I was feeling was a practice run for my sister’s death, and eventually my Mother’s death

After about three months, Mom talked Ed into getting a puppy for the family, to replace Trixi. Ed really loved Trixi as much as I did, and I think it was an easy sell to get another dog.  They had met a fellow at church, Mr. Freeman, who bred and sold Golden Labradors. So one day, I went with Ed to see this Mr. Freeman to purchase a puppy. I was soooooo excited!  Walking around behind the guys house to the back of the yard, we came upon Mr. Freeman beating on one of his Golden Labs with what looked like a leather belt.  The Lab was tied up, and Mr. Freeman was trying to get this dog to jump up on the roof of one of the doghouses, like Snoopy. Ed flew into a complete rage, running over and throwing Mr. Freeman to the ground.  I was left standing there, mouth open, watching as Ed took the belt and started wailing on  Mr. Freeman, “You jump on the Fuckin’ doghouse you Asshole!”. I ran over to them screaming “Stop Dad!!” (or whatever it was that I yelled). Ed did come to his senses, and we walked back to the car.  A little fearful, but happy that Ed had stood up for a helpless dog, on the way back to our car, I thought to myself, “I guess we’re not getting a new puppy today”.

The next day the local constable came over and I saw him talking to Ed for quite a while.  Turns out, Mr. Kirkdahl, the constable, sympathized with Ed because of how badly Mr. Freeman had beaten the dog. No charges were pressed in either direction, although I thought they should have done something about Mr. Freeman.  The embodiment of Joy came about a month later, when our neighbor Mr. Gustafson, came over one day and handed me a Golden Retriever puppy.  I named her Alice.