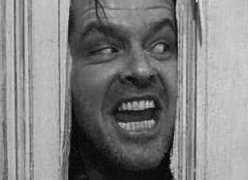 1958, and I was ten years old, and Johnny was two. My baby sister Mary was born. I remember, this was one of the times when Ed was put away for spousal abuse. However, rather than receiving a prison sentence, they put him in a Mental Hospital. He was gone for quite some time, at least 9 or 10 months. I remember it was different at home, better for sure, and I think things were getting better for me at school as well (I tended to “act out” what happened at home). I wasn’t a Bully, but when someone would bully me, I would most often go a little berserk fighting back. It’s a little scary when a skinny ten-year old yells, “I’ll RIP your fucking head off Asshole!!!” That is usually when an adult, like a teacher would step in and stop the fight. The fighting became less frequent.

Mom was reclusive that first week home from the hospital with the baby. Maybe she knew that Mary was going to die, and the Doctors knew, and just let Mom take Mary home anyway. We buried her at the church cemetery in a grotesquely small coffin. Maybe it was a shoebox, I don’t know. It would be years later when I asked Mom for the one millionth time, “Mom? Why did Mary die?” Mom quietly said, “She had some things wrong with her that caused her to go be with the Lord sooner, rather than later”. Many, many years later, Aunty Erma told me the nitty gritty of it. Ed had hit her in the stomach at about the seven months stage. That was one of many times when I “visited” cousins while Mom was in the hospital. The doctors ran tests, took Xrays, and gave my Mom the thumbs-up, and the hope that maybe the baby would be OK. Well, the baby survived all the way through the birth, was not OK, and died seven days later. I still think they put her in a Florsheim Shoe box.

At the time, I was too young to understand what happens to people in the Booby-hatch. That’s what we called it, besides Looney bin, or Nuthouse. Shock Treatments. Google it. It’s not pleasant. It doesn’t help. Ed came back home crazier than ever. Of course I was to young to say, “Why didn’t they give him a fucking Lobotomy!” This would be the down-hill slide for my Mom physically, and for the family mentally.