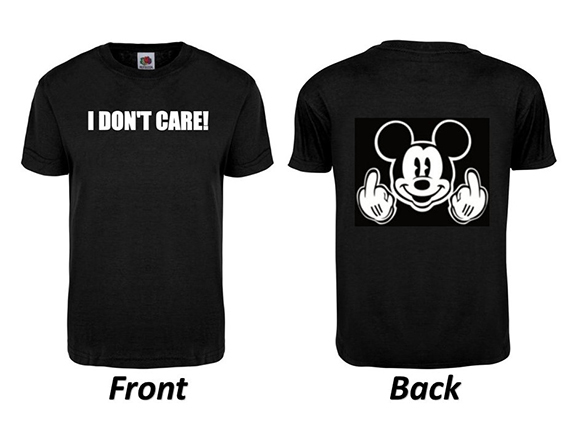 I came up with this simple T-Shirt “Message” based on how I react when some religious type starts going into full-on missionary-mode in trying to convert me and question/prove that my lack of belief in their religion is wrong.

Our “I DON’T CARE” slogan will go viral, like a few of those political slogans….“Make America Great Again (MAGA)” and “Build Back Better” (author’s comment: Just give us back what we had).

The I DON’T CARE T-shirts will become highly collectible, with one, the author’s original T-Shirt, signed, selling at auction at Christie’s in London for an amazing $297,000 in August of 2022.

You have already read what the original intent is, now here are the three targeted audiences. First target audience is ALL religious types who either does the “Missionary” shit and knocks on doors to give the homeowner a preachin’ to, and/or the occasional drunk at a bar, sitting next to you, talking about how wonderful Jesus is, or your Crazy Uncle George who says you’re going to Hell every time he comes over for Thanksgiving potluck dinner and brings his usual crock-pot of Beans & Onions.

The other side of the “Koin”(go to www.irthkoin.com for a remotely linked project to this T-Shirt), are people like myself who don’t believe in ANYTHING, that can shut down the three Mormon chicks that I invited in the other day because one of them was REALLY CUTE…because those three words, “I DON’T CARE”, can be repeated many times, maybe only once if that Mormon chick turns out to be REALLY STUPID and you stand up and welcome them to leave, or perhaps you repeat our wonderful slogan 17 times, because that really cute Mormon chick has been coming on to you (you think).

If worn in public, like walking down some crowded boardwalk, the design of our shirt is meant to give a “Sign” to those walking behind you. Regardless if those people behind you are angered, just really curious, or the third type, that really religious dude that says to his wife, “Mother, watch this. I’m going to bring him to Jesus”, they will inevitably speed up their pace to catch up to you to either “get in your face”, or out of curiosity, they just want to see your face, or begin evangelizing the hell out of you. All three of these types will see the slogan on the front of your T-Shirt, I DON’T CARE!

Your Crazy Uncle George, Missionary Bob or just some drunk in a bar: “But you do know, that unless you receive Jeebus Bhist as your Lord and Savior, you’re going to burn in Hell”, to which I respond, “I don’t care. Just as you have the freedom to believe in your “Fantasy God”, please allow me that same freedom to NOT believe in ANY of the man-made religions & gods. As I said, I DON’T CARE”.

If worn in public, like walking down a crowded Venice Boardwalk, the design of our shirt is meant to give a “Sign” to those walking behind you. Regardless if those people behind you are angered, just really curious, or the third type, the really religious dude that says to his wife, “Mother, watch this. I’m going to bring him/her to Jesus”, they will inevitably speed up their pace to catch up to you to either “get in your face”, out of curiosity, they just want to see your face, or begin evangelizing the hell out of you. All three of these types will see the slogan on the front of your T-Shirt, I DON’T CARE!

Most people would be pissed if someone set THEIR dog on fire. Not me. What did I do after initially yelling, “HOLY FUCK”? I laughed. It’s a more interesting Modis Operandi to live by instead of all the negativity, like anger.

Many of my friends know the story of how and when I was able to forgive my stepfather for beating my mother to death when I was a young fifteen- year-old kid who had just turned fifteen. That ability to forgive is THE MAJOR FACTOR in living a good life. Without religion by the way, I’m an Atheist.

So, unless the use of a mouse which happens to be THE Mickey Mouse deeply offends and/or scars a person for life, I intend to stick with it for its simplicity and “Signal” that it gives. In other words, We can care, perhaps ramp up our emotions if something takes place that we either like or dislike, but the proof in the pudding is when you can see the forgiveness when we need to (coming and going), and also see the Pure Joy when something good happens, sooooo, chill out, life’s to wonderful to bitch about the small stuff. That’s why when Susie sheepishly tells me she ate all my fuckin’ Chocolate Ice Cream, I can immediately respond back, “I DON’T CARE”.

For anyone desiring one of these high-quality Premium T-Shirts of their own, you can contact me by Message or send an email to theunknownsockpuppet@gmail.com and let me know the size and quantity and I will give you a price. Only available in Black for now. Thanks. Don’t feel pressured, because if you don’t buy one, “I DON’T CARE”, hahahahahaha