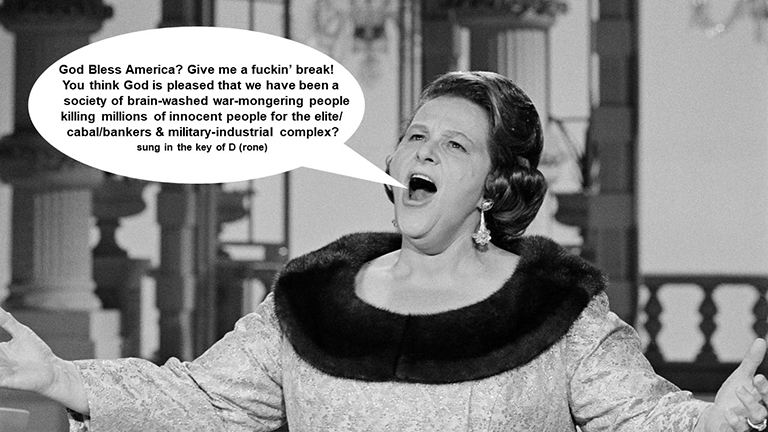 “God Bless America”. That song as sung by Kate Smith, was played over and over again in our house when I was a child., I think my mother finally wore out the record because she stopped playing it after a few years.

As I ponder that song and popular saying now, I have, at least for myself and I know millions of others, decided it’s really an inappropriate thing to sing or say about “America” at this particular time in our history. “Useless as Wings on a Penis” as I like to say quite often.

Why you might ask? Well first of all, take a look at the state of our existence as a “Nation” of people. Our country is and has been, a horrific example of what the words in that song AND the “Star Spangled Banner” represent. “Stand beside her, and guide her”…..SURE! Don’t you just love how “God” has been guiding us? It’s like the words in our National Anthem. “O’er the land of the free and the home of the brave”….Land of the free? Bullshit. Home of the brave? How about the home of the fucking war mongers?

Second reason, there is no “God”. If there was, he/she never would have allowed our nation AND our world to get as fucked up as it is right now. You can’t put the blame OR glory on someone or something that doesn’t exist, so the next time you hear “God Bless America”, or you hear someone utter that phrase, remember that the founding fathers purposely and clearly demanded and mandated a separation of “Church” and “State” for a reason. Listen carefully to the words and reflect on the fact that it has nothing to do with some imaginary dude up in the sky “Blessing” us.

As a nation of people, we have been mis-guided ad lied to by our political leaders, taught the wrong kind of principles and philosophies in our schools, and mostly brainwashed into believing that our military might was good for what ails all those countries that we have dropped bombs on (think natural resources, like OIL). What a shameful history of “War-rIfic” violence we have, “Thanks GOD. Thanks soooo much for guiding us”.

No purposed intent to rag on “Veterans” here on “Veterans Day”, BUT, and as you can see it’s a BIG BUT, throughout our war-mongering history, people, i.e., the general population, have been conditioned to believe that our soldiers and sailors were doing their patriotic duty, you know, killing and maiming millions of fellow human beings. There was REAL patriotism I suppose for the wars known as the “World Wars”, and perhaps the Korean War……wars that one could argue were a necessity, but when you follow the money, it seems that ALL wars have been “Bankers Wars”.

Every warring activity in the past 60 years or so have been as war-mongering as they can get. So, honoring our veterans leaves a really sour taste and/or smell. That’s why we see a huge portion of our modern-day veterans turning 180 Degrees AWAY from the norm of brain-washed mentalities in support of our military activity and now using a little Common Sense by opposing our war-mongering activities.

Personally, I have been in that small but growing segment of society that opposes all wars since the early 1970’s (since the Vietnam Debacle). Today, (and for many years), I find it difficult to form the words, “Thank you for your service” when the conversation calls for it. When folks say that to me, I politely brush it off, so, I don’t celebrate or appreciate Veterans Day, sorry.