Have you ever been in a conversation wherein you feel like you are in total, 100% agreement with the other person, spouse, friend, whatever, and in spite of saying to that person that you ARE in total agreement with them, (that THEY are right/correct), they continue to argue their point, battering you in a somewhat belittling manner? WTF you think, right? What drug is THIS person on anyway?

You keep agreeing point-by point with your spouse, friend or co-worker 100% with what they are saying, and they keep telling you that you’re wrong, that you really don’t understand…..that you’re an idiot or something. And that experience is totally bewildering to you. “Don’t you understand? My bra straps are digging into my skin”….”I agree, perhaps you should switch from a Double D cup to a Triple E”. Let me explain the front end of this experience.

I’m a writer in my retirement. I don’t play Golf because I HAVE been told on a few occasions to choose a different activity, like “Fly Fishing” or Solitaire. I’m not a wealthy man so cruising the world on a 200-foot yacht as an extracurricular activity is definitely out of the question. What I do is write. About everything.

I have a website/blog of my own that I use as a platform for publishing my writing. I’ve had my primary website (I have several) since January of 2016 which was originally intended to be a platform to just share stories of things like my childhood, growing up on a farm, etcetera, with my two “Adult” children. I first started writing to my children because the following month, February of 2016, I was scheduled to have some really gnarly surgery and I knew that I was going to die on the operating table. Obviously, as you can see, I lived.

In addition to my website/blog which now has over one million visits from about 179 countries at last count, I’m very active on farcecrap. I say very active because in addition to my farcecrap home page, I have 41 other “Pages & Groups” of my own that I publish to, in addition to 40+ other groups that I belong to. It’s my sole extracurricular activity, and I totally enjoy it.

Many of the stories/essays that I publish on my website (plus sometimes the Memes that I create along with those stories”, I also publish on farcecrap as a “Link”. Many essays are of a serious nature/subject, and many stories are about my best buddy Shelton, my West Highland White Terrier, and just as many stories are my attempt at “Stand-Up” or in my case, “Sit-Down” comedy. I intentionally publish my writing to farcecrap as a way of directing traffic to my website, plus I have made a lot of real friendships there.

So, instead of playing golf, fly-fishing, shooting ducks and/or deer, or bowling, I write. With as many various groups and pages that I do have, and because I’m always at the set limit of 5,000 friends on farcecrap, publishing my writing does take time, and sometimes seems like a full-time job. Because of that, I don’t always respond in an expedient manner to the many comments and “Private Messages” that I receive on farcecrap because of the amount of traffic I receive.

Some people, mostly people who are NOT on my “Friends List” (real friends that know me), get upset if I don’t respond right away. Recently, there was such a person, who commented on one of my serious posts, and I felt inspired to write about it.

Here’s a Meme and a few paragraphs of my essay to give you an idea what my post was about: 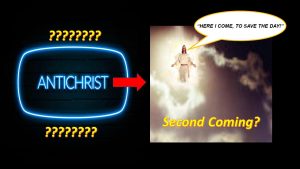 For something or someone to eventually appear as the “Anti-Christ” and show it’s/his/her agenda, you also would have to believe that Jesus or some other kind of “Savior” is ALSO going to eventually appear. As an Atheist, I don’t believe in ANY of that “Religious” mumbo-jumbo. What I DO believe is that TECHNOLOGY will eventually lead mankind into the fullness of the Age of Aquarius, the “Age of Technology & Peace”.

One only needs to see what technologies like computers and the “Internet” have accomplished so far. People are able to instantly communicate on a wide scale with others who are “Like-Minded” as well as take part in discussions with people and groups that don’t think or believe in the same concepts/notions/theories/objectives.

Here’s a small portion of the dude’s first response “comment”:

I can’t believe you can’t relate “what I do”, in the very first paragraph. That is the god in you, that is going to make all the difference. Shake out of it man!!! The master liars avoid us using technology, to beat them! May I introduce, censorship and algorithms and community standards!!! Let’s talk about the lack of organizational and collaboration and correlation!!! You say not one person or group can change the world, as you bash what stands for good and let the bad guys off the hook, by aiming your energy in the wrong direction.

I didn’t respond right away, so what does he do? He comments again, this time asking me why I had not responded to his original comment. I saw it, and after a few days responded back, politely, thanking him for his comments, explaining politely the number of friends on my “Friends List”, the number of groups & pages that I publish to, etcetera, and that I certainly WOULD respond to him at some point in time.

Now, he comments again, beginning with:

No response Tom Saxe? Am I not worth your time?

He wrote: Your avoidance is very telling and I hope your followers, can see that clearly.

Multiple comments, to which I politely wrote back to him with a re-hash of my previous comments to him. To be honest, I pretty much told him again and again that I was in agreement with most of what he was trying to convey to me, telling him that the two of us were singing out of the same hymnal. I had suggested a few times that he read the various essays on my website that dealt with the subject matter of my post in a deeper fashion.

Then a final repeat from him which was like a book, again. Here’s just a small portion:

He wrote: I can’t believe you can’t relate “what I do”, in the very first paragraph. That is the god in you, that is going to make all the difference. Shake out of it man!!!

These very lengthy, multiple comments from him finally convinced me that he had no fucking clue, as far as understanding what my responding comments to him were……that I AGREED with him. It was beginning to feel like a situation wherein you are telling your spouse friend or co-worker that THEY were right…..but he or she STILL wanted to argue, POINTLESSLY I might add.

This dude kept saying that I really didn’t understand, implying that I needed to be schooled on HIS beliefs/thoughts/philosophy, whatever…..and I kept clicking the “Like” button, and responding in a polite, sociable manner, but his comments kept getting more and more bizarre, and negative.

Now, my friends know that I’m an atheist, and that generally, I state that people can believe in whatever floats their “Religious” boat, as long as I’m allowed the same freedom to NOT believe in anything at all.

After reading his last repeated comment which said, That is the god in you, that is going to make all the difference. Shake out of it man!!!”, I politely responded back telling him that I was no longer going to continue the farcecrap conversation with him. I wasn’t angry or upset, I was just tired of it all, like the person who had been repeatedly telling his or her spouse, friend, or co-worker, that their spouse, friend, or co-worker WERE RIGHT…..In my case, I kept telling him that I agreed with 99% of his schtick. That he and I WERE on the same page of the hymnal. He just wasn’t listening.

As comic-relief for myself I thought, maybe what I finally should have written/said was, “Take YOUR God that is in YOU, and stuff it up your Ass”, (but I did refrain from typing that). Quite frankly, I DID appreciate and understand much of what the dude said, I just got to a point where I felt that he was on an acid trip or something. I have not “Blocked” him like I do with the Zionist trolls and other negative people. I’m just bewildered and tired of the conversation with him. I MAY or MAY NOT accept a “Friend Request from him, (leaning towards not).