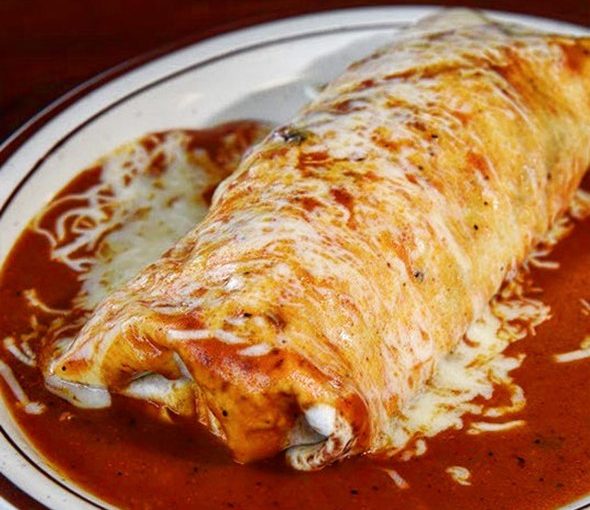 For all of my friends that play real Poker, live in person, not the online crap, you probably already know that one of the key factors in being a successful poker player is “reading” your opponents “Tells”. Those sometimes-easy reads AND the mostly difficult reads, when an opponent’s “Tells” give the other player’s information about the strength or weakness of a hand, I.e., “Reading a bluff” for example, or knowing when to fold because a player’s particular “Tell” is “Telling you and the other players”, that he or she has a “Nut” hand, and a “Fold” of YOUR hand would be advisable.

“Tells” can be ANYTHING. The way a player caps his hole cards with his little trinket like a Gummy Bear, or the way a player repeatedly looks at his hole cards as if the cards might have somehow changed, “Yup, my Pocket Rockets are still there”. A “Tell” can be something like, scratching his or her head or nose, or it might be a certain look, like a smirky smile or frown, or an action like pulling the hood on a hoodie over his/her head completely hiding his “I’ve got the nuts” grin.

You will notice that the best of the professional poker players are emotionless, and very difficult to read, but even with them, they DO have “Tells”, it’s just more difficult to see them and takes repeated exposure to them over time (sometimes years) to figure out what their particular “Tells” are. That’s why THEY are millionaires, and you’re not.

Now, I’m NOT a “Pro”, as I can’t afford the huge tournament entry fees which can be as much as $10,000 for most of the largest tournaments. I HAVE won one old-fart Sunday tournament many years ago in Laughlin, and I consider myself to be a fairly good “Texas No-Limit Hold’em” player.

Part of my own “Game/Strategy” is telling all the other players right up front at the beginning of a tournament/game exactly what to watch for, as far as MY potential “Tells” COULD be. I say COULD be, because it adds a little confusion when they have to either believe me, take their chances or not, I.e., “Is that REALLY a “Tell”, or not?”.

As an example, as soon as I sit down, and before the first hand is dealt, I’ll tell the table that if they see me leaning slightly to my left, slowly lifting my right butt-cheek off my chair as if to fart (and sometimes I MAY have eaten a greasy burrito prior to the game and I DO release a little gas), that “Tell” is indicating that I have “Pocket Rockets” and the “Flop” was “Ace-King-Three” off-suit. In other words, an extremely likely, very high percentage, “Nut” hand for me (or not).

Why I said (or not) at the end of the previous paragraph is because obviously, getting Pocket Rockets (Aces) doesn’t happen very often, so that “Leaning-Fart Tell” can also be used in a bluffing situation when I have a junk hand. This announcement of that particular “Tell” can be randomly used with any “Nut” hand as well. I mix up the “Tells” during a game, and by being up front about it, the other players have to think a little more carefully, Is he bluffing? Or does he have a real hand? I call this strategy “Tell Management/Confusion”.

Players are always trying to figure out what other players “Tells” are, so adding a little confusion to the mix by announcing what to look for is fun, and absolutely funny to me. Be very careful with your play/betting action when you see me slightly lift either my left or right butt-cheek off my chair .

If you’re going to attempt this strategy, I suggest that you eat really greasy Mexican food prior to the game. Another favorite “Tell” of mine is picking my nose, which I also mention at the beginning of a tournament/game. Friendly reminder, bit of advice, do not, I repeat, do NOT flick that booger at the dealer when he’s not looking. The other players WILL “Tell” on you. 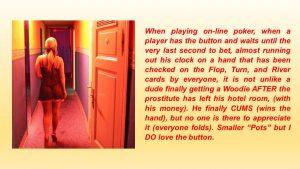 Occasionally, but rarely, someone raises your substantial bet that you placed after the “River” card from the “Button” by going “All-In”. They either have been checking all the way through the hand with the “Nutz”, or they are trying to bluff you off the pot. You have a decision to make. Either call the “All-In” bet….Or “Fold”, either losing to the Nutz hand and leaving that table, or winning big-time. The related analogy as a continuation of this MEME/Story is the maid suddenly unlocks your hotel room door, walks in, and catches you “Spanking the Monkey” after the Hooker has left. 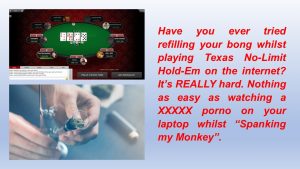 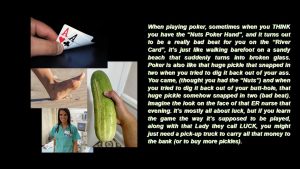 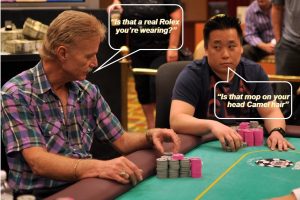 Thanks for reading this little essay. Let’s play some poker!