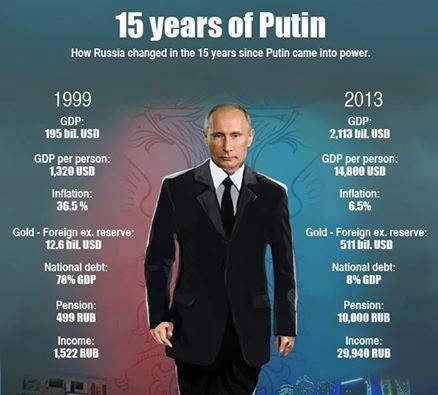 I never was a fan of the USSR and their Communism, obviously it was a system that did eventually fail. But, and it’s a BIG BUTT, in spite of the fact that as a fairly new system, the Russian political system is one of the more recent to embrace democracy and is deeply flawed in terms of its democratic credentials, tainted by corruption, and influenced by the power and personality of one man, this dude Putin is OBVIOUSLY doing the right things as a leader of his country and for his country. Russia’s system of government is called a federal semi-presidential republic, according to their 1993 Constitution.

Wither or not the figures stated in the Meme are close to accurate or not, the interesting occasion recently when Putin was on hand for the grand opening of a Mercedes factory tells me that more and more Russians are financially able to purchase one, even if it is the cheaper and typical “Taxi” version that has been selling forever in Europe and everywhere else besides the USA. I bet they are buying the models with leather interiors though. This is a positive sign that Russia’s economy has been improving.

If you follow history, the REAL history of our species, you will see that the usa (not capitalized on purpose) has been slowly going downhill, without Jill, ever since Eisenhower warned the American people regarding the growing menace of the military/industrial complex. Then, the zionists, who already controlled the military/industrial complex in the usa and great (fuck that) britain, already controlled hollywood, the media, AND the banking system, killed JFK.

Then the wars continued, the false-flags continued, and the zionist assholes in control of our government continued to take OUR tax dollars and send it to the so-called regime referred to as israel (again, not capitalized on purpose), allowing them to develop their nuclear weapons capability, (which by the way, they are the only folks that have NOT signed the Nuclear Non-Proliferation Treaty.

Folks, we ARE coming to a “Fork-In-The-Road” as I see it. There will be a “left” fork and a “Right” fork. The left fork is the road the nwo/zionists assholes are leading the sheeple towards, and there ARE a lot of sheeple with no common sense whatsoever, willing to just follow along towards that “left” fork in the road.

The RIGHT fork is, and will continue to be, a very difficult road, difficult first of all, in that it is very hard to convince the sheeple to listen and become aware, and becoming aware, change their direction and head down the RIGHT road. The number two reason why it is so difficult. is the fact that even though we probably out-number the sheeple, ALL of us like-minded folks that are actually shouting our message from the proverbial rooftops are like “A Single Fly, Farting in the Wind”, HELLO, no one really hears us because of the fact that we are NOT organized.

That is why I have been promoting the itad-nao website, to first get us all off of farcecrap, and secondly, to provide all of us with a new medium for us to “Congregate, Communicate, Organize, and actually DO something that WILL be heard, unlike that “Fly Fart”. For those like-minded folks that would like to visit the itad-nao website, just “click” on the link below.

All we need is ONE filthy-rich donor who doesn’t have his/her head stuck up their ass to fund the itad-nao website and several “Brick & Mortar” locations around the globe. Thank you very much.