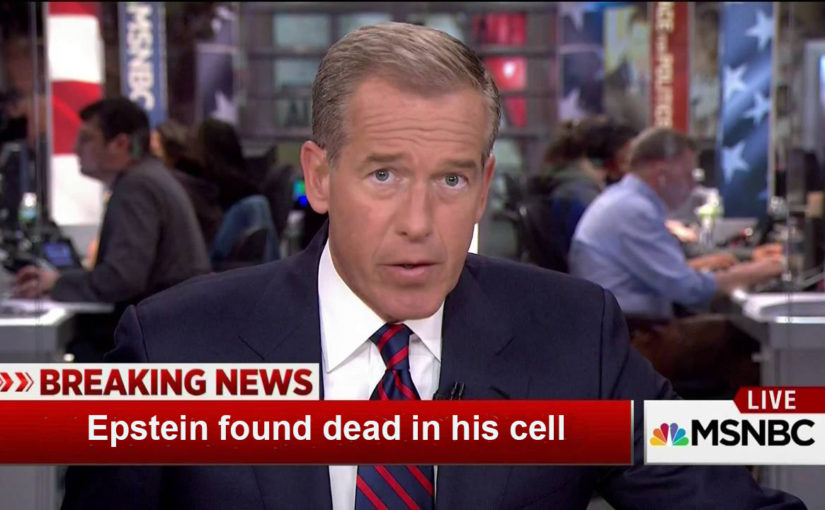 NEWS FLASH!! Pedophile Jeffrey Epstein, no longer a viable “asset” for the Mossad, found dead in his cell.

Well, actually, for real, yesterday they found him semi-unconscious with some sort off marks/injuries on his neck. Either self-inflicted or “Bubba” inflicted.

Even if they put him in “Protective” custody, he’s either going to have a sudden “Heart Attack”, or they find him “Hanging” in his cell, that is if someone in his Little Black Book, like Clinton, Trump, or someone else gets to him before “Bubba” does.

What’s more appropriate than a convenient heart attack? Death by ‘Bubba”, and that can be far more punishing. Most “Cons” hate Pedophiles & child killers.

I can see the headlines now, “The Pedophile Jeffrey Epstein has been found brutally murdered in his cell, Raped, Choked, Stabbed to death and left in a pool of his own blood, with a Baseball Bat shoved up his ASS, (dry, no KY) (and his Testicles viciously ripped from his body and shoved down his throat).

I know that sounds really nasty, and “Vengeful”, but it’s not vengeance, it’s called KARMA. It should be the normal punishment for dudes like this. No human should wish the death of another of our species, but as a species, we do condone the appropriate punishments for certain criminal acts. I believe that the fictitious story about “Prison Punishment” as I have presented. is purely my response to the “Crimes” committed, and the Bad Karma that follows such crimes.

Just woke up, and while I was sleeping, farcecrap through me in jail again. If ANYONE reading this has an answer as to why farcecrap keeps doing this to me, please comment or PM me and let me know. Even the feature of “Appealing” their actions would not work for me when I tried to file an appeal.

There still is time for the rescue of our species from zionism, and the nwo elite. Join “The International Tabernacle of Abiding Dudeism” at www.itad-nao.com