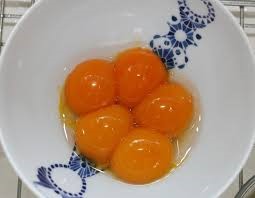 If this sounds trivial, then so be it. Since I have been living here now (for a month) in Ensenada, I have noticed something that has brought back some childhood memories. The “Eggs”. The eggs here have a more vivid, orange color to the yolks (more protein?).

The eggs I’ve been used to a good portion of my adult life have had a less vividness or color to the yolks in comparison. Perhaps the more vividness of the yolks here in Mexico are due to a better diet/food that the chickens are fed?

Anyway, so as I’m eating this simple but delicious three-egg omelet this afternoon, a childhood memory came to mind. I grew up on a farm in Minnesota. Along with the typical barn and various other sheds and buildings, we had a huge, empty Chicken Coop, I’m guessing around 1,500 square feet of floor space with roosts, and places for the chickens to lay their eggs built along two of the walls of the structure.

In the spring of the first year there on the farm, Mother decides “We are going to get some chickens for our Chicken Coop”. Back in the day, and this was about 1953 (I was five years old), you basically could buy ANYTHING out of the Montgomery Ward’s catalog. Mom bought about 250 chicks, and I mean baby chicks form “Monkey Wards” as I called it.

Of course you just can’t throw them into the Chicken Coop when they are just hatched little chickens, so what folks did, and it’s what my parents did, was to build what’s called a “Brooder” and strategically put it in one of the upstairs bedrooms which happen to be next to mine. The only way to describe a brooder is to imagine a huge platform bed-like structure, larger than a king-size bed, with about a dozen or so large light-bulbs inserted through the platform, so that the little chicks would have warmth while they peeped (imagine 250 little chicks “peeping” right next to where I slept, or tried to. Now imagine the smell, yes, along with the ever constant peeping, there was eating of the prescribed little chick food, and along with the eating came…….Guess what?,,,,,, 250 little chicks shitting 24/7.

The reason for the brooder, to allow them to grow to a size where they could survive in the chicken coop, I can understand that, I just think it would have been okay to throw all them fucking little chicks in the chicken coop on day one. Now, by the time they were large enough to move them out of that room next to MY bedroom, many of the little chicks, growing ever larger, (more feed, more shit), had died of I guess natural causes, so we managed to move about 200 of the original 250 into the chicken coop. The persistent Weasels is a whole other story.

Yes, we had the best eggs then, and I believe that same quality of egg is what I just finished eating, my three-egg, simple omelet with cheese. I will be buying the same brand of eggs in the future. Memories, mostly of the noise and the smell next to my bedroom.