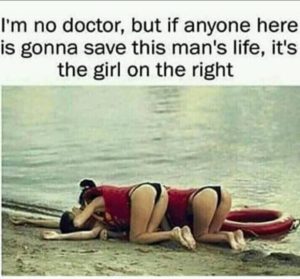 I ripped this Meme off of farcecrap tonight and I’m posting the “Comment” I wrote to the original poster person……..Thought it was funny, the Meme and my comment.

LMAO because at very first glance, enhanced by some really good cannabis, you are focused on the dude first, to see who the lucky fucker was to get a babe to give him :mouth-to-mouth” resuscitation, and less than a fly-fart later as you are still reading and get to…”the girl on the right”, the “it’s” right before it isn’t even recognized UNTIL you SEE the babe on the right, trying to suck the life out of him while the first babe is trying to blow life saving air IN to him. Hahahahahahahahahaha P. S. Isn’t it interesting how the Brain & the Eye work together? In my case, my eye caught the babe on the left first, nano-second later, the dude, nano-second later as my Brain was analyzing the words, “the girl on the right” and I realized there were TWO babes in the picture.