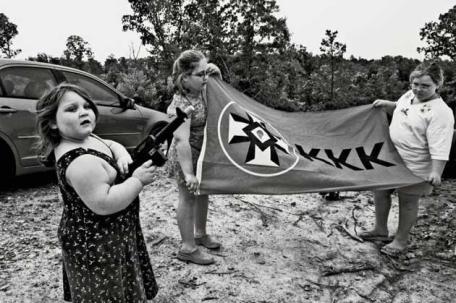 Raise two blind children together as loving brothers, one white, one black, and they shall remain loving brothers for the rest of their lives. As a species, I believe that in spite of our differences, we can evolve to a virtual blindness when it comes to race, color of our skin, societal and cultural differences.

Sixty years ago, it was rare to see people standing together as one people. It was a social phenomenon to see whites marching and protesting alongside blacks. For sure you did NOT see people of color marching side by side with the KKK.

Now, sixty years later, as a human race, we march and rally together, regardless of the color of our skin, or what or who we worship as a god.

Evolution is shy. It takes place behind the scenes almost in a silent secretive, manner. A few of us can see it, as we study and compare the decades past, and contemplate the distant decades of our future.

It has become much easier to announce or proclaim what we can see happening to our species with the advent of the electronic age. The primary messages throughout our existence that were stifled by our early stages of evolution, are now becoming loud and clear, and are quickly spreading to others via tools like the Internet.

Love, not hate one another, treat your fellow humans as you desire to be treated. How simple is that? Think about it. It’s called the Golden Rule.

You are not born with a “learned” hatred, but you ARE born with the ability to “learn” how to hate one another, (insert image of 4 year old white child holding a semi-automatic weapon, sitting in front of a symbol of white power). You are also born with the natural (human nature) ability to love one another.

Choose one. If you picked love, without any outside influence like religion, your parents or someone else’s ideology, you picked correctly. This is not a one way street. ALL of us need to not only choose love, but reject any influence or teachings of hatred and bigotry.

Some of you already know my position. Good Karma forgives, Bad Karma does not forgive. Love forgives, hatred does not forgive. People, cultures, societies, that can LOVE one another, can live together IN love, and peace, regardless of what you call that piece of earth that you co-habitate on.

How about a country called “Israelistine”? Or “Palestisrael”?  Think about it folks. We are coming to the crossroads of our evolution here on earth. I am convinced that love, Good Karma, can and will conquer the Bad Karma and hatred that we have lived with for thousands of years. Spread the word, spread the love. Experiment a little, be kind and forgiving to everyone just to spite anger and unforgiveness.