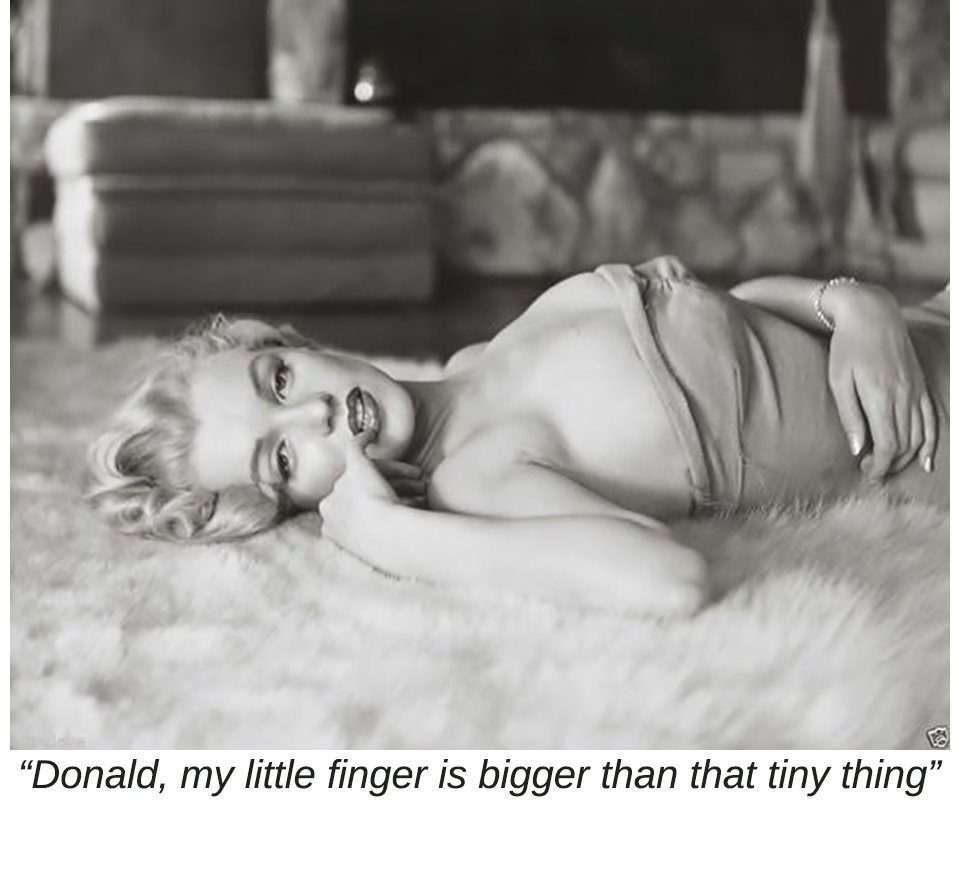 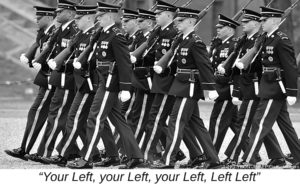 Maybe they are so fucking stupid someone has to tell them which foot to put in front of the other? Maybe someone should  try yelling, “Left, left, Left, Left, Left, Hut One One One One, Left Left?” to confuse them?

I am so much more convinced every day since my stroke last year, that it’s time for us to stop the killing. Who do we send into battle? Our children! I’m convinced that the age of commitment, draft or volunteer, should be raised to 25 years old. The soldiers and sailors that are being killed are barely out of their teenage years. Likewise for those that come back home, some without arms and legs, barely adults, some of them not old enough to drink yet, as they roll their wheelchair into a nightclub, they can’t legally buy themselves a White Russian, because their state says that they have to be 21 in order to even buy a beer. 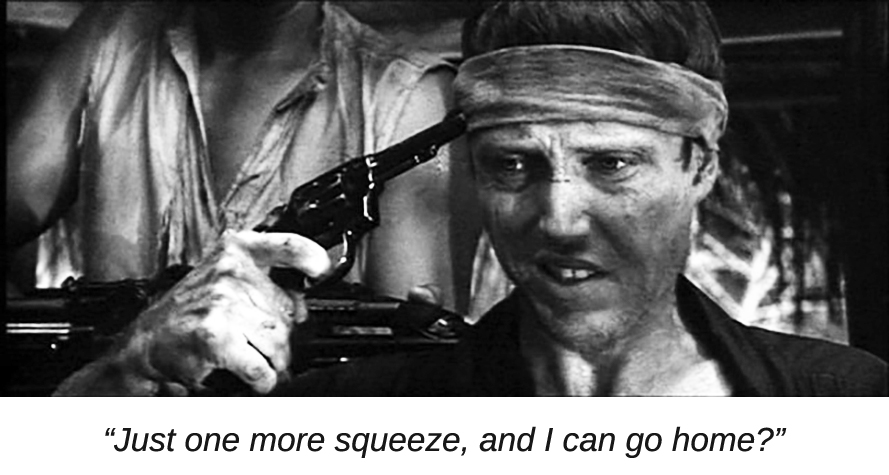 We sent them to a foreign country to play good guy to kill the bad guys. Let’s face it.  We may as well have them play Russian Roulette. The poor bastards that make it through the game until the other dude blows his brains out gets to go home. Think about it. We send our children to kill everything in their path and expect them to come home normal? Stop the killing, stop the insanity, and stop sending our young people to war.

Personally,  I feel that 25 is too young. Maybe 30? It doesn’t make any sense at any age.  Well, except for maybe you raise the minimum age for commitment, draft or volunteer, to 75? 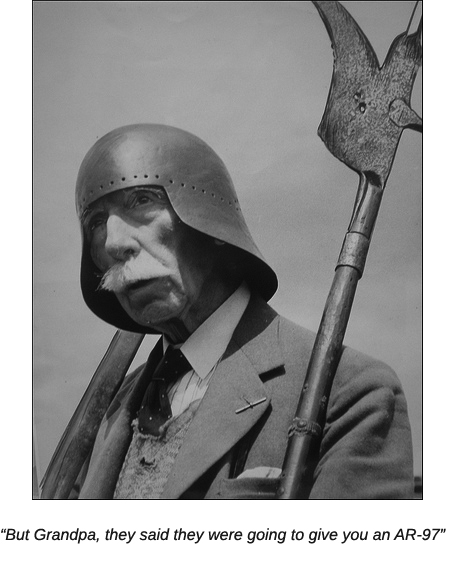 Maybe an Army full of old farts? Let the younger than 75 stay home to build a career and a family. Think how proud and patriotic grandpa would feel charging out of the trench into battle, knowing that he lived a good life, that he had a fulfilling career and that he lived long enough to play with his grandchildren. That is, until a day before his 75th birthday.

Boot camp? Skip the physical fitness crap, you don’t have to be an Arnold Schwarzenegger to pull a trigger. I would still require a mandatory psych evaluation to serve our country, as a soldier or President of the United States, or any public service position. 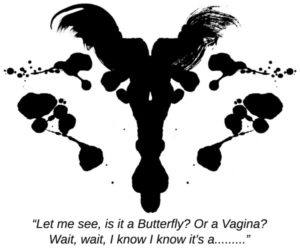 Can you really catch all the grandpas and grandmas trying to feign mental deficiency? “Mr. Jones, I see from your records that during your lifetime, you created a family dynasty worth millions growing Medical Cannabis in Alabama, and now you are trying to convince me that you are crazy, or too stupid to go to war? I don’t think so, Mr. Jones!”

We can evolve. We can change our spirits and mindset. As a species, I am confident and hopeful that mankind can and will, eliminate violence in general, and war. Everyone has to do their part.  Love one another,  be kind and forgiving towards each other, practice compassion with everyone you come in contact with, and seek the kind of world that WILL become our Utopia.  Let’s use the military budget monies for things like healthcare, education, science, infrastructure and the war against poverty.

I don’t think that I’m being delusional with my thoughts about violence, killing, and firearms. I don’t care if you happen to think that I’m Batshit crazy, how about YOU coming up with the answers. I vote for psych evaluations.

As I am writing this, I am listening to Trump’s current and third wife, Melania, answering questions from Anderson Cooper. I have the Republican National Constipation on TV just for background noise. Some of her answers were as if she was an expert in American politics and Washington DC.  She’s from Slovenia for Gods’ sake! She might be a smart woman, but she has no clue! 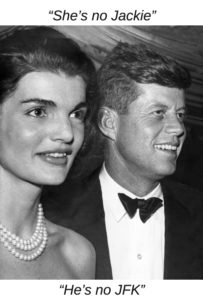 Comparing herself to Jackie Kennedy is an insult. Jackie’s corpse has to be throwing up right now. I was going to turn on some Benny Goodman or Count Basie, but this shit (NRC) is broadcasting some pretty funny stuff. Especially seeing the Clinton ads interspersed with the Donald’s big day. I am laughing so hard right now, I have to stop writing and go pee.

They have been announcing that Melania (Trump’s 3rd) is going to be “taking the stage” at some point today. She’s a “model”. 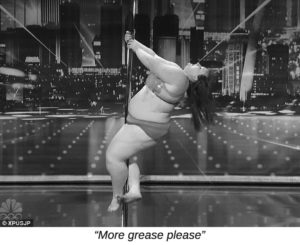 I’d like to see her go up on stage and pose naked on a big white Polar bear rug that the Trump boys shot on a hunting trip to the North Pole. Or maybe when you get right down to it, put a Stripper Pole on the stage. If I were there, I would bring a bunch of dollar bills with me for sure.

The lone shooter in Baton Rouge,  was he a Radical Muslim Terrorist? No, was he an Anarchist? No, he was just another crazy mother fucker who would have failed my psych evaluation. 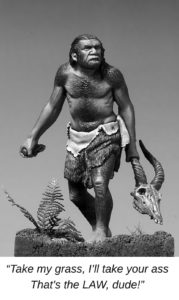 Does our species need Law Enforcement (enforcement of our laws). Of course we need and respect our various policing agencies. They have a tough, thankless job to do,  protecting us from ourselves. My optimism tells me that we have a chance to evolve in a positive fashion, if WE, choose to do so.

News dude says, “There we go, democracy in action”. Bullshit! What an idiot! They take a verbal vote, and the loudest voices win? How about they take a “Herbal” vote, and what ever side has the best weed, wins.