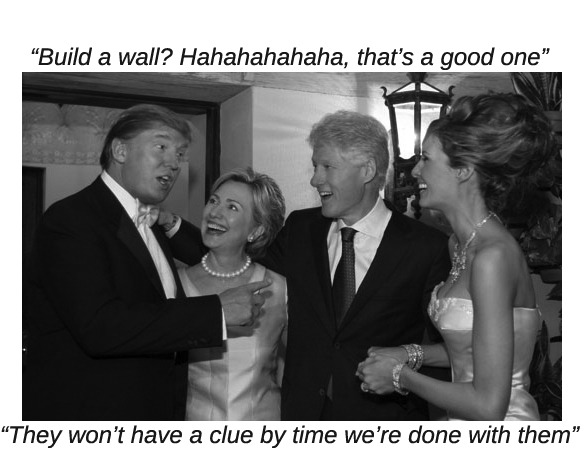 Donald: “I think I can really fuck up the Republicans in 2016”

Bill: “What if you, heaven forbid, win the Republican nomination?”

Donald: “Fat chance, snow balls chance in my pants. If that WERE to happen, I’ll just fire an AR-15 in Times Square. People for sure will vote for Hillary”

Hillary: “Let’s see how it goes. By the way, it’s my turn tonight with Melania”

Bill: “Pretty simple Donny, I guess my “Global Initiative” is to fuck a woman from every ethnic and cultural background on the planet, going country by country”

Melania (in a heavy accent): “After last night, you can check off Slovenia”

Donald: “Melania, I told you to keep your legs crossed even when you are standing up”

Melania (in a heavy accent): “I do not understand?”