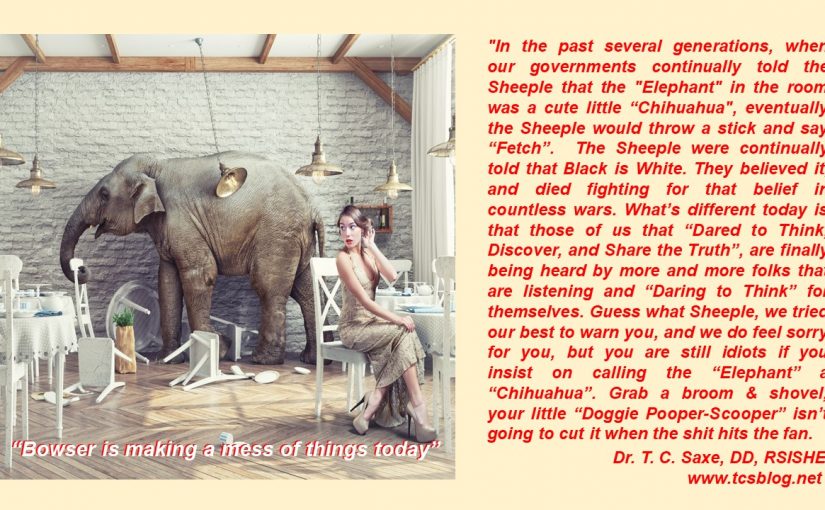 Folks, shit stinks. Elephant shit really stinks (ask me how I know that, based on personal experience), dog shit, cat shit, chicken shit, even human shit stinks most of the time (especially babies that skip the nip and go straight to formula), all shit stinks. Without getting into too much detail, our lives from day one, for generations after generations have been fed a load of bullshit about EVERYTHING!

If we look at recent history, and take it all the way back to the mid 1700’s, it has not only been manipulated, it is falsely recorded and taught, to the benefit of the few that have the control over people and entire societies. The only difference between then and now is the difference between Flintlocks and Nuclear Weapons, and everything that’s evolved in between.

I must inject my own paraphrase here for a famous (disputed) quote from the early 1800’s, “I could give a flying-fuck about your government and laws, I OWN YOU, AND your fucking banks!” (look THAT one up). Point is, regardless of who originally came up with that line, it obviously was a banker, not a farmer. I say that it’s all part of our evolution as a species, (the Flintlocks to Nukes part) and we, as a species are now at a fork-in-the-road. Should we take the “Left or Right” fork?

The fact is, the real truth has been coming out for dozens of years, and for dozens of years, the real truth had been suppressed, altered, propagandized, schmoozed, titillated, diluted, and compressed into the bullshit that the Elite/Cabal wanted us to hear, read, see, preach, and believe. That is what has happened in the case of so many major events throughout recent modern history. I say “Modern History as in, the “Lone gunman that shot JFK” according to the government’s official “Warren Commission Report”, the “Official Report on 9-11”.

What we have experienced here for decade upon decade is the deliberate “Dumbing Down” of the Sheeple by the Elite/Cabal, now with so many instances of “False Flag” operations and misinformation and deliberate “Controlled Opposition” activities by those who are the “Puppet Masters”. This “Dumbing Down” effects every part of our daily lives.

It’s nothing new, it’s been going on for 200+ years or so. It’s just much more sophisticated than it was prior to the advent of radio, television, and the internet, when the only means of distributing “News” to the masses of Sheeple was newspapers and/or dudes yelling out the daily news underneath a street-lamp on a corner.

Sheeple, you can continue to spoon-feed each other the bullshit that is given to you, or open up your eyes, ears, and your minds and do your own fucking research. In other words, WAKE THE FUCK UP! There are plenty of reliable, “vetted” sources out there to research.

For those of us who ARE awake, forget trying to convince the Sheeple that it really is a huge Elephant that’s been shitting in their living room all this time, not a little Chihuahua

Your job now is to figure out a way to ORGANIZE. OK, I’m done preaching for tonight, recognizing that even my own thoughts I write here, and the new Meme I created, is still like a “Single Fly, Farting in the Wind”.

Even though my own ramblings are like that single fly fart, perhaps over time, our collective voices will become “Legions” of us, organized, and eventually successful in helping usher in a new “Age” of Peace and Harmony amongst all of our species.