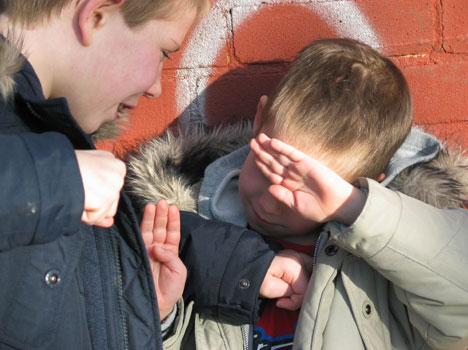 I remember a particularly pleasing and life-lesson event one time way back in 1959 in Grade School. I was in the 6th grade. Every school had their “Bully”, you know, the asshole that had flunked a few grades and was two years older (and bigger) than all the other kids.

It was recess, and as usual, the Bully, Joshua Dingleberrystein, was picking on a different kid than me this time. Joshua was twice the size of this little 5th Grader Billy Sullivan. About five minutes into this oh so familiar, punishing scene, right after Joshua had knocked Billy down with a punch in the nose, another kid, a girl, Alessia, had slipped a pair of Brass Knuckles into Billy’s hand.

Joshua had NOT seen the slipping of the Brass Knuckles into the hand move by Alessia, (where she got the Brass Knuckles from is another interesting part of the story). Anyway, Billy got up holding his right hand out of sight, slightly behind his back. Joshua walked up to take another swing at Billy and out of nowhere, Billy landed the hardest punch that I’ve ever seen by a kid in my school and hit Joshua square in the temple. KNOCKED THE FUCKING BULLY OUT!

The twenty or so other kids including myself, who had been standing there watching Joshua abuse another kid (and all of us sad for Billy, but glad it was not one of us) CHEERED! Billy had knocked Joshua out cold.

The recess bell rang a few minutes later while a few of us were urinating on Joshua’s face (we were only trying to wake him up). Everyone except “Out Cold Joshua” or “OCJ” for short, (his new nickname) went back into the school and to our various classrooms. Mrs. Johnson, my teacher, asked where Joshua was. I said, “We’re pretty sure he’s still out on the playground over by the swings taking a little nap”.

Mrs. Johnson left the classroom and left Alessia in charge. We were reading Shakespeare or maybe it was something about Lincoln, I don’t exactly recall. We all got up from our desks and ran over to the windows to watch Mrs. Johnson as she walked over to where Out Cold Joshua was still laying. Someone said, “Geezus, I hope Billy didn’t kill that asshole”.

Imagine, Mrs. Johnson, knowing what kind of prick this asswipe Joshua was, the whole school including all the teachers knew that Out Cold Joshua was a ruthless Bullying piece of shit, but there was nothing they could do about it because Joshua’s father, Mr. Dingleberrystein was the owner of the only bank in our community, and NOBODY dared to defy him, or upset his applecart in any way.

Everyone, the adults that is, banked there, had loans there, and pretty much were obedient “Customers, of Mr. Dingleberrystein. Mrs. Johnson was successful in waking Joshua up from his nap and walked him in and we reckoned, to the nurse’s office. The school day ended and we all went home wondering what was going on in Joshua’s head, and still laughing about the incident on the playground over near the swings.

We didn’t see Joshua for two days. Two days later, I walked into Mrs. Johnson’s class and there he was, sitting there, quietly. His forehead was all puffed out and black & blue which made him look more like a baboon than he already was. “Hey, OCJ, how the fuck are ya dude?” I said with absolutely no remorse or fear.

Out Cold Joshua no longer picked on other kids, and apparently, the reason why is because when Mr. Dingleberrystein had sought out the who, what, and why of the Brass Knuckles, he found out that they belonged to Alessia’s father, Mr. Calabrese, who had just moved his family here from Chicago. It was kind of strange but interesting to us farm-kids, you know, the word “Mafia”. Mr. Calabrese had opened up a small grocery store in nearby Soderville. Needless to say, Mr. Calabrese didn’t give a flying fuck what Mr. Dingleberrystein thought, “Yes, those where MY Brass Knuckles, you ugly hook-nosed fat fuck”, (someone said they heard Mr. Calabrese say).

The point of the preceding story is to say this. What if some of the ultra-wealthy folks actually pooled their money together and acquired, let’s say, 35,000 packed-for-airdrop (with thousands of cases of ammo) the latest and greatest new Sniper Rifle called the MRAD, (Multi-role Adaptive Design) manufactured by Barrett Firearms Company (design based on their earlier — and wildly popular 98B bolt-action rifle), AND, 2,500 packed-for-airdrop  FIM-92 Stinger MANPADS fire-and-forget missile manufactured by Raytheon Missile Systems, AND 2,000 or so miscellaneous containers,  rigged-for-airdrop, containing medical supplies, water, food (MRE’s), and other items required to sustain an army of normal citizens of Palestine, you know, the people that have been living under apartheid conditions for decades.

Zebrael, what do you think? Do you think that you’re still going to fly those F-16’s and F-15’s over the innocent people of Palestine, dropping your bombs, killing people, and do you think you dare send your troops into areas of Palestine that received the aforementioned weapons? You fucking BULLY! Palestine now has a pair of Brass Knuckles you fucking turds!

Interesting to imagine, wish for, but I am serious about this issue. Zebrael has been the “School-Yard Bully” for generations and this one-sided aggression could be stopped if the people of Palestine were given a pair of “Brass Knuckles”.  Billionaires, let us pool a small portion of your wealth together and turn zebrael into “OUT COLD JOSHUA”.