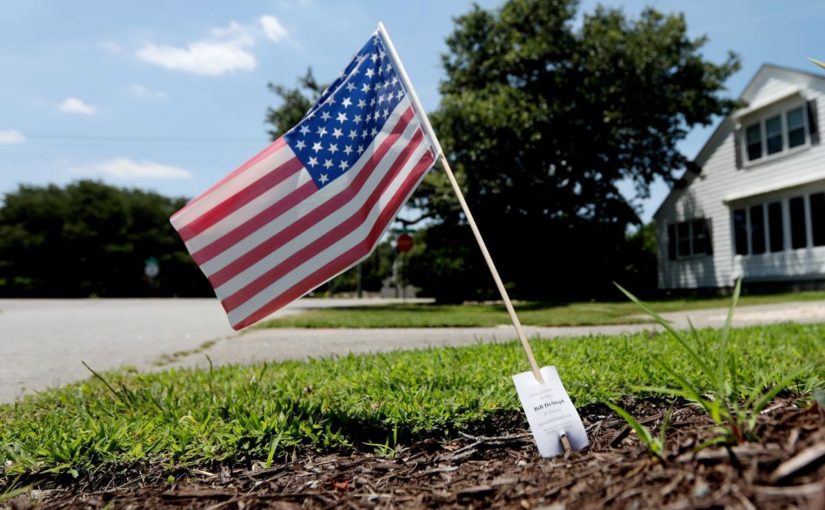 I can remember when my two kids were young, every 4th of July someone would go up and down the streets of Simi Valley planting those little sticks with the American flag in the ground, usually in the grass close to the curb near the mailbox. It was so cool to see the flag at every house on our block, and I imagine there were literally millions of these little flags planted all over America. I forgot who was doing the “planting” in Simi, but I’m sure it was a Veteran’s group of some kind.

One year, after walking out in the front yard and patriotically admiring our little flag early in the morning, I think I had the garage door open, and I was tinkering around with my 1972 Corvette, when I looked out towards the end of the driveway, I noticed that our little flag was gone. Looking up our street I noticed that ALL the neighbor’s flags were “missing in action” as well. I didn’t put a whole lot of thought into it other than thinking, “Well, someone must really love our flag, our symbol of Democracy and Freedom.

The next year on the 4th of July, just like the years before, I spotted our little flag stuck in the soil by the mailbox. Just as I was about to go back in the house, down the street I could see this Hispanic dude on a bicycle plucking every single flag out of the ground at my neighbor’s houses. Since he was coming my direction, I walked out to the curb and stood next to this 6” by 4” flag on a 12” stick. As he was stealing the flag from the next-door neighbor, I yelled out to him as he approached on his bicycle, “Get the fuck outa here man, leave our flags alone. He flipped me the finger and said something in Spanish as he rode away, and out the end of our street, turning on Avenida Simi.

All these years later, I’m sitting on my deck overlooking the ocean here in Ensenada and it dawned on me. After thirty years, I suddenly realized WHY that dude was ripping off all the tiny little flags. I laughed to myself as I thought, “Shit, now I know, the dude was collecting those flags so that he or someone else on his team could stand at the major intersections from Simi to San Diego and elsewhere to wave the flag and sell them to motorists stopped for a red light. Pretty fucking clever I have to admit. Wither it was a fixed price like a dollar bill, or a donation that could bring less or more than a dollar, cumulatively, each flag was worth a ton of money in the grand scheme of things.

I guess the thought that triggered this old memory in part, was that when you are driving on a main road here in Ensenada, like Avenue Reforma (Highway 1) almost every time you stop for a red light at a major intersection, these dudes selling shit like lollipops or whatever, walk past your vehicle selling their stuff.

So, think about that dude from thirty years ago, the dude stealing all the free flags that suddenly appeared stuck in the ground by the mailbox every 4th of July. Just how many flags could a person rip off in several hours in the morning, 100? 500? 1,000? How many OTHER dudes were on their bicycles doing the same thing in Simi Valley? Three? Ten? Thirty?

That day, and every 4th of July, there were millions of flags being pulled out of the ground by dudes on bicycles, all over the country, and thousands of men & women selling these same flags on every major street in America. Kind of sounds like something Gypsies would think of. Pretty fucking smart if you ask me. If I’m ever in that situation again, instead of yelling at the dude on the bike in protest, I’ll be standing there, waving the good ole Red White & Blue and hand it to him as he rides by so he doesn’t have to stop.

Now to the nitty-gritty. America HAS changed, and it is just not the same. With the advent of the computer and all the social sharing sites like Facebook, more and more people, all over the world, are being bombarded with thoughts, opinions, suggestions and information. Information that in many cases is false and in many cases are true. I have formed my own opinions on a wide range of subjects over a long period of time, going as far back as 1963 when they killed Kennedy.

I share an opinion is all, take it or leave it. This year there is a massive amount of folks that have been sharing just how hypocritical folks are to celebrate the 4th of July, with the awakened mind they have discovered just how murderous our society is. The numbers are staggering. The number of innocent people that have been killed by our Military/Industrial complex alone is staggering. Add to that, the deaths that other governments are responsible for as well, and you want to wave a fucking flag while watching the fireworks down at the local park?

There was a time when the celebration of the 4th of July really was in remembrance of the Revolutionary War and the founding of our country. THAT, I still respect and keep in mind every 4th of July. Watching a Jackass standing on his decorated platform saluting the Tanks, and troops as they walk by? So fucking disgusting I feel like WANTING to puke.

For you young men and women in our Armed Forces, don’t take it personally, but I think ALL of you have your heads up your ass and need a little re-indoctrination. WAR IS HELL. WAR IS NOT A GOOD THING. KILLING OTHERS FOR DEMOCRACY AND FREEDOM? I say Bullshit. Do your homework. Find out why, as an example, we even went to war in Vietnam. Then work forward on the timeline from there. False Flags Smalsch Flags, it is now a known fact that our country (the leadership/puppets) have been taking us to war for a very long time for……Wait for it…….PROFIT. If Henry Ford had invented an automobile that ran on hemp, we would be much farther along the road in the evolution of our species, and I don’t think we would have had so many wars and conflicts over oil.

This year especially, considering the mess we are in and the constant threats of more war, think of the 4th of July ONLY as a tribute to the gain of our Independence from the British Monarchy and the founding of our nation. I implore you to ignore what the Jackass Trump is doing today to celebrate himself. I know you are going to find it difficult to find live coverage of his asinine parade anyway because the major networks have decided not to broadcast it.

In closing, today our founding fathers have again, flipped over in their graves and turned their backs on some of you. If you agree with this little homage to the 4th of July, share it, If you don’t agree with my opinions, so fucking what, I could give a flying fuck what mindless sheeple think….BUT, this is America, and you have every right to disagree with anyone, and express your own thoughts and opinions.

Now I think I’ll go light the charcoal, I’m having a really nice, well-marbled Porterhouse, Grilled Veggies, and glass of Chianti. Not because it’s the 4th of July, but because I’m hungry and got a really awesome deal on these steaks.